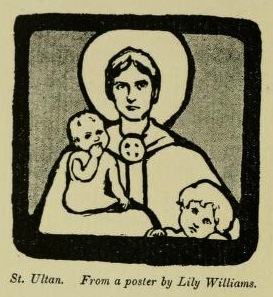 September 4 sees the feastday of the first of the saints with a special link to Saint Brigid to be commemorated this month, Ultan of Ardbreccan. As we will see from Canon O'Hanlon's account of his life below, Saint Ultan is said in some of the sources to be both an uncle of Saint Brigid and to have written a hymn in her honour and compiled a record of her miracles. His other reputation in tradition was as someone who took care of destitute children, whilst maintaining a strict ascetic regime himself:

ST. ULTAN, SAID TO HAVE BEEN BISHOP, OR MORE PROBABLY ABBOT, OF ARDBRACCAN, COUNTY OF MEATH.

DISTINGUISHED for his sanctity and learning at an early period, St. Ultan is said to have been the founder of an ancient Irish See, at present merged in the Diocese of Meath. He is commemorated in the Felire of Oengus, at this date, and with allusion to what must have been a more ancient legend regarding him. In the "Leabhar Breac" copy is the following rann rendered into English, by Dr. Whitley Stokes:—

"The great sinless prince,
in whom the little ones are flourishing,
greatly play the children
round Ultan of Ard Breccain."

At the 4th of September, likewise, in the published Martyrology of Tallagh, we find a festival recorded in honour of Ultan Mac Hua Conchobar. He was therefore held to be of the O'Connor family. An entry is to be found in that copy, contained in the Book of Leinster, and somewhat different. The words "in Ardbrec" are added, as if to intimate, that he belonged to Ardbraccan. He was descended from the race of Irial, son to Connel Cearnach, according to the O'Clerys." He is said to have been related to the great St. Brigid, on the maternal side. Her mother, as we have already seen, was Brodsecha, daughter to Dalbronaigh. St. Ultan is said to have been the brother of Broicsech, daughter of Dallbronach, i.e., they were both of the Dal Conchubhair.

According to very ancient legend, one of his usages was to feed, with his own hands, every child who had no support in Erin. Another account states, that he he had a most charitable care for the infants of those women, who died of the Buidhe Chonaill or yellow plague. The first mention of the Bolgach or Small Pox, appears in the Annals of lnnisfallen, at A.D. 569 ; but, this is supposed to have been a mistake for the leprosy, which was an epidemic about that time; whereas, only about A.D. 675, or 676, did the Bolgach first prevail in Ireland. However, the first outbreak of another pestilence, known as the Buidhe-Chonnaill is said to have taken place in Magh-Itha, in Fotherta of Leinster, in 663; while it seems to have culminated in a still greater mortality the following year. A remarkable eclipse of the sun preceded this public calamity in the month of May, A.D. 664. According to Venerable Bede, it happened on the 3rd of May, the same year, and about ten o'clock in the morning; while, besides the ravages produced throughout Ireland, that pestilence depopulated the southern coasts of Britain, and afterwards extending into the province of Northumbria, it wasted the country far and near, destroying a great multitude of persons. Among those who died of the Buidhe Chonnaill this year in Ireland is mentioned St. Ultan Mac hUi-Cunga, Abbot of Cluain-Iraird or Clonard; and, it is not improbable, he may have been confounded with the St. Ultan, who wrote St. Brigid's Acts. For the exercise of his great charity, when Fursa had been removed from the abbacy of old Mochta of Louth, Ultan was elected. It is stated, he often had fifty, and thrice fifty children, with him together, although it was difficult for him to feed them all. To St. Bracan or Brecain has been attributed the foundation of Ardbraccan Monastery, and from him the place has been named. It seems probable, that Ultan was for some time under his rule in that place. We find it stated, that after St. Bracan had departed for the Arran Islands, our saint became Abbot of Ardbraccan Monastery, in the County of Meath. Ussher supposes Ultan to have been a Bishop at Ardbraccan. He belonged to the Third Class of Irish Saints. This holy man is said to have lived on terms of great intimacy with St. Fechin of Fore. From the latter, it is stated he asked a request. His habit of penitence was accompanied by great austerity. Cuimin of Coindeire remarked, that St. Ultan had a prison of stone, or of boards against his side; and that he used to bathe in cold water, during the prevalence of a sharp wind.

Among the Irish writers, St. Ultan of Ardbraccan has been classed. To him is attributed an Irish Hymn, in praise of St. Brigid. It has been published of late in the Liber Hymnorum. We are informed, moreover, that it was he, who made the Latin verse at the end of it. The Latin poem which comes after the Life of St. Brigid by Cogitosus, was written by him. It begins with "Cogitis me Fratres." Its style is similar to that in the Book of Kilkenny; yet, it is not the same production. In the time when the two sons of Aodh Slaine were Kings, Ultan is said to have composed the Life, as also the Latin and Gaedhlic Poems. Others think St. Columba was the author of the Hymn. The Third Life of St. Brigid, as published by Colgan, is assigned to the authorship of St. Ultan, Bishop of Ardbraccan. This Manuscript Life was received from the learned Father Stephen White, an Irish Jesuit, who was well versed in the antiquities of his native country. The author does not publish his name, says White; he nevertheless, reveals himself, as being from the Island of Hibernia,and as being of Irish origin. That St. Ultan was the author of this Hymn, and consequently of the Third Life, would seem to be established, in Colgan's opinion, from certain remarks of an old Scholiast, on the same Hymn. Those comments are given in a note. Even, although the Scholiast doubts, whether St. Nennidius, St. Fiech, or St. Ultan be its author, his very words are thought to be conclusive, in showing this latter, to have been the writer, both of the Life and Hymn, since he is said to have composed both one and the other, in praise of St. Brigid, and both were contained in one book. The Scholiast even cites a portion of a line, from this Hymn, which agrees with what has been published, by Colgan. Now, it is not known, that St. Nennidius or St. Fiech wrote a Life of St. Brigid, whether in one tract, or in more than one part.

...To St. Ultan has been attributed the spirit of prophecy. It is said his prophecies remain in metre, and in the Irish language. A prophetic poem extant is ascribed to St. Ultan of Ardbraccan. He is said to have foretold the arrival of the English in Ireland, and that they should annex it to the Kingdom of England. He is stated also to have been the teacher of Tirechan, who wrote from the dictation of Ultan, two Books, on the Acts of St. Patrick. These Books are yet in manuscript, and Archbishop Usher frequently quotes passages from them, so that we may conclude, he had them in his possession. These Annotations are in the Book of Armagh. Ultan is said to have written a Life of St. Patrick, but this is uncertain. It was he, as we are told,that collected the miracles of St. Brigid, into one book, and he gave them to Brogan Claen, his disciple. It is said, likewise, that Ultan commanded him to turn them into verse, so that it was the latter that composed, " The victorious Brighit loved not," as it is found in the Book of Hymns.

St. Ultan died at Ardbraccan, about three miles from Navan, in the present County of Meath. He is said to have completed the extraordinary age of one hundred and eighty years. The O'Clerys' Irish Calendar even adds, that he was one hundred and eight-nine years old, when he resigned his spirit to heaven. This does not seem, however, to rest on any sure basis of calculation. He died on the 4th day of September. According to the Annals of Clonmacnoise, his death occurred, A.D. 653; Ware has it at the date 655; but according to the Annals of Ulster, those of the Four Masters, and most other authorities, it happened a.d. 656. The Annals of Ulster again note his death, under the year 662 ; and, as they state, according to another Book, which had been in possession of the author. In the Martyrology of Christ Church he is recorded as a Bishop and Confessor, at the ii. Nones of September. He is not noticed, however, in the Calendar prefixed. By Greven he is set down as Vultan, at the 4th day of September, and as an Abbot in Ireland ; while a similar entry is given in the Florarium Manuscript, in possession of the Bollandists. The Martyrology of Donegal registers him as Ultan, Bishop of Ard-Brecain, at the 4th day of September. At this same date, he has been commemorated in Scotland. Thus, in the Kalendar of Drummond, he is mentioned with special eulogy.

The feast of this Saint had been celebrated with an office in former times, as we learn from various manuscripts still preserved. Even local traditions regarding him exist. In the demesne of the Protestant bishop of Meath, near Ardbraccan, St. Ultan's well is still shown. It is circular, and in diameter it measures nine feet and a half. It is reputed sacred, and to a period not far distant, stations were there made on the vigil of St. Ultan's feast. Several other holy wells and stone crosses, bearing his name, exist in the County of Meath. Long after St. Ultan's time, A.D. 784, we read of a Translation of his relics at Ardbraccan. The monastery and its abbots appear in our annals; but the ravages of the Danes are often recorded, during the ninth, tenth and eleventh centuries. At length, the abbey of Ardbraccan fell into dissolution, and the town into obscurity, after the English Invasion.