September 8 is the feast of yet another Irish saint who flourished in seventh-century Europe, Disibod of Disenberg. Below is an account of him and of his hilltop monastery taken from a modern scholar's work on the places associated with the Irish in Europe: 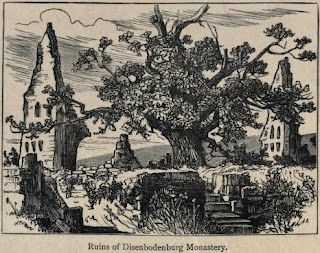 Disibod/Dodechin - perhaps Dubh dá Chrích?.. Not alone a great monastic ruin on a hilltop in the Palatinate keeps posterity aware of him, but hagiography proffers two separate Lives of the saint, both dating from the twelfth century and hailing from the same place. The first document, the Vita Sancti Disibodi, was written by the famed Hildegard of Bingen who died in 1179, having spent the first part of her life in the nunnery of the Benedictine abbey that superseded Disibod's foundation. Further at our disposal is a chronicle compiled in the scriptorium of that same monastery, the Annales Sancti Disibodi.

...This 'Sybil of the Rhine', as Hildegard was called, may well have been unwittingly influenced by traditions of the irish Church passed down in her monastery, causing her to embark on medical studies that were to bring her lasting fame. A herbarium was part and parcel of every irish monastic settlement, as can be perceived in religious institutes based upon some foregoing 'hospitale peregrinorum et pauperum' named in early charters. Charity implied medical care, the existence of a herbarium was a prerequisite.

The monastery of Disibodenberg was certainly no exception. Its ruined many-storied hospice protruding from the hill's wooded crest dates from the twelfth century period of Hildegard von Bingen. .. Halfway up the ascent to the monastic site the road, flanked with vineyards, passes a farmhouse. This is the Disibodenhof, housing a small museum. Its importance lies in the claim to be the site of Disibod's original monastery. There he was first interred, fulfilling his wish for a humble burial.

Already during his lifetime recourse to the monastery caused it to overflow and make a transfer necessary. The plateau on the summit of the hill was chosen to accommodate the many converts desiring entrance into the abbot's religious order. The later translation of Disibod's remains to the hilltop sanctuary caused a new stream of followers, this time pilgrims to the patriarch's grave coming to show their respect and pray for indulgences in the abbey church. The precincts became a pivot around which for centuries to come the religious life of the region centred.

Disibod was a man of mature age on his appearance in the Rhine confines of seventh century Merovingian France. Not stated in the Vitae are his previous whereabouts, nor is his itinerary known. The supposition is that he came in the general movement north of prelates from Aquitaine, or the Poitou. Treated with veneration on arrival with a small attendance in Trier, Disibod was granted the site of his choice for a missionary station in the Palatinate. The allotment was made by the Merovingian ruler seated in Trier, who pronounced the forthcoming monastery crown property. The Franks were intent on re-activating not only Trier's bishopric but also the episcopal seats of the Romans on the west bank of the Rhine. The aim was to form a chain of defence against the barbarians across the water. the Merovingians regarded the conversion of the Teutonic tribes beyond a political necessity. By donating Disibod's missionary station to the archbishop of Mainz, the position was strengthened. The Irish abbot became, however, a tool of Frankish expansion policy, Mainz, together with Trier, forming the spearhead of the campaign.

There is a thread of tradition implying that Disibod left Ireland in the company of St Kilian having crossed the Rhine at Mainz, Kilian made his way up the river Main only to be murdered with two fellow evangelists in Würzburg in the year 688. This immolation Disibod was spared, wisely keeping as he did to the west bank of the Rhine. He was following a vision, being directed to the site of his destination by an angel. He recognised the predicted height 'where two streams meet' in the angle of the rise jutting out between the river arms of Glan and Nahe. Here he stopped to settled for good, reaching the then biblical age of eighty-one.

Disibod was treated with great esteem in hagiography. His clemency, his healing powers and ministry to the poor are documented...

Disibodenberg abbey was badly exposed to Viking and Hungarian incursions of the ninth and tenth centuries. This is known from the reported visit of the archbishop of Mainz to the ravaged site in the year 975. Dismayed at the conditions he found, including the state of the holy founder's grave, he caused twelve canons to be installed there. Admirers of the Irish engagement in Europe, they did their best to repair the damage and revitalise devotion to Disibod in the hearts of the people.

A hundred years later Benedictine monks took over what was by then a souble monastery, to be followed in 1259 by Cistercians with their reforms. This was the abbey's richest period. A magnificent basilica crowned the hill, in which Disibod's remains, together with those of his three Irish companions, were exposed to veneration in an ornate marble sarcophagus before the high altar.

Note: A couple of Hildegard's 'Songs for Saint Disibod' can be found on the blog here.

Dear Marcella, Would you have any sources for when St. Disibod was made a saint? I have looked and even in Hildegard's hagiography she calls him "beati" Dysibodi and only refers to "Monte sancti Dysibodi" a couple of pages toward the end of her Vita on him. I haven't been able to pinpoint the date when he was made a saint. It appears that he was perhaps sanctified very soon after his death, yet it took Hildegard 800 years to be made a saint in 2012 by BXVI. Any ideas of where to look for this info? Thanks, Janice

Hello Janice, I am not aware that he ever was formally canonized. I wouldn't be surprised if, like Hidegard, and certainly like the vast majority of the saints of Ireland I write about at this blog, he would have been acclaimed a saint following his death but never went through any formal process of canonization.