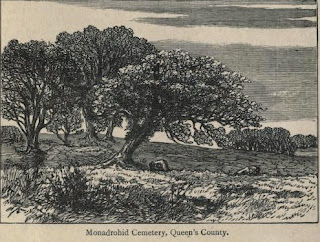 On September 16, the Irish calendars commemorate Saint Laisren of Mundrehid, County Laois. Father William Carrigan included the following account of this holy abbot in his diocesan history of Ossory:

The townland of Mundrehid lies in the Barony of Upperwoods and civil parish of Offerlane. Being situated on the north bank of the river Nore, it originally belonged to the territory of Leix, and was not annexed to Ossory till about the 10th century. There was a monastery here in early times. The Four Masters record the obits of two of its Abbots, thus:

The latter abbot was probably identical with St. Mainchen, surnamed the Wise, of the Church of Disert Gallen, parish of Ballinakill, whose feast day is the 2nd of January.

St. Laisren (pronounced Leshareen), also called Laisre, Molaisre, Molaisse and Laserian, the founder of Mundrehid monastery, and, later on, the patron of Mundrehid church, was son of Lughdech, son of Nathi, a descendant, in the sixth degree, of Cathaoir Mor, Ard-Righ of Erin. He must not be confounded with his namesake, the patron of Leighlin Diocese, who was son of Cairrill, a prince of Uladh, and whose festival occurs on the 18th April. The acts of the life of St. Laisren of Mundrehid are not recorded. His feast day is Sept. 16th, on which the Martyrology of Donegal commemorates him, thus:

"Laisren of Mena: i.e. Mena is the name of a river which is in Laighis; or it is from a bridge (droichid) which is on that river the place was named, i.e. Mena. He was of the race of Cathaoir Mor, Monarch of Erin"

The text of the Feilire of Aengus on the same day has:

"The day of Laisren the great of Men."

On this passage the scholiast of Aengus comments thus:

"That is Men the name of a river which flows between Dalaradia and Kinel-Owen as they say. and Molaise dwells on its bank. Or, Molaise of Mena-Droichit, i,e. Men the name of a river which is in Laighis. Or, Mena-droichit, i.e. it is a smooth bridge (is min droichet), to wit, a certain congregation of many saints were once at that town for some cause, and a certain robber, one of the inhabitants said, 'smoothly (min) have all those come (doroichet) to us; and one of the visitors said, ' this shall be the name of the place, Smoothbridge (Mindroichet)."

From these extracts it is plain that Mundrehid, or Mena-droichid, signifies the bridge over the river Mén (pronounced Mayne), now the "Thoorthawn river," which, rising in the Slieve Bloom, and flowing between the townlands of Ballyduff and Thoorthawn, crosses the public road at Mundrehid, under a modern bridge or droichid, and soon empties itself into the Nore. It may be well to note that Mén is the nominative case; Meana (pronounced Mayna) is the genitive form.