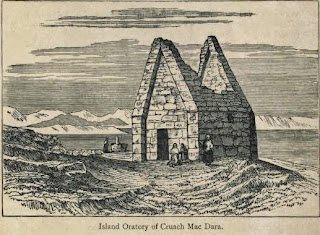 September 28 is the feastday of an island hermit saint of the west, Sinach Mac Dara. Mac Dara is still used today as a Christian name for Irish males in the Connemara Gaeltacht area. Below is an account of Saint Mac Dara's life and some interesting folk traditions associated with him, from Volume 9 of Canon O'Hanlon's Lives of the Irish Saints:

OF this holy anchorite little is positively known, and yet his name and veneration have survived for many ages. He is much venerated by inhabitants on the western shores of Galway. He must have flourished at a very early period, however, and most probably at a time, when his remote position secluded him from cognizance of our ancient chroniclers. Tradition asserts, that the name of our Saint's father was Dara ; and Sinach, his own peculiar name, was placed before Mac Dara, that by which he is now popularly known. However, the St. Mac Dara of the western coasts should be called Sionnach, which was his real name. At the 28th of September, Marianus O'Gorman sets down Sinach in his Festilogy. His commentator has a note appended to his name which states, that he was from Cruach mac Daro. From other Irish Martyrologies regarding this saint, we can glean no particulars.

On the south-western shore of a peninsula, anciently called Iorrasainteach, lies a small Island, presenting to the sea on all sides rocks which are high and precipitous, except towards the eastern part, where boats can safely touch. The appearance of this Island from a distance, coupled with its relation to our saint, gave it the name of Cruach Mac Dara, which when anglicised means, "The Rick of Mac Dara," or ''The Island of Mac Dara." Near the landing place on this Island, St. Sinach Mac Dara is supposed to have built a small stone church, the ruins of which yet remain, and are in a good state of preservation. Besides this ruin, a circular or rather oval stone-house, twenty-four feet by eighteen, with walls seven feet in thickness, is yet to be seen, although in a very dilapidated condition. This was probably our saint's usual habitation, and the church might have been chiefly in use, as an oratory. At the distance of 300 feet from this church, and on its northern side, a square altar, surmounted by a cross, and a holy well near it, are pointed out to strangers. Both are dedicated to St. Mac Dara. He seems to have led a secluded life on the Island bearing his name, and one devoted to the practice of most austere religious rules and duties. According to a custom, usual in our old Irish churches, the wooden statue of this saint was preserved in his chapel for many centuries subsequent to his death—this image being commemorative of the founder and patron, whose intercession was invoked. However, for special weighty reasons, the Archbishop of Tuam, Malachy Queely, caused its removal during the time of his incumbency, and had it buried under the ground. Besides the veneration paid our saint on this Island, the inhabitants of Moyrus Parish, on the shore of the opposite mainland, point out the ruins of an old parish church, which is dedicated to him. There, in the time of Roderick O'Flaherty, [i.e. the 17th century] "his altar stone, by the name of Leac Sinach," was kept as a venerable relic... Here, the coast inhabitants, who are principally fishermen, assemble on the 16th of July each year, to celebrate the festival of their patron of Moyrus parish. At this date, however, we find no mention of Sinach Mac Dara, in our Martyrologies. The principal festival of our saint is noted in the Irish Calendar, as occurring on the 28th day of September. This day may probably be assigned, as that for his departure.

Many miraculous occurrences are recorded, and some superstitious observances are said to have been practised in connection with this saint's memory by recurring to local tradition. One of the latter practices was the collection of Dunleasg or salt sea-leaf, at low water, by women, in order to obtain the release of some friend in captivity: this reprieve, however, they expected should be obtained chiefly through the intercession of our saint. This practice of gathering Dunleasg has been disused for many years past ; although old people are yet living, who remember its frequent observance.

In the time of Roderick O' Flaherty, it was customary for all boats, passing between Mason-head and the Island, to lower their sails three times, in honour of Mac Dara. In the year 1672, a certain captain of Galway garrison, passing without the usual mark of reverence, experienced such a violent gale, that he made a vow of never again sailing by without a proper obeisance; he was shipwrecked shortly afterwards, and never reached his destination. One Gill, a fisherman of Galway, during the prevalence of fair weather before and after the occurrence, was struck dead almost instantaneously, by a stroke from the mast of his own boat, when it fell on his head. This accident, like the former, was attributed to that contempt shown towards our saint by a departure from the time-honoured custom. His altar-stone, called " Leac Shinac," was said to have been preserved to the middle of the present century ; but its whereabouts is not now known. The name Mac Dara is a very common prefix to surnames of many Islanders and borderers, on the Galway coast, and even boats and hookers belonging to its fishermen are inscribed with the name, in token of veneration for our saint.