September 2 is the feastday of a County Kildare saint, Seanan of Laithrech-Briuin. Canon O'Hanlon begins his account with a lament that he is one of the many Irish saints of whom we know little:

WE have frequently to lament the loss of records, which might preserve the particular virtues and actions of individuals for the edification and emulation of all true Christians. As noticeable throughout all the previous volumes of this work, with the most earnest desire to render its several articles, more complete, documentary or traditional materials are not accessible, to rescue from obscurity the earthly career of so many among the children of light. Merely to learn their names—sometimes also those of their old places—and to know that they had lived, are all that can now be ascertained.

According to the Feilire-Aenguis, the Feast of St. Senan was celebrated in Lathrach Briuin, or Laraghbrine, in Ui-Foelain, on the 2nd of September. In conjunction with two other holy persons, Molotha and Theodota, the saint is praised for his noble qualities, and for their reward through Christ. The commentator identifies the present saint as connected with a well-known place. According to the Calendar of the O'Clerys, he belonged to the race of Eochaidh, son of Muireadh, who descended from the seed of Heremon. We are told, likewise, that Deidi, daughter to Trian, son of Dubhthach, was his mother. The pedigree of St. Senan of Laraghbrine is contained in the "Sanctilogic Genealogy." There he is called the son of Fintan, son to Strened, son of Glinder, son to Core, son of Conned, son to Aengus, son of Fieg, son to Mail, son of Carthage, & etc. His genealogy is then carried back to Heremon for fifty generations, or for about 1600 years. Marianus O'Gorman has noted this saint, in his Martyrology, at the present date. St. Senan must have flourished in the sixth century, and been a contemporary of the great St. Columbkille, for he is named as one of those ecclesiastics who attended the great Synod, held at Dromcreat in 580. On the 2nd of September, a festival is entered in the Martyrology of Donegal, to honour Seanan, of Laithrech Briuin, in the territory of Hy-Faelain. This place is also written Lathrach-Briuin. At present it is known as Laraghbrine, or Laraghbryan, where there is an old church and a cemetery, near Maynooth, in the Barony of North Salt, and County of Kildare. 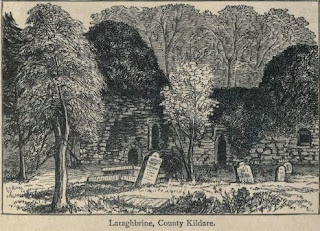 The mediaeval church ruins of Laraghbrien are to be seen embowered with stately lime trees, and within a squarely-formed grave-yard, surrounded by a quadrangular wall. A gravel walk runs parallel with the walls on the interior. The church ruins measure 87 feet in length, exteriorly: they are 19 feet, 8 inches, in breadth. The walls are nearly 3 feet in thickness. There is a square tower, 13 feet by 15 feet, on the outside ; and, it is entered by a low, arched door-way from the interior. Several square-headed opes are inside of it, and a ruined spiral stairway occupies one angle. This leads to a broken part of the wall, and showing that it ran much higher. There is a large breach in either side wall. Some ruined windows remain. Two of them have elegantly dressed heading and side stones, and in these formerly were iron bars. The building materials are of excellent limestone and mortar. There was a door in the north side-wall, parallel with the road from Maynooth to Kilcock. Circularly-arched door-ways and windows splayed are still to be seen in the walls. Traces of plaster are inside and outside the building, showing that it had been used for purposes of worship, and at no very remote date.