September 21 sees the commemoration of an Irish hermit and martyr, Landelin, or Landelinus in Latin. Roísín Ní Mheara describes what is known of his life and of how his memory has been kept alive for over a millenium in the area of Europe in which he flourished:

In Murbach we are in reach of the famous Alsatian wine route bordering the Rhine. There one should look out for Rouffach, a small town where, on the gentle slope of its vineyards large letters proclaim: CLOS ST LANDELIN.

The choicest of Alsatian wines are produced here in Rouffach, and stopping to savour them we honour both saint and proprietor who is proud to greet a guest from Landelin's homeland. Studying his wine-card we read in French: 'Saint Landelin, an Irish prince, came to preach the Gospel. Around the year 640 he suffered the death of martyrdom. In the eighth century the bishop of Strasbourg donated to the 'Monks of Landelin' stocks cultivated on the best wine-growing slopes of Alsace, since titled 'Saint Landelin's Vineyard'. 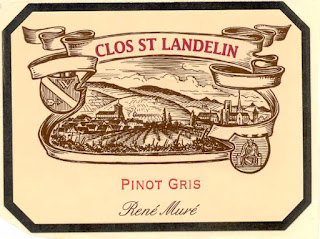 Landolin the Martyr and his cult

A leap over the Rgine back into the Ortenau (Breisgau) will take the curious to the haunts of this Landelin (Landolino; in the oldest form Lendlin). It is a way taken since time immemorial by the inhabitants of Rufach (Rouffach) and other Alsatian parishes to Ettenheimmunster. There they take part in a long procession, headed with a silver bust reliquary carried on a bier, and an old Landelinus-Litanei is sung while they trace the grounds of the abbatial domain, long since disappeared. Riders also make the round, carrying a banner and a relic of the saint, and their horses are blessed on the green beside the holy well. The beautiful and imposing church of St. Landelin adjoins the well's sanctuary. Built in 1688  and enlarged again in the eighteenth century to serve the never abating concourse of visitors, it superseded former pilgrim churches built on the spot where the saint was martyred. The new altar, erected by the abbot of Ettenheimmunster, carried an inscription in golden letters - S Landelinus Scotiae Regis Filius, followed by a Latin hymn of praise with an explicative second verse that runs:

Today the high altar of St. Landelin's has an oil painting of the 'glorification' of its patron, while a side-altar shows him in a wooden statue as a young man. Only in the baroque period did this youthful image appear; older ones portray Landelin as a mature, bearded man, often crowned in princely robes. On the ceiling his legend is told in seventeen frescoes, the first two of which, starting to the right of the west entrance show the saint's departure from Ireland.

It seems that the cult of St. Landelin set in straight after his death at the hands of a local huntsman, infuriated by the conduct of his hounds, which refused to chase deer in the vicinity but became meek and docile when nearing the hermit's cell. The huntsman had the backing of his pagan lord, Gisico, who considered Landelin a sorcerer.

There in the glade, where Landelin lay outstretched in his blood, spring water gushed forth from under the severed head and at each limb's extremity. The five sources (some legends say there were four) soon formed a basin, to which the natives resorted, and bathing, found healing there for many ills.

Anchorites, settling in the neighbourhood, were gathered together in the early eighth century by the bishop of Strassburg to form a colony and provide for the increasing number of pilgrims to the spot. Out of this the first cella monachorum grew, with time, the impressive resort we find there now.

It was Etto (Eddo), the succeeding bishop of Strassburg in the eighth century, who caused another monastery to be erected a little further up the valley for thirty Benedictines. Etto was deeply impressed by the miracles at the well, over which he had a new sanctuary built. His interest may reflect Irish sympathies for, before becoming bishop of Strassburg, he was abbot of Reichenau, in direct succession to Pirmin.

Etto's monastery, built in honour of Landelin, was given the name of its founder - Monachium divi Ettonis - and became 'Ettenheim-Munster'. Incorporating the pilgrim church of St Landelin's, it cherished the saint's memory through more than a thousand troubled years.

Nothing remains but a monastery wall of this once great seat of learning, a centre of theology and music, which radiated into the Rhine valley and influenced its spiritual and cultural life for centuries. The percussions caused by the French Revolution and the Secularization of 1803 saw its library scattered, its archives in ashes, its monks finally dispersed and the huge complex razed to the ground after having served as a a factory. This all has left us with a great void, concerning Ettenheimmunster's early history and also that of its Irish patron saint.

Of the few items salvaged from the abbey after confiscation in 1803 the most precious was the bust reliquary of Landeling, made in 1506 as a recipient for the saint's skull. It was taken to the pilgrim church of St. Landelin, acting from then on as the parish church, and is kept in the sacristy. It is exposed on special occasions. That it was saved goes to the credit of an undaunted parish priest, pouring condemnation on the heads of those involved in transporting the bust on a cart to the smelting foundry. To eschew the fires of hell they unloaded it, dropping it into a ditch.

The reliquary, a prime work of art of the late Gothic period, portrays the bust of St. Landelin in chased silver. Bejewelled and embossed, it contains the saint's skull, and has, inserted on the chest, a figuration of the martyrdom, whereby circles around the outstretched limbs and severed head demonstrate the pools of rising water. Scenes from the life of the saint surround the base of the reliquary, and these are especially interesting for they follow early legends that were recorded from oral tradition. Here the true peregrinus confronts us, with satchel and staff. This is what we are told:

Crossing the Rhine, into the wilds of the Alemanni, Landelin makes his first stop at the house of a certain Edulf, where the village of Altdorf now stands, at the foot of the northern Black Forest range. Here he wanders off up the valley of the Undiz to where it is joined by the Luttenbach, a little stream - today Lautenbach - and builds himself a hut in the forest glade. Animals befriend him, especially deer, who brings him food. There fate overtakes him.

Full of misgivings, Edulf's wife and three daughters set out from Altdorf to search for Landelin, accompanied by a guide. One of the daughters is blind, and when they come across the body of the murdered hermit, she is left behind weeping, while the others go for help. She touches her eyes with fingers stained from Landelin's blood, and her eyesight is restored. Returning with the intention of bringing their friend's corpse back and over the Rhine to receive a Christian burial, which could not be afforded on the right side of the river, Edulf's family are convinced by the miraculous cure of the hermit's sanctity. They carry his remains down the valley, to a place where, having put the load down for a rest, they find it impossible to raise it again. Even a team of oxen brought there with a cart, cannot move the corpse. This, it is decided, is a sign from heaven that Landelin wished to be buried there, and that they proceed to do. They stick the hermit's staff into the grave to mark the spot. It sprouts green leaves and eventually grows into a huge oak tree.

The church that was built there, where first anchorites had their hermitage, is the Munchweier parish church of today. There under the mensa of the altar is the tomb with Landelin's relics. The centre of the cult, however, has always been the site of his martyrdom and the wellhouse with the holy sources.

Since Landelin's Irish origin is today questioned for no other reason than his name 'sounds Frankish', it would be gratifying to find in the genealogies of Ireland a (F)lann, born around 600, who went abroad on a pilgrimage of no return.

Hello! I am trying to uncover the identity of the person who would fit this description: an initiate of the Hibernian Mysteries in the 9th century, who leaves with some of this pupils to found a new impulse in Alsace. Thanks!

Sorry, I have no idea what "Hibernian Mysteries' are. What's the source of your info? There are various Irish saints associated with the Alsace region but most went there before the 9th century.