On January 23 the Irish calendars commemorate Saint Lucán of Tamhnach. The problem appears to be in identifying whether the locality associated with the holy man lies in the lakeland county of Fermanagh, or in County Dublin. Canon O'Hanlon's account though starts off by saying that the place name Tamhnach is not a common one in Leinster and is illustrated by Wakeman's sketch of the Fermanagh site: 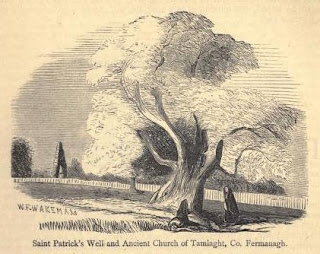 In reference to the etymological meaning of this saint's place, we are told, that Tamhnach (Tawnagh) signifies a green field, which produces fresh, sweet grass. This word enters very generally into names in Ulster and Connaught, especially in the mountainous districts; it is found occasionally, though seldom, in Leinster, and still more seldom in Munster. In modern names it usually appears as Tawnagh, Tawny, and Tonagh, which are themselves the names of several places. In the north of Ulster the aspirated m is often restored, and the word then becomes Tamnagh and Tamny. In composition it takes all the prreceding forms, as well as Tawna and Tamna. We find, according to the Martyrology of Donegal, that Lucán of Tamhnach, was venerated on this day. And in the Martyrology of Tallagh, we meet a nearly similar entry, on the 23rd of January. The Irish form of his place, is Anglicized, Tawny. There is a Tamhach-an-reata, now Tawny—said to be in the parish of Derryvullan, barony of Tirkennedy and county of Fermanagh. Not far removed from this, on the townland of Derryvullan, in a parish bearing this same name, is represented a "holy well," beside the modern Protestant church, and close to Tamlacht Bay, on the River Erne. In Tamlacht, belonging to this parish, there is an ancient church, and "St Patrick's well," which flows beside a gigantic tree. There is likewise a parish, called Taney or Tawney, in the half-barony of Rathdown, and county of Dublin. Here the old church-site and cemetery may be seen delightfully situated on a green knoll, near the railway station at Dundrum. Prior to 1152, it is said, this was a rural see. St. Laurence O'Toole, in 1178, confirmed  its possessions to Christ Church Cathedral, Dublin, under the title of  "Churchtown with the Grange of Clonskene." It does not seem an easy  matter to determine the site of this saint's church nor his period.