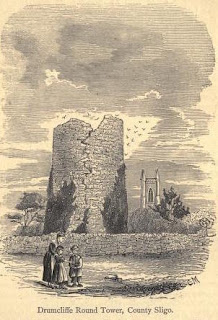 Among the saints commemorated on the Irish calendars on January 6 is a County Sligo holy woman, Muadhnat of Caille. As Canon O'Hanlon explains below, she is one of three saintly siblings, the Daughters of Nadfraich:

In numerous instances, we find it was customary in the Irish Church to venerate, on the same day, saints of a particular family, community, or place. Nor is it probable, that all such persons could have died on that particular festival. It rather appears to have been a matter of convenience, thus to classify and unite them, for various good reasons. The present holy woman, and the other two virgins, who follow in order, are said to have been the daughters of Naidfraic, and sisters to St. Molaissius, Abbot of Devenish. The Martyrologies of Tallagh and of Marianus O'Gorman, as also a Commentator on St. Aengus, place the festivals of those pious sisters at the 6th of January. They were venerated at a place called Enac-ard. We find that Caille is said to have been the name of St. Muadhnat's habitation. It seems to have been situated in Cairbre, and near Drum-cliabh. This was probably her natal place. It is now known as Drumcliffe, a parish in the barony of Lower Carbery, and county of Sligo.  It lies near the sea-shore, a little to the north of Sligo, and it is situated within the diocese of Elphin. A portion of its round tower here remains, as a proof of its ancient consequence. St. Columkille is said to have been the first founder of a religious establishment, at this place. From the sixth century, Drumcliffe had its abbatial succession, and the herenachy of the Church became limited in the eleventh century to the family of O'Beollain or O'Boland. To St. Columkille is attributed the poetic sentiment of attachment to this spot :—

Beloved to my heart also in the West—
Drumcliffe at Culcinne's strand.

Its situation is one of great attractiveness to the tourist, and yet in a district but little frequented.

The present Protestant church stands on the site of an ancient religious establishment; while many relics of the past are observable throughout the parish. We are told that a religious house had been founded here by a St. Fintan, a disciple of St. Columba, at a place called Cailleavinde. This was probably the Caille, where St. Muadhnat's Convent stood.

St. Muadhnat is mentioned in the Martyrology of Donegal, as having had a festival on this day. She lived in the sixth century. In the table appended, she is also called Muaghneat, i.e., Mo-Aignes. In the published Martyrology of Tallagh, we find a notice at the 6th of January, Ingen Natfraich, in Enach-airdd. There is probably a mistake for Ingena, the plural form, and which relates to the festival of Natfraich's daughters. Likewise, incorrectly joined, there is an entry together with St. Diarmaid, whose feast occurs this same day.
Posted by Marcella at 06:30