On June 10 we commemorate the memory of an Irish abbot/bishop of Rathlihen, County Offaly. Illadan, like many of the early Irish saints, boasts an impressive aristocratic pedigree and whilst he has left no written Life of his own, he features in the hagiography of another saint, Aéd of Killaire. In the Life of Saint Aéd he acts as a mentor to the boy Aéd and discerns that he is destined for greatness. Canon O'Hanlon's entry for Saint Illadan tells us something of the locality where the saint flourished and includes a description of the sad fate of its church ruins. Today such remains would come under the protection of the law but then they were seen as fair game for reuse. O'Hanlon is unimpressed by this 19th-century recycling initiative and censures the local people for allowing this act of Vandalism (spelt with a capital 'V' in those days!) to take place. I have reproduced the sketch of the church ruins at Rathlihen, from page 613 of Volume 6 of the Lives of the Irish Saints. We also learn that in the 17th century, the Irish hagiologist, Father John Colgan, saw a statue of Saint Illadan, which depicted him in episcopal splendour but which had since disappeared:

A few particulars only are recorded of this holy man, and these are to be found chiefly in the Life of St. Aidus, Bishop of Killare. The pedigree as given in the Irish Genealogies refers his origin to the pagan Monarch of Ireland Laoighre, who was contemporaneous with St. Patrick, and whose death is- recorded with curious incidents, at A.D. 458. To the latter, he was great grandson, being third in descent. This holy man called Illadan or Iolladhan was son to Damen, son of Ennius, who was son to Laoghaire, King of lreland. He is also named Illand or Illandus. He was descended from the race of Niall of the Nine Hostages, as we can glean from the foregoing pedigree. It is not improbable, he had been born in that particular part of Meath province, with which his memory is especially connected, and in the earlier period of the sixth century. According to Ussher, our saint flourished, in the year 540.

Having left the cares of this world, Illand became Abbot over some monks, at a place called Rathlibhthen, in a part of ancient Meath, called Feara Ceall. This now comprises Ballycowen and Ballyboy baronies, in the King's County. The place called Rath Liphthen, in Firceall, Meath, where he was venerated, has been identified with Rathlihen, or Rathlin, a part of Killoughey parish, barony of Ballyboy, in the King's County. This place is Latinized Arx Libteni; and doubtless, it was so called from an ancient Fort, which rose near the site of the old monastery, and probably at a much earlier period than the erection of the latter building. It has been known as Rathlibhthen, a townland denomination a few miles from the town of Frankfort, in the King's County. It is also written, Ralihin, and Rath-Jihin, but locally pronounced Rawleen. We have no means for knowing if our saint had been the original founder of the first monastery in this locality; yet, it appears highly probable, as he lived in an age so remote from the present time. Here, there was a school, in which the Sacred Scriptures were taught, as also where secular learning was cultivated. It is supposed, this saint founded his monastery, about the middle of the sixth century.

St. Illand was a principal instrument, in the hands of God, for determining the ecclesiastical vocation of St. Aidus, Bishop of Killare, whom he instructed, and sent on his mission. Our saint, besides being Abbot, exercised episcopal jurisdiction, also, as we find him called Bishop, in the Life of St. Aidus. The ruins of an old church yet lie within Rathlihin townland, in Killoughy parish. An enclosed cemetery now surrounds them. Only a few years back, the plan and form of the old chapel were distinguishable. But the stones—excepting some of those in the west end—were torn down, and used in building a wall round the cemetery. The church was twenty two feet six inches in width; and it measured about 60 feet in length, so far as could be calculated by the writer. At the western gable, on the inside, there was an apartment, with a coved stone roof, extending the whole breadth of this edifice. Mortar still remaining on the roof shows, that it had been built over wicker-work. However, it is now greatly injured, owing to an act of Vandalism which the people of that neighbourhood allowed to be perpetrated over twenty years ago. A pious person having bequeathed a small sum of money to have a wall erected round the exposed graveyard, a stonemason contracted for its erection, and he at once proceeded to pull down the old church walls—then tolerably perfect —so that their materials were used for his purpose. Excepting the coved-roof chamber or cell, nearly every other part of the church has been removed, and even a considerable portion of that has been destroyed, as we were assured on the spot by a guide, who was cognizant of the facts we have already related. The east gable has been pulled down to within a few feet of the soil on the outside; interiorly, it supports one side of the coved-roof. A small fragment of the north side wall stands. The fine limestone of the district had been used in constructing the entire building. Immediately south of the churchyard, there is a very remarkable moat, which like so many of its class in Ireland appears to to have been in great part the work of human hands. Advantage had been taken of a natural eminence, to scarp it into an artificial and a symmetrical shape, probably to place a fortification on the upper surface. About a quarter of a mile to the same side of it, Lady Well is seen, towards the east by south of this church. It was dedicated to the Blessed Virgin, and it used to be frequented, on the 8th of September, one of her festivals. On an eminence near the old church stands a castle in ruins, which tradition says had been built by O'Molloy, to whom also the erection of the church is ascribed. 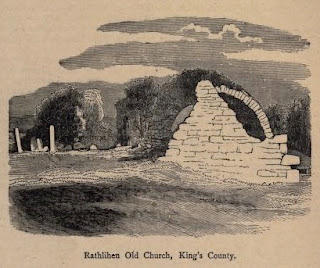 The memory of the Patron Saint Illadan was held in great veneration, at Rathlibhthen church, for many centuries after his death, and even until the time of Colgan; who tells us, that the statue of St. Illand, with a mitre on its head, and a crozier in hand, was to be seen there in his day. This image, however, shared the fate of many other venerable remains of Christian art, it having been broken by modern sectaries, before the middle of the seventeenth century. The saint's statue, with an episcopal mitre on its head and a crozier in its hand, long remained in this church, and it was to be seen there towards the close of the last century, but the head had been broken off by sacrilegious hands. In 1838, Thomas O'Conor could obtain no information about the statue of St. Iolladhan, and as may supposed still less can any tradition about it be recovered at the present time. The year of this saint's death is not known; but, his festival was kept, on the 10th day of June, probably that of his death. We find a feast set down, in the Martyrology of Tallagh, at the 10th of June, in honour of Illadan mac Eucdoch o Raith Liphiten. We are told, moreover, that Marianus O'Gorman and a commentator on St. Aengus have the festival of Illand Hua Eochaidh, on the same day. The Martyrology of Donegal records him, at the same date, under the title of lolladhan son of Eochaidh. Under the head of Rath-Libhthen, Duald Mac Firbis enters Iolladan, descendant—rather should he be styled son—of Eochaidh, and a bishop, at June 10th. His festival is entered in that copy of the Irish Calendar compiled for use of the Irish Ordnance Survey, at the iv. of the June Ides, or 10th of this month.