June 17 is the feastday of one of the most important saints of Kerry, Moling Luachra. Saint Moling, whose original name was Daircell, is linked to such legendary figures as Gobban Saor, the smith, and Suibhne Geilt, the madman of the forests, as well as to other Irish saints such as Brendan the Navigator. Below is a summary of his life written by 19th-century Irish Anglican clergyman, the Rev. Thomas Olden: 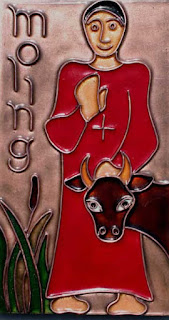 DAIRCELL or TAIRCELL, otherwise MOLLING (d. 696) (Annals of Four Masters), was the son of Faelan, a descendant of Cathaeir Mor, who was king of Leinster and monarch of Ireland A.D. 358. In the Latin life published by the Bollandists few particulars are given, but the Irish life in the royal library of Brussels has the following account of his parentage.

Faelan was a brugaidh, or farmer, at Luachair, now Slieve Lougher, a wild upland district near Castle Island in Kerry. Having accumulated considerable wealth, he returned to his native territory, Hy Degha, situated on the river Barrow. His wife, Eamnat of Ciarraighe (Kerry), had a beautiful sister with whom Faelan fell in love. After some time, finding she was about to become a mother, she fled by night from her sister's house to her native place. Here, on the bleak upland of Lougher, she encountered a snowstorm, and worn out and exhausted gave birth to a child. She was tempted to strangle the babe, when a dove sent from heaven flapped its wings in the mother's face, and prevented her from accomplishing her purpose. Meanwhile St. Brendan of Clonfert, whose church was not far off, hearing of the occurrence, had the mother and child brought to him. He placed the child in charge of one of his clergy, who baptised him, and gave him the name of Taircell (gathering), in allusion to the manner in which the dove ' gathered' him to her with her wings.

After some years he asked and received permission to go forth and collect alms for the maintenance of the students, and also for the carrying on of divine service. One day when returning from visiting Lougher for this purpose he was stopped by a strange robber band, described in the story as 'people in the guise of spectres.' They threatened to rob and kill him. He asked to be allowed to try and escape by his swiftness. 'Let his request be granted' said the hag, 'for swift as the wild deer are we, and swift as the wind is our dog.' Taircell then made three springs, in which he passed over the whole of Lougher, landing in the third on the enclosure of the church. 'Henceforth', said his tutor to him, 'you shall be called Moiling of Lougher from the leaps (linge) you have made'.

He now learnt something of his parentage from his mother, after which his tutor ' cut his hair and put the tonsure of a monk on him,' and desired him to go to St. Maedoc of Ferns. At this time Molling is described as a well-favoured youth:'whiter than snow was his body, ruddier than the flame the sheen of his cheek.' He first visited St. Modimoc at Cluain Cain (Clonkeen, co. Tipperary) ; here he entered into a covenant with the community ; passing on to Cashel the king promised him a site for a redes, or abbey church, but in the night an angel reproached him for having asked for it when a place was already his at that point on the Barrow where St. Brendan thirty years before had made a hearth, and the fire was still kept burning;from this he proceeded to Sruthair Guaire (Shrule in the Queen's County), and thence southward till he beheld a watch of angels over the point of Ross Broc, above the river Barrow. Reaching the place he found St. Brendan's hearth, and there he founded his house and church, and it was thenceforward known as Tech Molling, or St. Mullens. It was his permanent dwelling. It is indeed stated in one of his lives that he spent part of his time at Glendalough, but this appears to be an error arising from the fact that there was another Daircell, a contemporary, who was bishop of Glendalough.

Some time after, the great yew tree of Lethgle known as the Eo Rossa sell, and St. Molaise divided it among the saints of Ireland, and St. Molling having claimed his share sent for the famous artist Goban to construct an oratory for him of the wood, "When it was finished the price demanded was as much rye as the oratory would contain. ' Turn it up,' said Molling, 'and put its mouth upwards. So Goban laid hold of it by both post and ridge so that he turned the oratory upside down, and not a plank of it started from its place, nor did a joint of any of the boards move from the other.' Moiling then sent messengers throughout his territory telling them of the demand, but the reply was that all their country could not supply so much, and he had to perform a miracle to pay the debt.

Molling was held in the highest honour throughout Leinster. There was at this time a dispute between the Leinster people and the joint kings of Ireland, Diarmuid and Blathmac, with respect to the boundary of their territories, and St. Molling's assistance being invited, it was finally arranged that he and the kings should start from their respective homes at the same time, and that their place of meeting should be the boundary. But the kings treacherously posted parties in ambush all the way from Slieve Bloom to Ath Cliath (Dublin) to intercept the saint on his journey northward. Aware of their intention, he and his attendant assumed disguises and passed them safely, with the result that the boundary line was drawn in favour of Leinster. Some years after (674) Finnachta the Hospitable succeeded to the kingdom of Ireland. He had exacted the tax called the boruma twice from the Leinstermen, but was resisted on a third occasion. He therefore prepared to levy it by force, when Bran, son of Conall, king of Leinster (d. 687), summoned the laity and clergy of Meath, and it was decided to send for St. Molling. He assembled a synod of his elders, and after a solemn invocation of the Trinity set out for the court of the king. When he arrived he advised peace, and was then urged to undertake the negotiations, the king addressing him in highly flattering language as ' the victorious star of Broc,' 'the Daniel of the Gael,' &c., and promising him a 'silken hood,' with more substantial rewards. He undertook the perilous adventure, and addressing himself to King Finnachta, asked for a respite in the collection of the boruma. ' For how long?' he was asked. 'A year,' he replied. 'We cannot grant it,' said the Ulstermen. 'Half a year, then.' 'No,' they replied. 'Well, then, till Luan '(Monday). 'It shall be given,' said the king. St. Molling then took securities for the agreement, 'binding on him the Trinity and the four gospels of the Lord.' But the word Luan was ambiguous; and meant not only Monday but the day of judgment, and Molling accordingly informed the king that the engagement he had made signified a permanent remission of the boruma, and he admitted the interpretation, adding, 'I will not break my promise.' It should be mentioned that another account attributes the remission to Molling's terrifying the collectors by threats of vengeance. In consequence of the remission of the boruma Finnachta is reckoned a saint in the ' Martyrology of Donegal'(14 Nov.), where the hospitable or festive king looks rather out of place.

In the time of Giraldus Cambrensis Molling was reckoned one of the four prophets of the Irish race, and the prophecy or rhapsody called the ' Baile Molling' is attributed to him, but, according to O'Curry, it was not written until about 1137. It would appear, however, that the ground for this title was rather his knowledge of character,'such was the grace of prophecy in him that if asked he could tell people's characters, how they should live, the manner of their death, and their future deserts.'

He was also known as a poet, and more poems are attributed to him than to any other Irish saint except St. Columba. A very curious one has been published by Mr. Whitley Stokes from the 'Book of Leinster,' and as it is quoted in a manuscript of the ninth century, little more than a century after his death, it is probably authentic. It is a dialogue between the saint and the devil, and treats of the happiness of the Christian and the misery of the wicked. The statement that Molling was made 'archbishop of Leinster ' by King Bran in 632 and placed in the chair of St. Maedoc of Ferns gives Colgan and Lanigan much trouble, but the story is evidently a late invention, as the king died in 601, and the 'Life of St. Brigid,' by Cogitosus, on which Colgan founds an argument, belongs not to the seventh century, as he supposed, but to the ninth.

A book named ' The Yellow Book of Molling' is lost, but a Latin manuscript of the four gospels, attributed to him, is preserved in Trinity College, Dublin.

The high Christian character and gentleness of the saint are ascribed by his biographers to his having been born on 'the day on which the Holy Ghost descended on the apostles.' How considerate he was is shown by the story of the leper. One day when he was preparing for the holy communion, a man, hideously deformed by leprosy, approached and asked to be allowed to partake of the chalice. Hesitating for a moment, he immediately called to mind the passage, 'I will have mercy and not sacrifice,' and permitted him to partake of it ; the story adds that the Lord supplied the saint with another chalice. Molling died on 17 June, in the eighty-second year of his age. The Dublin copy of the Annals of Tigernach states that he died in Britain. The year seems certainly to be 696.

The picture is of an enamel produced by craftswoman, Anne Murphy.