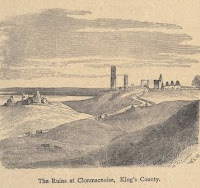 June 13 is the commemoration of Saint Mac Nissi, a sixth-century abbot of Clonmacnoise.  He shares his name with the episcopal patron of the northern diocese of Connor whose feast is celebrated on September 3. Today's saint is noted in the Martyrology of Oengus in the following quatrain, translated by Whitley Stokes:

With Bartholomew the active
thou art weak if thou hear not
from us to the Kings (of heaven)
went Mac Nissi the chaste of Cluain.

Canon O'Hanlon brings this account of the saintly abbot of Clonmacnoise in volume VI of his Lives of the Irish Saints:

This holy man is mentioned, by St. Aengus the Culdee, as deserving of religious veneration from an early date. Among the Burgundian Library Manuscripts, at Bruxelles, there is a Latin Life of Moenissus. Whether he was the present saint, or the Mac Nissi, Bishop of Connor, venerated at the 3rd of September, the short account given by Mr. S. Bindon does not enable us to determine. In the Feilire of Aengus, Mac Nissi the chaste of Cluain is commemorated, on the 13th of June. We also find the name of Mac Nesi, Abbot of Cluana mic nois, occurring in the Martyrology of Tallagh, and in that of Marianus O'Gorman, as having had a festival, at the 13th of June. Nearly contemporaneously with the death of St. Ita, of Killeedy, the predecessor of Mac Nissi, and who is called the abbot Aeneas, departed this life. St. Macnessius immediately succeeded him, in the government of Clonmacnoise, at a time when this sanctuary of holiness; on the banks of the Shannon, was in the zenith of its splendour, as a house and home of retreat. He ruled from about A.D. 574, for a period of sixteen years, according to a gloss on Marianus O'Gorman. The account of his being abbot, during the lifetime of Eneas, must be taken to signify, either that he was elected at this abbot's express wish, when on his death-bed, according to a custom of the time; or that the term abbot, said to have been applied to him by St. Ita, was rather an expression used by the author of her Life, and referable to Macnessius, at a future period. The O'Clerys place this saint's death, at A.D. 590. The Martyrology of Donegal records him as Mac Nessi, Abbot of Cluain-mic-nois.