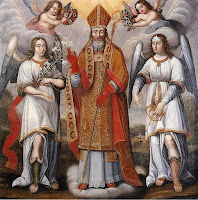 June 19th is the commemoration of a 6th/7th century bishop of Nevers, Deodatus (Saint Dié). The evidence that this saint was an Irishman is at best sketchy, but as a disciple of the Irish missionaries Argobast (Arbogast) and Floratius (Florentius), I am pleased to reproduce Canon O'Hanlon's account of his life. I found the latter two saints most interesting, they seem to have brought a devotion to Saint Brigid of Kildare with them to continental Europe as the church of Saint Thomas, associated with the pair, had an altar dedicated to Ireland's patroness. Whether or not he was a countryman, Deodatus of Nevers was one of their fellow-strugglers in the ascetical life before he too was called to the episcopate.

We know not, on what sufficient authority this holy prelate has been classed among the Irish Saints, except it arose from his having been a disciple and companion of St. Argobast and of St. Floratius. At this date, Colgan had intended to publish a Life of St. Deodatus, as we find from the posthumous list of his writings. This is probably the saint, elsewhere called Adeodatus, or Theodatus, bishop of Nevers, and thought to have been an Irishman by birth. This, too, is stated, by Father Stephen White. A Life of the present holy man was composed by a monk of St. Dié, in the ninth or tenth century. This was afterwards amplified by an Abbot of Mayenne, in the eleventh century. This Life was approved of by Pope Leo IX., in the year 1049. Surins has published his Acts, at the 19th of June. These are said to have become vitiated in some passages, through the carelessness of copyists. The Bollandists have published the old Life of St. Deodatus, at the same date; and this is supposed to have been written from collections, made by the holy man's own disciples, by a learned and pious man, who had been inspired to compose the memoir of such a distinguished patron. Different copies of this biography have come down to our times. Before his death, Father Godefrid Henschenn had prepared this Life for publication, and Father Daniel Papebroke afterwards edited it for the press. A previous commentary accompanies it, and several notes are appended. This Life had been previously edited at Nancy, in the year 1619, and it was afterwards translated into French, by Jean Ruyr or Ruer, in 1624, and printed at Trecis. The Petits Bollandistes have a Life of this holy man, whom they designate as St. Dié, Didier, Deodat, Adeodat, or Dieudonne, Bishop of Nevers. There are notices of St. Deodatus by Rev. Alban Butler, and by Rev. S. Baring-Gould.

When he grew very old and feeble, St. Deodatus left his Abbey and retired to a little cell, which was near a chapel he had built and had dedicated to St. Martin. Thence he continued to govern his religious with as much care and devotion, as if he had been living among them. At length, having attained nearly the ninetieth year of his age, a mortal illness fell upon St. Deodatus, and his friend St. Hildulph had a heavenly admonition, that the end was drawing near. He was visited in his cell by St. Hildulph during his last illness. From him, Deodatus received the last Sacraments, and by him were his eyes closed in death. During this illness, he recommended the care of his disciples to St. Hildulph, who charged himself with such a duty, and it gave great consolation to the dying saint. The death of this holy man is said to have taken place on the 19th of June, in 679. In a Manuscript Florarius, the date for his Deposition is set down at the 2nd of January. Afterwards, his monks carried the sacred remains to the Church of the Holy Mother of God. They shed abundance of tears for the the loss they had experienced. St. Hildulph offered up the sacrifice of propitiation, according to the rites of the holy Catholic Church, when the body of the venerable defunct Deodatus was committed to the earth. During the year after his death, St. Hildulph often visited the monastery of Galilee, to offer Mass for the repose of his deceased friend. The monks there resumed their ordinary exercises and celebrations; and recollecting the former practices of both saints, they wished to continue the custom of bringing to St. Hildulph the tunic of St. Deodatus. When owing to his great age, St. Hildulph could no longer leave Moyen-Moutier, the tunic of St. Deodatus was brought to him in like manner. Such was his veneration for that relic, the holy Archbishop went down on his knees to kiss it, and he applied it devoutly to his weak limbs. After his death, the religious of St. Hildulph and of St Dié were accustomed to visit each other alternately in solemn procession, and carrying the tunics of their respective patrons, while their bodies had been consigned to the earth, and even while they had been encased in their proper shrines. Great miracles were wrought afterwards, at the tombs of these holy men. In 787, the monks of St. Dié brought the remains of their holy patron in the same coffin, in which they had been deposed by St. Hildulph, and placed them before the altar of the Holy Cross, in the church dedicated to St. Maurice. Not only through the Vosges Mountains, but throughout France, the veneration for St. Deodatus was extended.

At the 19th of June, the festival of St. Deodatus is commemorated in an ancient Manuscript Martyrology of the Monastery of Hilariac, in Lotharingia, and in that of Usuard, enlarged by Greven, as also, in the works of Trithemius, of Saussay, of Wion, of Dorgan, of Menard, and of Bucelin. In his Irish Kalendar, Father Henry Fitzsimon, at this date, calls him Theodatus. In his Scottish Kalendar, Camerarius refers the feast of St. Adeodatus, Bishop of Nevers, to the 23rd of March, and to the 19th of June. Thomas Dempster also records the feast of St. Adeodatus, at the latter date.

The abbey of Dié was secularized in 954, and to it a chapter of Canons was attached. In some engravings, St. Did is represented as holding a church on his hand; in others, he is represented as reaching his hand towards thunder clouds; while again, he is shown as healing a woman possessed. These pictures have reference to incidents related about this holy man. In the year 1003, Beatrix, Duchess of Lorraine, caused another Translation to take place, when the remains of St. Deodatus were put in a more convenient place, in the church of St. Maurice. When Pope St. Leo IX. Visited the Val de Galilee, in 1049, he there consecrated some altars near the tomb of St. Dié, and notably those altars of the Transept, which were built after the translation of his relics. In the year 1540, on the 1st of October, the chapter reverently opened the shrine of St. Die, and then removed three joints from one of his hands, together with a tooth from the jaw-bone. One of those joints, with the tooth, they sent to Lambert, bishop of Caserte, who was then in Rome. The other two joints were deposed in the sacristy, and in 1618, these were place in a reliquary of pure silver. In the year 1635, the Swedish army burned the shrine of St. Dié, with a portion of his relics, while the rest was miraculously saved. By a Bull of Pope Pius VI., and dated July 21st, 1777, St. Dié was erected into the seat of a bishop. During the French Revolution, the relics of Deodatus were profaned. This See was suppressed in 1801, but it was re-established in 1817. Later still, on the 19th of June 1851, Mgr. Louis-Marie Caverot transferred the sacred relics of St. Dié to a precious shrine made in a pure Catholic style of art. This is also a monument of that respectable prelate's pious liberality, and of his taste, which is manifested in the design.