Among the saints commemorated on June 1 is Cronan, Abbot of Lismore, whose repose is recorded in the early eighth century. A diocesan historian gives this summary of the history of his monastery:

The church and monastery of Lismore, which grew to be one of the renowned centres of ancient Irish learning and piety, owed its foundation to St. Mochuda of the 7th century. Mochuda, otherwise Carthage, was a native of Kerry, and he had been abbot of Rahan in Offaly. It is probable that there had been a Christian church at Lismore previous to the time of Mochuda, for in the Saint's Life there is an implied reference to such a foundation. Be this as it may, Mochuda, driven out of Rahan, with his muintir, or religious household, migrated southward, and, having crossed the Blackwater at Affane, established himself at Lismore in 630. In deference to Mochuda's place of birth the saint's successor in Lismore was, for centuries, a Kerryman. Lismore grew in time to be a great religious city, and a school of sacred sciences, to which pilgrims from all over Ireland and scholars from beyond the seas resorted. The rulers of the great establishment were all, or most of them, bishops, though they are more generally styled abbots by the Annalists. Among the number are several who are listed as Saints by the Irish Martyrologies, scil: 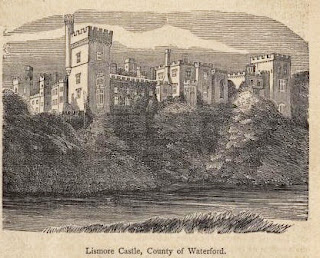 Canon O'Hanlon is unable to add much further detail but does discuss the sources:

...The death of an Abbot Ronan is entered, on the authority of the Annals of Munster, at A.D. 703. Soon after him, the present St. Cronan succeeded. The Annals of Ulster state, that he belonged to the Hi Ecain family. Nearly similar to this is the statement of Tigernach, who calls him Cronan h. Hecain. It is difficult, at present, to ascertain his race; but, under this form of name, it seems to resemble O h-Aedhagain, Anglicized sometimes O'Hegan or Egan. He is said to be of the Ua Eoan, according to the Annals of the Four Masters. We may fairly infer, however, that he was born, sometime about the middle of the seventh century. The date for his birth certainly fell sometime within that age; but, the exact year has not been ascertained. It seems probable enough, that his early education had not been neglected, and that he had been trained to a religious life in Lismore; for, it was usual to single out some domesticated monk, to succeed as Abbot, in that house where he had been living. On this day, the Martyrology of Tallagh has an entry, regarding St. Cronan of Lismore; but, furthermore, it seems to furnish little to elucidate his history....The Martyrology of Donegal registers the name of Cronán, Abbot of Lismor Mochuda, at the 1st of June. However, in the great Collection of Saints, by the Bollandists, at this day, we find no mention of St. Cronan made.

The silence of our Annals, on the subject of those pious inmates of the religious establishments erected at Lismore, from the death of Abbot Ronan, until the obituary record of St. Cronan Hua Ecain, appears to favour a belief, that from at least twelve to fourteen years, the latter holy personage had been superior over the large community, which had been there congregated, during the period of his rule. About the beginning of the eighth century, likewise, the schools of Lismore were in the zenith of their reputation...

The Irish Annals of the Four Masters assign his death, to the 1st day of June, A.D. 716; but, the Annals of Ulster record his decease, under the following year. The death of Cronan n-Hecain, Abbot of Lismore, is entered at A.D. 718, in the Annals of Tighernach...The present holy man lived, at a glorious period in the history of our Irish Church.