June 9 is the feast day of Saint Colum Cille (Columba) of Iona. The entry in the Martyrology of Donegal reads:

COLUM CILLE, son of Felim, Abbot of Black Monks, at Doire Choluim Chille and at I, in Albain. Crimhthann was his first name; and he was called Colum from his similarity to the bird which is called the dove, from his mildness and gentleness. The reason that he is named Of the cill [or church] is, because he was fostered at Cill-mic-Nenain, in Cinel Conail, in his own patrimonial land. On the seventh day of the month of December he was born at Gartan, in Cinel Conaill aforesaid, A.D. 520. 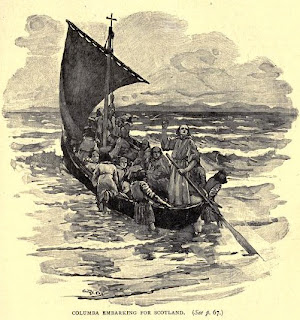 He spent two score and two years of his life in Erin disseminating religion, piety, and good deeds ; in preaching and teaching the word of God ; healing every disease and every distemper (as is evident from the book which contains his life); founding many monasteries and churches throughout Erin, as at Doire, Rathboth, Senglenn, Torach, Cill-mic-Nenain, Druim Tuama, Gartan, Tulach-Dubhghlaisi, Baile Meg-Robhartaigh, in Cinel Conaill; and at Druim-cliabh in Cairbre Droma-cliabh, and Serin in Connacht; Serin in Meath, Cenannas, Dermagh, Surd, Maein, and many other churches throughout Erin. He afterwards went to Albain on a pilgrimage, and dwelt on the island which is called I Coluim Cille, and this place was offered to him, and many other churches. And he did more service in Albain for the love of the Lord than in Erin, though he did much good there also; for it was he that brought them from the darkness of paganism and of sin to the light of faith and good deeds. And he spent thirty-four years of his life in that country serving God, until he went to Heaven on Sunday night exactly, after completing his seventy-sixth year. His body was brought to Erin after his death, so that it was buried with honour and great veneration in one tomb with Saint Patrick and with Saint Brighit, at Dun-da-lethghlas in Ulster. For these are the three chief patrons of Erin : Patrick, Colum Cille, and Brighit. And Colum Cille was of the noble races of Erin, i.e.,his father was of the race of Conall Gulban, son of Niall of the Nine Hostages. Eithne, daughter of Dioma, son of Noe, of Leinster, of the race of Cathaoir Mor, king of Erin, was his mother ; and what some people say, that his mother was the daughter of Mac Consnamha, is not true, for there were several hundred years from the birth of Colum Cille to the time that O Ruairc had his name, from whom Mac Consnamha is descended.

Cuimin, of Condeire, says, in the poem beginning “Patrick of the fort of Macha loves”, that Colum Cille used not to take of food during the week as much as would satisfy a poor man for one meal. Thus he says :-

“The holy Colum Cille loves :
Son of Feidhlimidh, of generous deeds,
There went not for a week into his body
What would satisfy a poor man one turn.”

“Three years was he without light,
Colum in his Duibh-regles.
He went with angels out of his earthly prison
After six years and seventy.”

A very ancient old-vellum-book, in which is found the Martyrology of Tamhlacht-Maoilruain and the Irish saints of the same name, states, that Colum Cille was like unto Andrew the Apostle in his habits and life.

The Life of Ciaran, of Cluain, chap. 47, states that the Order of Colum Cille was one of the eight orders that were in Erin.

Note: Further resources on Saint Colum Cille can be found at my other site Trias Thaumaturga.