June 20 is the commemoration of a Saint Faolan, whose name is also rendered in the nineteenth-century sources as Fillan, Faelan, Foilan and Felan. This saint is linked to both Ireland and Scotland, but is accepted as a distinct individual from the more famous Saint Fillan, son of Saint Kentigerna, who is commemorated on January 9, two days after the feastday of his mother. The Faolan of June 20 is also described in the Martyrology of Tallaght as Faelan amlabair, Faolan, the mute. The gloss on the Martyrology of Oengus describes him as:

As the saint is also associated with a church site named after him, Cill Fhaelain, anglicized as Kilwhelan, this provides Canon O'Hanlon with an opportunity to write about a place he knows well, his own beloved 'Queen's County' of Offaly:

St. Faolan, of Rath Erann, in Scotland, and of Cill Fhaelain, in Leix, Queen's County.

At the 9th day of January, we have already treated about a distinguished St. Foilan, Felan, or Fillan, who was an Abbot in Scotland, and a native of Ireland. He is said to have been baptized,by a holy Bishop named Ibar. Now, such a bishop seems to have lived in Leix, at an early period. It is related of that St. Foilan, how it was prophesied, he should be born with a stone in his mouth. Moreover, he was a leper. Wherefore, a suspicion has been suggested rather than approved, that such concurring circumstances might possibly identify him with the St. Faolan of Rath-Erran, in Alba, and of Cill-Fhaelan, in Leix. The latter holy man was venerated on this day. A festival is set down, at the 20th of June, in the Martyrology of Tallagh, and in honour of Faelan amlabair, in StraithEret, in Albain. From a very early period, in the Irish Church, the feast ofthis latter holy man had been kept, as we find it set down in the "Feilire" of St. Aengus, who mentions him with eulogy, as being a "splendid mute." The commentator adds, that he was the son of Oengus, son of Natfraech. He is commemorated, also, by Marianus O'Gorman and by Charles Maguire, at this date. He is designated, moreover, as “Leprosus"—meaning that he was a leper—and it is stated, that he belonged to Laigisia—Leix—a region in Ireland, and that he was of Rath-Eerionn, in Albania. The Bollandists have a notice of this saint, at the present day.

In the old Life of St. Attracta, there is a legend related, about how she saved the people of Lugna from the wrath and violence of the King of Connaught, his chiefs, and people, by opening a passage for them through Lough Techet. Only one holy man named Foelan, the servant of a harper, was drowned; and owing to the entreaties of his master, St. Attracta prayed for his release from death. An Angel directed her, to go to the place where he lay; and, obeying this order, she found the body as if laid out in sleep. On touching him, Faelan arose as if from an ecstasy. It seems to be inferred, that this present saint was thus restored to life, after he had been drowned. He must have flourished at a very early period, if the identity be established; but, there seems to be no bond of historic connexion to trace it, either as to time or place, while the whole statement is of an extravagant and legendary character. We are further informed, that Faolan was descended from the race of Aenghus, son to Nadfraech, who is supposed to have been the celebrated King of Munster, bearing that name. If this be so, Faolan most likely was a native of that province, and his birth should be referred to the fifth century. However, there are no safegrounds on which to establish a correct conclusion. It is probable, when he resolved on a place for religious seclusion, a vast wood and a wilderness surrounded that elevated spot he selected for a habitation. There, he probably built a cell, and lived in it for some time. His name, moreover, was ever afterwards associated with the locality, and the spot where his church stood was frequented by devout worshippers, so late as the reign of Queen Elizabeth. 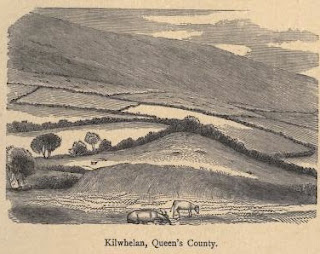 Although Archdall asserts, that the place was unknown, such is not the case; for, Kilwhelan was situated on one of the western slopes of the Cullinagh Mountains, in the Queen's County. The name is still locally preserved. It lay also within the ancient territory of Leix. It is remarkable, that an old disused burial-ground may yet be seen in this townland; while tradition avers, that an old church formerly marked the site, with even greater prominence. The writer has often visited this spot, in early youth, and long before he had acquired a knowledge of its having had a former historic celebrity. At that time, the mound of human remains was a much more prominent object over the surface of an open field, than it now is; cattle have since trampled it down, in its exposed and neglected situation. However, at no time within the present century has there been even a head-stone to mark the site of a grave; but, the peasantry relate, that when the adjoining earth had been turned—even with the plough—human remains, and also pieces of coffins, have been unearthed, which prove, that formerly it was much used as a place for interment.

We find the present saint recorded, in the Martyrology of Donegal, at the same date, as Faolan, the Stammerer, of Rath Eronn, in Albain, and of Cill Fhaolain, in Laoighis, of Leinster.