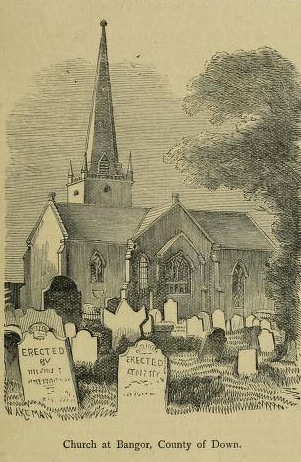 On August 22  we commemorate an Abbot of Bangor, Beoghna, whose repose is recorded in the Irish annals in the early seventh century. The Annals allow us to reconstruct the list of succession of the abbots of Bangor, and they place Beoghna as the immediate successor to this County Down monastery's founder, the great Saint Comgall. This is further borne out by a hymn entitled "Commemoration of our Abbots" in the Bangor Antiphonary which lauds the first fifteen of Bangor's abbots, and here the name of Beogna immediately follows that of Saint Comgall:

The holy, valiant deeds
Of sacred Fathers,
Based on the matchless
Church of Benchor;
The noble deeds of abbots
Their number, times, and names,
Of never-ending lustre,
Hear, brothers; great their deserts,
Whom the Lord hath gathered
To the mansions of his heavenly kingdom.
Christ loved Comgill,
Well too did he, the Lord;
He held Beogna dear;

The evidence from the Annals, however, suggests that our saint did not enjoy a long rule as Saint Comgall's successor, as Canon O'Hanlon explains:

St. Beoghna, Abbot of Bangor, County of Down.
[Sixth and Seventh Centuries.]

Doubtless where he had so long, as student, priest, and high official, discharged his duties with honour to himself and with benefit to all who came within the sphere of his influence, the memory of this holy abbot must have been held in benediction. In a misplaced manner, the published Martyrology of Tallagh enters this saint, as Beogaes, Abb. Bennchoir. Another entry is evidently allowed to intervene, between the first and the last of these denominations. In that copy contained in the Book of Leinster, his name and that of his father are given. The name of the latter, according to that record was Daigre. His record and feast are set down by Marianus O'Gorman, at the 22nd of August. The present holy man was born, probably in the early half of the sixth century. It seems quite likely, that his religious profession must have been made under St. Comgall, the first founder of Bangor, and who was called away from this life, on the 10th of May, A.D. 601. Soon after his decease, it would appear, that St. Beoghna was elected to succeed him. However, he did not long survive his illustrious predecessor. The age of Christ, when the holy man resigned his spirit to heaven, was 605, according to the Annals of the Four Masters. At this date of August 22nd, in the Martyrology of Donegal, we likewise find a festival recorded, in honour of Beoghna, Abbot of Bennchor, after Comhgall. In that carefully compiled Calendar, referring to the Diocese of Down, Connor, and Dromore, his feast has been registered for this day.