August 3 brings the commemoration of some interesting early Irish female saints. Last year I looked at the northern Saint Trea of Ardtrea and this year we can journey to the western county of Mayo for the commemoration of Saint Deirbhile (Derbile, Dairbhile, Derbilia, Derbhiledh). I was pleased to see that there are a number of online local history sites which illustrate a continuing interest in popular devotion to this holy woman. You can see a stained-glass window depicting the story of Saint Deirbhile at the Heritage Centre which bears her name here and a photograph of the ruins of the pre-Norman church here. There are also a couple of videos on youtube showing both the church ruins and Saint Deirbhile's Well. I noted that like Saint Brigid, Deirbhile too received the attentions of an unwanted suitor and plucked out her eyes to discourage him. The water from her holy well is thus particularly associated with the healing of the eyes. Unlike Saint Brigid, Deirbhile has not left a written Vita, but like Saint Bronagh of Kilbroney her memory is still very much alive in the locality where she once flourished. In his account, however, Canon O'Hanlon does not allude to the popular traditions surrounding our saint but concentrates on her genealogy and the possibility that she was present at the Synod of Easdara convened by Saint Columba in the year 585:

It is mentioned in the Martyrology of Marianus O'Gorman, as likewise by the Commentator on Aengus, that the feast of a St. Derbile occurs on the 3rd of August. According to the Genealogies of the Irish Saints, Derbhilia was the daughter of Cormac, son to Breech, son of Eochad, son to David, son of Fiach, ancestor of the Hua Fiachrach. St. Derbilia seems to have flourished in the sixth century, and she lived a religious life, in Erris, a remote part of the County of Mayo. She was contemporaneous with the great St. Columkille; for, by allowing the usual number of thirty years to a generation, and taking her as the fourth in descent from King Dathi, she must have flourished about that period. She belonged, also, to the Second Class of Irish Saints. She appears to have sought out one of the most remote parts of Ireland for the site of her retreat; while she is supposed to have erected an oratory, within that double peninsula off the extreme north-west coast of the County of Mayo, and where connected by an isthmus with the mainland the town of Belmullet stands. This peninsula, known as the Mullet, extends from Erris Head on the north, to the entrance of Blacksod Bay on the south; it being washed on the west and north by the Atlantic Ocean, on the east by Broad Haven and Blacksod Bay, and on the south by the entrance to Blacksod Bay and the Sound of Achill. It is a region rarely visited by the tourist or general traveller. There, it is supposed St. Dairbhile established herself, about the middle of the sixth century; and, tradition has it, that she founded there a religious institution. Her antique church is yet to be seen within the Mullet, a district little explored, and in the extensive barony of Erris. It is remarkable for the Cyclopean character of its masonry; and it is of an oblong shape, about forty feet in length, by sixteen in breadth. It is lighted on the east end by a small, unadorned, and semicircular-headed window, splaying considerably on the inside. The walls are constructed wholly of gneiss or stratified granite, while they are two feet and seven inches in thickness. A doorway in the western wall measures about four feet ten inches in height; while it is only two feet in width, at the spring of the arch, and two feet four inches at the base. The lintel or arch-stone, now greatly time-worn, has a rude architrave in low relief, on either face. A very beautiful illustration of the circular-headed doorway of this church may be seen, in the celebrated work of Dr. Petrie. Interlaced tracery is to be found on one of the stones, within the doorway, but at present it is greatly worn. 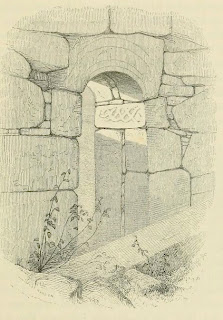 After the famous convention at Drumceat had been over, St. Columba travelled southwards, and at Easdara, now Ballysadare, he convened a synod, in 585, to which many of the Irish saints were drawn, as well from a sense of religious obligation, as to pay their respects to the great Apostle of the Picts and Scots. To this we have already alluded, in the notices given of St. Farannan; and, it seems to have been an event of great historic and ecclesiastical importance, at that time, when it had been convened. Ballysadare, or the Town of the Waterfall of the Oak, takes its name from the waterfall, or rather the series of waterfalls, over which the River Uncion discharges its waters into the sea, southwards from the town of Sligo. Before the rise of Ballysadare, the spot on which it stood was called simply Easdara, or the Cataract of the Oak, without the prefix Bal, meaning a town. There, a great number of bishops, abbots, priests and religious assembled, together with a vast concourse of lay persons. The names of many distinguished visitors have been recorded. Colgan seems to identify this saint with the Derbilia of Irras, who assisted at that great synod held at Easdra, towards the close of the sixth century. When she departed this life has not been ascertained, but it was probably towards the close of the sixth or the beginning of the seventh century. She seems to have died in the house of her foundation, and within the Mullet. In the cemetery attached to it, she was interred. We read in the Martyrology of Donegal that veneration was given at the 3rd of August to Derbhiledh, who sprung from the race of Fiachra, son of Eochaidh Muighmedhoin. According.to some, the present saint is not different from a St. Darbile, who is venerated on the 26th of October, and if such be the case, she had a double festival.