August 17 is the feast of Saint Ernan, patron of Tory Island, County Donegal. As is so often the case, we have very little information on the actual life of the saint, so in his account below Canon O'Hanlon describes Saint Ernan's island home and the peculiarities of its local customs. He mentions the researches of a contemporary antiquarian, Edmund Getty, for a direct link to his paper on Tory in the Ulster Journal of Archaeology, click here. Saint Ernan shares his name with at least two dozen others and so it is possible that he may also appear in some other sources, although not specifically identified.  One source which does name Saint Ernan is the sixteenth-century vernacular Life of Saint Colum Cille by Manus O'Donnell. Section 111 describes a visit to Tory Island by the great Donegal saint and concludes with the appointment of Ernan as his successor: 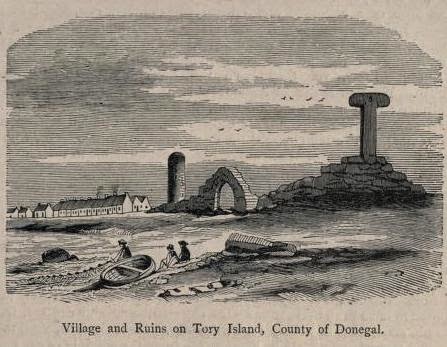 A festival to honour Ernan is inserted in the Martyrology of Tallagh, at the 17th of August. He is called the son of Colman, in the Sanctilogium Genealogicum. According to the O'Clerys, he sprung from the race of Eoghan, son to Niall. From Eoghan he was the fifth in regular descent. He was born, most probably, in the beginning of the sixth century, and in the northern part of Ireland. He became a disciple of St. Columkille. Isolated, as Tory lies out in the ocean, it seems to have a history, and dating from a remote period. In the beginning of the sixth century, it was occupied by the pagans, and it belonged to a chief, named Alild. This Island is in the parish of Tullaghobegly, and barony of Kilmacrenan, being about nine miles from the nearest part of the Donegal coast. On the way, a vessel passes three smaller islands, named Innisbofinn, Innisdooey—on which there is a cemetery—and Innisbeg. There are two villages on the Island ofTory; one called the East Town, and the other the West Town. This latter is the principal one, containing the Round Tower and the Ecclesiastical ruins. Steep rocks line the shores of this remote Island, which at certain times is inaccessible from the mainland; and a yacht or boat can only touch in a small cove, romantically situated and sheltered by cliffs, at a place called Port-Doon, from its proximity to an ancient Dun or stronghold. The Island of Tory is of very irregular shape; it is about three miles in length by one mile in breadth, in its widest part; its superficial contents being about 1,200 acres, of which 200 may be considered arable or pasture land. The soil is generally held by the inhabitants on the old "rundale" tenure; each tenant having a portion of every kind of land, but no one a permanent possession of any separate part. This almost inaccessible spot is one of the earliest places mentioned in the bardic history of Ireland, and it is the first referred to as being a stronghold of the Fomorian or African pirates, who made descents on the coasts of Ireland at a period so remote, that now it seems impossible to bring chronology to bear on it. In the accounts of those pirates, it is called Torinis, or "Island of the Tower;" in other tracts, it is Torach, or the "Towery;" while the inhabitants of the adjoining coasts of Donegal think it has derived this name from the tower-like cliffs, by which it is guarded on every side. This seems to be the correct explanation of the latter name ; for there are many lofty, isolated rocks on the opposite coast, and called by the natives tors or "towers." A remarkably lofty one on the east side of this Island itself is called Tormor, or " the Great Tower." The Nemedians are also mentioned in connection with this Island, by the ancient bards and chroniclers. As we have already seen, St. Columba founded a church on Tory or Torry Island ; off the north-western coast of Donegal, about the middle of the sixth century. According to some accounts, he also founded a religious house beside it. Whether St. Ernan accompanied his master to this Island, in the first instance, does not appear ; but, he was selected to plant Christianity there, and afterwards he was recognised as the local patron. He was the first Abbot over the monastic establishment, on the Island of Tory or Torry.

Beside the village of thatched cottages are the Round Tower and a ruined church. Of these, with other antiquities, the fullest description, and with admirable illustrations, have been given by Edmund Getty, M.R.I.A. Only the fragments of two very small churches were found there by Mr. Hills. After a careful examination of the Irish churches, this writer did not find except, perhaps, in one instance, the remains of seven churches only, in any one of eight particular places which had been visited by him. He therefore concludes, that the name "Seven Churches," had no foundation in fact, and that its acceptance was only a fallacious popular opinion. The name of this saint is already recorded, in the Martyrology of Donegal, at the date, August 17th, as Ernan, of Torach. The historic memoranda of this very interesting Island is well set forth in the "Ulster Journal of Archaeology, by a gentleman of acknowledged antiquarian research.