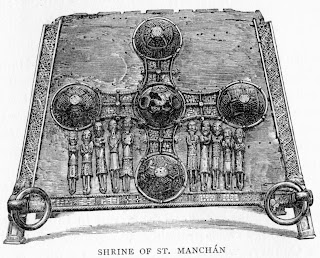 At January 24 the Irish calendars commemorate Saint Manchan of Lemanaghan, County Offaly. Devotion to this seventh-century saint is kept very much alive by the existence of a wonderful tent-shaped shrine, which, unusually, is not an exhibit in the National Museum but rather a living part of parish life in a church in Boher. The Shrine of Saint Manchan seems to have led a rather exciting life of its own in the nineteenth century, travelling to exhibitions at home and abroad. It has continued to live dangerously in our own times as it was stolen from the church in the summer of 2012, but was thankfully recovered the next day.  Canon O'Hanlon's account of Saint Manchan's life quickly lets us know that some confusion has arisen in the past about the exact identity of this saint in relation to others of the same name:

'REGARDING this holy abbot, few biographical incidents have been preserved. Five noted saints bear the name of Manchan. The years of their respective deaths and other circumstances prove them to have been distinct individuals. Besides these five, there are additional Manchens found in the Irish Calendar, under various forms of spelling, and who, from certain notices connected, must be regarded as different persons. This fact, their recorded diversity of race, family, place, and festival, seems sufficiently to establish. St. Oengus, the Culdee, enumerates eight Manchans; seven of these are distinguished by the addition to their names of various places. To this number, the names of five others, distinct, so far as localities are concerned, have been added by Colgan. This account would seem to make the number distinguished by names of places greater than what has been elsewhere set down in his text. Nevertheless, irregularities have existed in confounding the transactions of some Manchans with the acts of others, who are homonymous'.

O'Hanlon goes on to list the various saints of this name in his footnotes:

The Eight Manchans of Saint Oengus the Culdee

The Five Additional Manchans of Colgan

The Martyrology of Donegal records for this day:

MANCHAN, of Liath, son of Indagli. Mella was the name of his mother, and his two sisters were Grealla and Greillseach. There is a church called Liath-Manchain, or Leth-Manchain, in Dealbhna-Mhec-Cochlain. His relics are at the same place in a shrine, which is beautifully covered with boards on the inside, and with bronze outside them, and very beautifully carved. It was Manchan of Liath that composed the charming poem, i.e. :

“Would that, O Son of the living God!
O eternal ancient King ! &etc”

A very old vellum book, in which are found the Martyrology of Tamhlacht-Maoilruain and the saints of the same name, and an account of many of the mothers of the saints, &c., states, that Manchan of Liath, in habits and life, was like unto Hieronimus, who was very learned.

The Martyrology of Tallagh assigns the festival of St. Manchan to the 24th of January, corresponding with ix. of the Kalends of February:

The Kalendar of Drummond also calls him a most wise man, when setting down his festival at this same date:

We have no means left for ascertaining whether St. Manchan had been the first founder of a monastery at Leth, now Lemanaghan, but it seems not improbable. We read that after Cam Conaill battle, in which Diarmaid, son of Aedh Slaine, gained a victory over Guaire, a.d. 642, —or, according to other accounts, a.d. 648 —the conqueror, on returning, granted Tuaimn Eirc,' i.e., Liath-Manchain, with its sub-divisions of land, as "altar-sod" to God and to St. Kieran. The term 'altar sod' means literally 'land on the altar', i.e., church land. He also pronounced three maledictions on that king, whose people should take even a drink of water there, and ordered his burial-place to be at Clonmacnois. In consequence of this donation of Tuaim n Eirc to Clonmacnois Monastery, it seems probable, some monks of that house were established there, and that these formed a cell or dependent branch. Over these monks St. Manchan may have been their first abbot or prior.

Such an opinion appears the more probable, from the circumstance, that the death of our saint occurred at no very remote period from the foundation of his monastery. The name Liath-Manchain, now Lemanaghan, signifies "Manchan's grey land," according to Dr. O'Donovan. There is a church, called Liath-Manchain, or Leth-Manchain, in Deaibh-na-Mhec Cochlain, and here he was venerated. The old church of Lemanaghan had been situated in the middle of a bog, about the year 1615. At that time its position rendered it nearly inaccessible, although such is not the case at present. St. Manchan's well, bearing the name of Tobar-Manchain, existed in Liath-Manchan townland, in the year 1838. We are informed by Mr. O'Donovan that in the Book of Fenagh it is stated that St. Manchan had been an intimate friend of St. Caillin. Manchan is said to have been the executor of his will and his successor in the abbacy of Fenagh. Liath is compounded with the denomination of various places in Ireland, but it is easy to determine the locality of the present saint, which was Liath-Manchain, now known as Kilmanaghan, a parish, partly in the barony of Clonlonan, county of Westmeath, but chiefly in that of Kilcoursey, King's County. The old church was uprooted, and a Protestant church, now deserted, was erected on its site.St. Manchan died in 661, according to the Annals of Clonmacnoise, or in the year 664, according to the Annals of the Four Masters. He was one of many who had been carried off by that great plague, known as the Buidhe Connail. He appears to have died on the 24th of January, on which day his feast was annually celebrated in Lemanaghan. A shrine, supposed to have contained the relics of this saint, was long kept on the altar at the place of his deposition...

...It would seem, that long after the time of its founder a monastery continued at Lemanaghan. One of its abbots departed this life, after the beginning of the thirteenth century. Afterwards the monastic establishment disappeared, and it became converted into a vicarage, with a parish church. It seems to have been a dependency on the Priory of Gailinn, now Gillen, an old church giving name to a parish, in the barony of Garrycastle, and in the northern part of the King's County. The site of St. Manchan's former monastery looks desolate, and it is now little frequented by visitors.