The feast of Saint Diarmaid of Inis-Clothrann is commemorated on the Irish calendars at January 10.


The Martyrology of Donegal records:

DIARMAID, Bishop, of Inis-Clothrann, in Loch-Ribh. He is of the race of Fiachra, son of Eochaidh Muighmheadhoin. Dedi, daughter of Trena, son of Dubhthach h-Ua Lughair, was his mother, and this Dubhthach was chief poet to Laoghaire, son of Mall, who was monarch of Ireland, at the coming of Patrick into Ireland, and he showed honour and great veneration to Patrick, and believed in him, as appears from Patrick's Life, and Patrick blessed him. It was Diarmaid that composed the Cealtair Dichill in verse, in which he invoked a countless number of the apostles and saints of the world, and of the saints of Ireland, as a protection and shelter for himself, just as Colum composed the hard poem called the Luirech or Sgiathluirech of Colum-Cille, which begins: "The shield of God as a protection upon me," &c. "They shall protect me against every danger," was the beginning of what Diarmaid composed.

and the Feilire of Saint Oengus:

C. iiii. id. I pray a fervent prayer
That they go not into the bad place [hell]
Milid the chaste comely helmet
Diarmait of Inis Clothrand.

Canon O'Hanlon informs us further that:

'Diermaid of Innsi-Clothrand, without any other designation, occurs in the Martyrology of Tallagh, at the 10th of January. Also at the 10th of January, the "Kalendarium Drummondiense" notes the passage of St. Diermait, confessor, to the Lord, in Ireland. Besides, under the head of Inis Clothrann, for the 10th of January, Duald Mac Firbis enters Diarmaid, bishop, from Inis-Clothrann, in Loch Ribh, who sprung from the race of Dathy, King of Erin ; and from Dedi, daughter to Trian, son of Dubhthach ua Lughair, chief bard of Erinn'.

So, the 10th of January is well established as the feastday for this saint, even if the year of his death is not recorded. O'Hanlon believes he flourished in the sixth century and goes on to tell us first of his pedigree and then of his life:

'In various Irish calendars and records we are furnished with the pedigree of this celebrated saint. He is called in Irish, Naoimh Dhiarmuit, which signifies Diermit "the Just," or "the Holy." He is said to have been son to Lugna, and to have followed seventh in descent from Dathy, King of Ireland, who was killed about the year 427. This holy Diarmait belonged to the Hy-Fiachrach family, who inhabited a considerable part of the Connaught province. According to Oengus the Culdee, and Maguire, his mother was named Dediva, but following another account, in the Calendar of Cashel, her name was Editua,of the Kiennacht country. She is said to have been of noble race and the mother of many saints. She was a grand-daughter to Dubtach O'Lugair, arch-poet, who so courteously received St. Patrick, when he preached in the royal palace of King Leogaire at Tara. In his early youth, St. Diermit made great progress, both in learning and sanctity. After the usual course of ecclesiastical studies, having first become a monk, he was afterwards ordained priest. The duties of this office he discharged with great zeal, fervour, and fidelity. He became a spiritual director and teacher, it is said, to St. Kieran of Clonmacnoise, and he was also a friend to St. Senan, Abbot of Iniseathy. Besides the exalted opinion entertained of him by many distinguished ecclesiastics, the laity conceived a most extraordinary veneration for his character. That surname, by which he was distinguished, served to indicate the depth and sincerity of this feeling. According to Colgan, he composed a sort of metrical psaltery. In this the names of the principal holy persons are invoked, including those of fifty two Irish saints. This work was written in very ancient and very elegant metre. Some of those celebrities mentioned, however, appear to have lived after St. Diermait's time, in the opinion of Colgan. Such names he supposes to have been interpolations of a later period. The names, St. Malruan and St. Adamman alone, are instanced, as examples of additions by another and a more recent writer.

St. Diarmaid sought a retreat on Inis-Clotran Island, placed within Lough Ree, and here, surrounded by the spreading waters of the Shannon, he erected a monastery. It afterwards became famous, on account of many persons, distinguished for their learning and piety, who were found within its enclosure. After St. Diermit, there flourished and reposed at Inis Clothran, St. Senach, abbot of this place, A.D. 719, whose feast occurs on the 20th of April; St. Eochodius, abbot, A.D. 780 ; St. Curoius, abbot, and a most learned doctor, A.D. 869; Aldus O'Finn, bishop, A.D. 1136; Nehemus O'Dunin, a man of letters, a poet and an excellent historian, who died on the 17th of December, A.D. 1160. (Besides these, others are mentioned in the "Annals of Clonmacnoise" and in those of All Saints' Island. See also Dr. O' Donovan's" Annals of the Four Masters," vol. i., pp.318, 319, 386, 387, 514, 515; and vol. ii., pp. 1052, 1053, 1 136, 1 137). St. Diermit was abbot over the community here, and which he had collected around him. Whilst on this island, we may suppose, without giving much credence to fabulous accounts, regarding the manner in which their transmissions up and down the Shannon were made, that frequent interchanges of friendship took place between the holy abbots of Inis Clotran and Iniscathy.'

The abbot of Iniscathy was Saint Senan and Saint Diarmaid is indeed mentioned in the various Lives of St Senan. I found an example of the 'fabulous transmissions up and down the Shannon' between the two in the Life of St Senan from the Book of Lismore, which also features a holy woman named Brigit:

2399. Brigit, daughter of Cii Cathrach, of the Hui Maic Tail, a Virginal holy maiden, set up in a church on Cluain Infide, on the brink of the Shannon. She had a chasuble as alms for Senan, and she had no messenger, so she made a little basket of rods of holly, and she put moss to it, and placed the chasuble in it, and put her ... to ask for the Sacrifice, and then she set the basket on the Shannon, and said (to the river) : ' Thou hast leave to bear that with thee to Inis Cathaig.'

On the day, then, that the chasuble came to Inis Cathaig, Senan said to his deacon : ' If thou findest aught on the strand, thou hast leave to bring it hither.'

The deacon went and found the basket on the strand, and carries it to Senan. Senan takes out the chasuble and puts it upon him. Thereafter two stones of salt are put into the same basket, and the box containing the Sacrifice is (also) put in, and the basket is set upon the same water, and Senan said to it : ' Thou hast leave to carry this to Cluain Infide and display the box and the one piece of salt to Brigit, and thou take the other piece of salt to Inis Clothrann to Diarmait.'

When the basket reached Cluain Infide, Brigit went to it and takes thereout the box and one of the two pieces of salt. The stream of the Shannon then swept away the basket (containing the other piece of salt) and left it in Inis Clothrann with Diarmait. So after that Brigit and Diarmait gave thanks to God and to Senan.

Canon O'Hanlon also gives some examples of the continuing popular devotion to Saint Diarmaid. First, there is a curious incident recorded in a letter by John O'Donovan of Ordnance Survey fame: 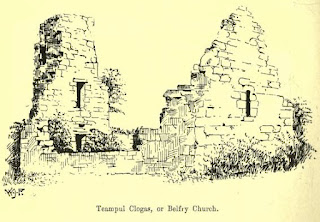 'The present situation of Inis-Clothran—now called Inchcleraun—is admirably distinguished with its antique remains on the Ordnance Survey Townland Maps for the County of Longford. The inhabitants of Cashel parish, in this district, call it the Seven Church Island," and consider it to have been the most important of those various islands on Lough Ree. The people about the shores have a very special veneration for St. Diermait, who is said to have blessed all the islands in the lake, except one, to which an Irish name is given. This signifies in English" the forgotten island." Popular traditions abound, in connexion with the ruins of a church, Templedermot, named after our saint, and the "clogas" or square belfry of Dermot, for the desecration of which, a remarkable punishment befel the Quaker who resided on Inchcleraun. The boatman, who rowed Mr. O'Donovan over to this island, declared, that about six weeks previously he and two others saw plainly and distinctly in the noon-day, a tall and stately figure walk along the waves from Inchcleraun with a measured step, until this apparition disappeared in the dim distance, near Athlone. The boatman and his companions believed the phantom to be St. Diermait, or some other early saint, connected with the island, and who had come to visit his old habitation on earth. (See John O'Donovan's letter, dated Longford. May 22nd, 1837. "Letters and Extracts Containing Information Relative to the Antiquities of the County of Longford, collected during the progress of the Ordnance Survey in 1837," pp. 54, 56.)'

The impious Quaker was not the only person to have fallen foul of our saint. A note appended to the Table of Saints in the Martyrology of Donegal records beside the name of Saint Diarmaid:

On Loch Ribh in Cuircne, and no woman or young female child can touch his Relig (sepulchral church). And a Saxon heretic woman, who violated it, cried out and died immediately. Inis Diarmada is the name of the island, with many Religs and monasteries.

O'Hanlon points to a second incident involving Saxon heretics and the holy things of Saint Diarmaid:

A beautiful ivory statue of St. Diermit, for a long time, had been preserved on the island. In order to save it from the Vandalism of Protestant Reformers, it was buried in the earth. Afterwards, it was removed, by the brother of a regular priest. He wrote an account concerning this discovery to the Irish hagiologist, Father John Colgan. The name of this person has not been given, lest, as Colgan asserts, the Iconoclasts might be enabled to discover St. Diermit's image, and subject it to their usual process of destruction. (See Colgan's ''Acta Sanctorum Hiberniae," X. Januarii. Vita S. Diermitii, cap. vi and n. 18, p. 52. ) It may be asked, is this curious and artistic relic of olden times yet in existence ?

That would indeed be interesting to know.