Today we commemorate Saint Briga who is a namesake of Saint Brigid and may possibly be one of her contemporaries. Canon O'Hanlon admits that the evidence for both the exact feast day of this saint and for her identity are rather shaky and his account only serves to illustrate some of the difficulties involved in researching the lives of the Irish saints. The attribution of January 21 as the feast day of Saint Briga of Kilbride is made in the twelfth-century Calendar of Cashel, a source which was available to the seventeenth-century hagiologist, Father John Colgan, but which is now lost: 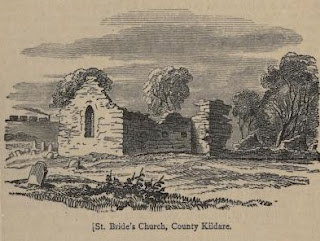 Saint Briga or Brigid of Kilbride, in the Diocese of Lismore , County of Waterford and of Kilbride or Brideschurch, County Kildare. [Possibly in the Fifth or Sixth Century.]

A saint called Briga, the daughter of Congall, is thought to have been "sinchrona" with her great namesake, the renowned Abbess of Kildare. In the Calendar of Cashel, at the 21st of January, she is called St. Brigid of Killbrige, in Lismore diocese. In the Third and Fifth Lives of St. Brigid of Kildare this present holy virgin is called Briga. According to the latter of these authorities, she is said to have lived in the Leinster province, and to have been mother, or superioress, over a monastery and its nuns, who were servants of Christ. From such accounts, Colgan says it is possible she may have been that virgin whose memory was venerated in the Liffy plain, which lies near Kildare.

On the 9th of March, a St. Brigid is venerated, according to the Martyrologies of Tallagh and of Marianus O'Gorman, and she may have been a contemporary with the great St. Brigid, Abbess of Kildare. But Colgan thinks it more probable that the virgin visited at Kilbride was identical with St. Brigid, or Briga, venerated at this day, according to the Calendar of Cashel. From the circumstance recorded of St. Briga having invited the illustrious Abbess of Kildare to her home, she appears to have lived on terms of intimacy with this latter, who wrought one of her many miracles here. This is found related in the acts of St. Brigid, the great patroness of Ireland. Yet, a difficulty is presented, where an account is given of certain transactions occurring in the plain of Theba, or Theabtha, and when it is stated, her friend the holy virgin Briga lived also in that district. For there, as we are told, St. Brigid was asked to visit another pious virgin, called Briga, and at the house of this latter. The Abbess of Kildare accepted such invitation at the time, as she had on similar occasions ; and when arrived at the house, she was received with great joy and honour. According to the usual custom of treating guests, her feet were washed; and the water having been removed, it was afterwards applied by a nun, whose feet had long been crippled with gout. Having washed them with this water, the infirm sister's feet were healed, and almost before they could be wiped.

Saint Brigid afterwards spent a considerable time there, and in conference with the nuns, while treating on various spiritual topics. But the arch-tempter from the beginning, who envied the innocence of our first parents in the garden of Paradise, found means to enter St. Briga's establishment, at a time, too, when the hostess and her illustrious guest were seated at table. His presence was first revealed to St. Brigid, who fixed her eyes steadily on him for a time. Then communicating what she had seen to her entertainer, and signing the eyes of the latter with a sign of the cross, Briga beheld a deformed monster. The holy Abbess of Kildare commanded him to speak, and to make known the purport of his unwelcome visit. The Devil replied: "O holy virgin, I cannot avoid speaking, nor can I disobey your orders, as you observe God's precepts and are affable to the poor and lowly." He then avowed a desire to cause the spiritual death of a nun, who had yielded to his temptations. He even told the name of this nun to the holy abbess, when the latter, charitably calling her, and signing her eyes with a sign of the cross, desired her to behold the monster. The nun was terrified at this sight, and shedding abundance of tears, promised to be more circumspect for the future. Brigid felt great compassion for this penitent, and banished the demon from their presence. Thus, on occasion of her visit, St. Brigid procured the corporal restoration of one, and the spiritual liberation of another, belonging to that sisterhood. Supposing the foregoing transactions to have occurred at Kilbride, or Brideschurch, in the county Kildare, it follows that the present St. Briga—if we have rightly assigned her festival to this date—must have been a special favourite and companion of the illustrious abbess, whose "magnalia," in the earlier period of the Irish church, have been so wonderfully extolled by her biographers.