There is a certain amount of confusion around the feast day of Saint Aed (Aidus in Latin), Bishop of Kildare, as both January 4 and May 10 are mentioned in the sources. This saint is interesting as he is not only an ecclesiastical but also a royal figure, as Canon O'Hanlon explains:

NOTHING appears more remarkable in Irish Church history than the fact, that so many scions of royal and noble houses voluntarily abdicated their worldly rank to assume the humble garb of the monk; thus choosing to be governed rather than to rule. Some account of this saint has been given by Colgan, at the 4th of January; but these short notices are very unsatisfactory. The obscurity of his acts, however, is not the fault of this writer. Most probably St. Aidus was born about the middle or towards the close of the sixth century. From the data afforded us, it appears a matter of great difficulty to unveil the chief incidents of his life. In the "Martyrology of Tallagh," at the 4th of January, we find the entry of Aedin, a bishop.

Various saints, bearing the names Aedh, or Aedhan, appear at different dates in our calendars. In the Feilire of Oengus not only is the present but every other native saint excluded at this date. By Marianus O'Gorman our saint is denominated Aidus; while by other calendarists and writers he is styled indifferently Aedinus, Aedus, and Aedius. According to some accounts St. Aidus is stated to have been King of Leinster ; yet this hardly seems reconcilable with our annalistic chronology. Following the pedigree of the Genealogic Menology, St. Aidus, the bishop, was son to Moelodran, son of Brocan, son to Corbmac, son of Diermeit, son to Eochad Guinech, son of Ere, son to Brecan, son of Fieg, son to Daire Barrigh, son of Catheir the Great. From all we are able to ascertain, it does not seem probable the present saint ever occupied the throne of Leinster although Colgan thinks Aedh Cerr, who ruled over that province, and whose death is noted at A.D. 591, may have only died politically, to have lived forty-seven years subsequently in the religious state. But, besides the usual accurate phraseology of our annalists, and other irreconcilable circumstances, the different fathers of Aedh Cerr and of St. Aidan, the bishop, ought to have shown Colgan how improbable must have been an identity between both. Another conjecture has been ventured upon, that perhaps Aedh Cerr had been a different person from this Saint Aldus, whose name perchance has been omitted from the catalogue of Leinster kings, because he reigned only for a short time, and abdicated a throne to the regret of his people. It seems more than likely, however, that as the present saint was descended from a right regal Leinster line, he may have been some minor potentate connected with that province rather than its chief ruler. It is said, that having abandoned his exalted position, he became a monk in Kildare Monastery. He seems to have been denominated "Dubh," "black," probably from some peculiarity of complexion. 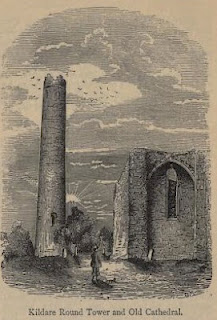 Greatly distinguished for his virtues and merits in the monastic profession, he was afterwards called to preside over the religious as abbot; but, furthermore, he was elevated to the episcopal dignity, and he ruled for some time over the see of Kildare. Although this see maintained a constant succession of zealous and pious prelates from the time of St. Conlath, yet until we come to this St. Aidus's they do not figure on the pages of history with sufficient distinctiveness. Thus he was advanced to spiritual honours, having escaped from royal dignities. He died in the year 638, but we cannot ascertain the duration of his episcopacy. Whether the demise of St. Aidus occurred on a 4th of January, or on a 10th of May, is thought to be uncertain. Colgan has a few notices regarding him at the former date, yet he states, that it might be possible, the memory of St, Aidus had been celebrated on both days. At the 4th of January the "Martyrology of Donegal" simply enters Aedh, bishop. It has been well remarked, that the world knows little of its greatest men; and it seems strange that they should be almost forgotten or not sufficiently honoured, especially in their own country.

A St. Aidus, bishop, is venerated on the 4th of January, according to the Martyrologies of Tallagh and Marianus O'Gorman. According to the same authorities, a St. Aidus, son to Cormac, was venerated on the 10th of May. The great-grandfather to Aidus, King of Leinster, who died A.D. 591, was named Cormac. As the name and Episcopal dignity at the 4th of January would seem to indicate our saint, and as the name of Aidus, the aforesaid Cormac being his ancestor, is found at the 10th of May, hence Colgan confesses himself unable to decide whether the festival of this present saint should be kept on the 4th of January or on the 10th of May. See "Acta Sanctorum Hiberniae," 4 Januarii, nn. 5, 6, p. 14.