January 6 is the feast day of a County Limerick holy man, Saint Curnan Beg. Canon O'Hanlon brings us the few details that he has been able to assemble:

The present St. Curnan, styled Becc or Beg, "little", - probably owing to his small stature - is found recorded in the Martyrology of Tallagh with a festival to his honour, at the 6th day of January. The later Martyrology of Donegal, while noting the veneration paid to St. Curnan Beg on this day, is more precise in giving his genealogy, and the exact place where he was reverenced as patron. The writer of this Calendar, O'Clery, remarks, that we find a Curnan - it is to be assumed the present holy man - a son of Sinell, belonging to the race of Condri, son of Fearghus, son to Ross Ruadh, who was son of Rudhraige. From this latter was derived the Clann-Rudhraighe. St. Curnan Beg is said to have belonged to Cill-Churnain, a place which doubtless derived its denomination from a church or cell there founded by him. There is a parish, known as Kilcornan or Kilcoran, in the barony of Clanwilliam, and county of Tipperary. There an old church in ruins may yet be seen within an ancient burial-ground. The Cill-Churnan, with which our saint was connected, however, seems to be represented in the etymon of Kilcornan parish, situated within the ancient district of Caenraighe, now the barony of Kenry in the diocese and county of Luimneach or Limerick. Within this parish, and quite close to the beautiful demesne of Curragh Chase, are the ruins of an ancient church at Killeen. These vestiges and the old burial-ground most probably mark the former site of St. Curnan Beg's religious establishment. At all events, the writer is assured by Aubrey De Vere, Esq., that he had never heard any tradition regarding any other church-site wthin the bounds of Kilcornan parish. 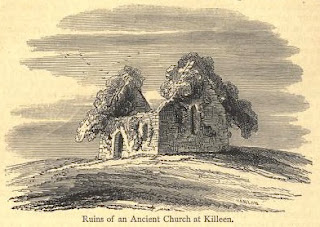 The following are very nearly the dimensions of this old church. In length, it measures about forty-five feet; in breadth, it is about twenty-four feet; the height of the side-walls reaches to about fourteen feet; while the height of the gables is about twenty-two feet. The walls are about two feet nine inches in thickness. There are windows at both sides, three feet high, and six inches wide. There is a window at the east end. Under the gable, at the west end, there is a space about six feet by two - probably a window, or possibly the space for hanging a bell. The church does not appear to lie exactly east and west. In the northern wall, opposite the entrance, there is an arch, nearly filled up with masonry. This appears to have been, at one time, a second entrance: it is about seven feet and a half-foot in height by about three feet in width. The entrance is at the southern side, and it consists of an arched opening, six feet by three feet. It stands on a gentle, grassy slope, about six feet high, and in a rough green field, with a few bushes and brambles overgrowing. The walls slant externally from about four feet near the foundations, while this circumstance imparts a character of solidity and dignity to the antique structure. It stands on an elevated slope of about twenty feet over the adjoining grounds....