Not a great deal is known of Saint Cannera of Bantry, commemorated on January 28, apart from the details of an encounter she had with Saint Senan of Scattery Island (Inis Cathaig), recorded in that saint's Life.

The feast of Saint Cannera is recorded at January 28 in the Martyrologies of Tallagh and of Gorman. The latter describes her as 'dear Cainer' and notes that she was daughter of Cruithnechan in Cell Cuilinn in Cairbre. The entry in the Martyrology of Donegal reads:

The hagiologist, Father John Colgan, published her Acts at this day, but it is to the Life of Saint Senan that we must turn for a glimpse into Cannera's life:

2416. Canair the Pious, a holy maiden of the Benntraige of the south of Ireland, set up a hermitage in her own territory. There one night, after nocturns, she was praying, when all the churches of Ireland appeared to her. And it seemed that a tower of fire rose up to heaven from each of the churches; but the greatest of the towers, and the straightest towards heaven, was that which rose from Inis Cathaig.'Fair is yon cell', she saith. 'Thither will I go, that my resurrection may be near it'. Straightway on she went, without guidance save the tower of fire which she beheld ablaze without ceasing day and night before her, till she came thither. Now, when she had reached the shore of Luimnech, she crossed the sea with dry feet as if she were on smooth land, till she came to Inis Cathaig. Now Senan knew that thing, and he went to the harbour to meet her, and he gave her welcome.

2426. 'Yea, I have come' saith Canair.
'Go' saith Senan, 'to thy sister who dwells in yon island in the east, that thou mayest have guesting therein'.
'Not for that have we come' saith Canair, 'but that I may have guesting with thee in this island'.
'Women enter not this island', saith Senan.
'How canst thou say that?' saith Canair. 'Christ is no worse than thou. Christ came to redeem women no less than to redeem men. No less did He suffer for the sake of women than for the sake of men. Women have given service and tendance unto Christ and His Apostles. No less than men do women enter the heavenly kingdom. Why, then, shouldst thou not take women to thee in thine island?'
'Thou art stubborn' saith Senan.
'What then' saith Canair, 'shall I get what I ask for, a place for my side in this isle and the Sacrament from thee to me?'
'A place of resurrection' saith Senan, 'will be given thee here on the brink of the wave, but I fear that the sea will carry off thy remains'
'God will grant me' saith Canair, 'that the spot wherein I shall lie will not be the first that the sea will bear away'.
'Thou hast leave then' saith Senan, 'to come on shore'. For thus had she been while they were in converse, standing up on the wave, with her staff under her bosom, as if she were on land. Then Canair came on shore, and the Sacrament was administered to her, and she straightway went to heaven.

2447. God granted unto Canair that whoso visits her church before going on the sea shall not be drowned between going and returning. 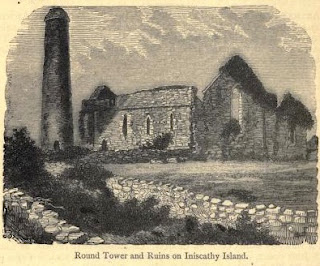 This encounter between the two saints has ensured the translation of Saint Cannera to our own times as a feminist and supporter of the ordination of women. I find it interesting that people today seem to be very taken with the notion that the early Irish church was influenced by the eastern tradition of monasticism, whilst at the same time completely ignoring the realities of that tradition. I doubt that any Greek monk, for example, would find anything exceptional about Saint Senan's desire to turn Saint Cannera away, for women are banned from entering the monastic site of Mount Athos to this day.

It is thus unfair to Saint Senan to brand him as a misogynist for wishing to pursue his monastic vocation without the presence of women. We are also told on page 221 of the saint's Life that when his death was approaching, Saint Senan went out of his way to visit a community of nuns to whom he had personally given the veil:

So he went on that side, and he visited Cell Eochaille to commence with Ner's daughters who were dwelling there, pious, holy virgins, who had taken the veil at Senan's hand, and who were under his spiritual direction. Then they entreat Senan that the body of (some) lowly monk of his community might be given to them, to be buried by us, so that his relics may be protecting us. 'Verily' saith Senan, 'this shall be granted to you. Be in no distress as to one from whom your protection shall come'.

In any case, the account of his encounter with Saint Cannera reads to me as if Saint Senan rather admires her stubborness, and he does grant her request. Her memory as a protectress of those at sea seems to have survived too, and I hope to be able to trace a copy of a 16th-century poem which asks for her blessing on a ship and its crew.

I understand that Scattery Island is currently uninhabited, so both Saint Cannera and Saint Senan may enjoy their rest undisturbed.