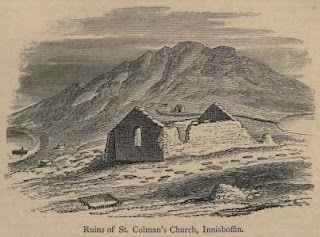 January 14 sees the commemoration on the Irish calendars of a seventh/eighth-century monastic saint, Báetán, abbot of Inis-mór. There a number of locations in different parts of Ireland which share this place name, but Canon O'Hanlon associates our abbot with the the seventh-century monastic foundation of St Colman at Inisbofin island, off the coast of County Mayo and suggests that Saint Baetan may have been one of the founder's early successors:

AMONG the commemorations this day, we read in the Martyrology of Donegal, concerning Baodan Mor, son to Lughaidh, and Abbot of Inis-mor. He is entered in the Martyrology of Tallagh, as Baetan, son of Lugeus, on the 14th of January. In the latter record, he is likewise said to have been a bishop. At the year 711, the death of Baetan, Bishop of Inis-Bo-Finne, is recorded in the Annals of the Four Masters. Those of Ulster place it at A.D. 712. Under the head of Inis Mor, Duald Mac Firbis enters Baeden, bishop, for January 14th. Colgan —offers a conjecture but without much confidence — that this St. Baedan may be identical with a St. Buadmael, a disciple of St. Benignus and of St. Patrick, who died at Kill Buadmael, near the River Shannon. Yet, it is plainly seen, the place of this saint and the date assigned for his death exclude such a supposition. The island of Inishbofin gives name to a parish in the barony of Murrisk, and county of Mayo. Some ancient monastic remains are to be seen here, adjoining St. Colman's Well and Church Lough. The monastic institution is said to have been founded there by St. Colman, A.D. 667, and he died A.D. 674. St. Coenchomra is said to have succeeded him in the government of this monastery; and, in such case, it would be probable, the present saint Baetan was his immediate successor. St. Coenchomra was connected with another Inis-bo-finn. How long St. Baetan's term of incumbency lasted, we have no dates preserved to aid in determining. There are two other islands, named Inis-bo-finne in Ireland; one of these is in the county of Donegal, near Tory Island, while the other is situated in Lough Ree, on the River Shannon. Neither of these islands, however, is of such celebrity as this Western Inis-bo-finne, which Dempster has sought even to connect with Scotland. Remote as its situation was, for centuries the voice of prayer and the song of praise to God rose above the murmurings of the wild Atlantic waves that surged around its shores.

The old oratory of St. Colman, on the Island of Innisbofifin, yet remains. The ruined quadrangle measures externally 61 feet in length by 23 feet in width. The walls are about three feet in thickness. The oriel window measures, on the outside, 2 feet, and on the inside, it is splayed to a breadth of 5 feet; while it is 6 feet 6 inches in height. On the eastern gable are two buttresses ; the buttress towards the south is 6 feet thick, and that towards the north is only 5 feet 6 inches. Small side-windows are broken away. In the south side wall and west gable are two doors of similar dimensions, viz., 5 feet in height by 4 feet in width. No mullions are to be found in the windows; while the arches of oriels and doors are very flat. The stones are placed edgewise, and the mortar in the walls is very adhesive. St. Flannan's
well is enclosed, about 100 paces from the ruin, with a stream running between both. The ruin is in a deep valley. The water of the more immediate north hill is carried clear of the church-site through a drain sunk by the monks, and it is effective to this day. No stones of the building are dressed; while the church stands on a natural rock-terrace 8 or 10 feet high. Around the ruins grow some few briars, the only shrub. It is a hoary, grey stone church, still in good preservation, so that one doubts if it be the original foundation of St. Colman. On one side of the ruin is an eminence called Knock. On the right, as represented in the engraving, is a sheet of water, called Lough Teampul, on the left is the Atlantic Ocean.

There is a website for the island of Inisbofin with some illustrated pages on its Christian heritage here.

May the intercession of all the saints associated with this western isle be with us!
Note: This post was first published in 2013 and revised in 2023 to include Canon O'Hanlon's entry for the saint from Volume I of his Lives of the Irish Saints in full.