The commemoration of Saint Laidgen is noted on all of the major Irish calendars at January 12. Saint Laidgen or Laidcenn was a monastic associated with the foundation of St Lua or Molua at what is now the parish of Kyle or Clonfertmulloe, County Laois. Canon  O'Hanlon summarizes the account of his life from Colgan's "Acta Sanctorum Hiberniae," xii. Januarii. Vita S. Laidgenni, pp. 57, 58:


'This saint was son to a man named Baithus Bannaigh, or Buadhach, which means Baithus the Victorious. Laidgen thus belonged to a very respectable parentage. Yet, we are told, he abandoned the riches and honours of this world, to become a monk in Clonfert Molua Monastery. This must have been soon after its foundation. Here, under the direction of its abbot, St. Lactan, the disciple became distinguished for all the virtues of his state ; and in order to forget worldly allurements, St. Laidgen's thoughts were continually occupied with enjoyable meditations on eternal life. He was exercised in all the humble practices of penance. He spent many years in performing his usual monastic observances, and in the cultivation of extraordinary virtues, which were the admiration of his fellow religious. He wrought many miracles. It seems possible—but by no means certain—that this holy man may have been under the direction of the illustrious founder, who died in the year 605.'

However, as O'Hanlon goes on to hint, this saint must have been more than just a simple monk:

' The memory of St. Laidgen was celebrated at Clonfert Molloe with a devotion second only to that entertained towards the founder of this house. Our saint died on the 12th of day of January in the year 660. He was buried in Clonfert Molua. That this saint was notable amongst most distinguished holy men in his time may be collected from the circumstance of his being named in the Festilogy of St. Oengus, written before or soon after the year 800 ; for in this no saint is mentioned who was not considered to hold a high rank in the Irish Church, and whose memory was not honoured by a special festival. The following Irish stanza and its English translation were supplied by Professor O'Looney, from the Laebhar-Breac copy, R.I.A., fol. 79:

E. ii. id.
The great martyrdom of Muscenti
With his numerous gentle clerics
Christ hath the secret of his deserts
Laidcend, son of Bath Baidach.


The name of this saint is written Laidcenn mac Baith Banaigh, in the Martyrology of Tallagh, at the 12th of January. The Calendars of Cashel, and of Marianus O'Gorman attest the same festival. The "Kalendarium Drummondiense" observes that on the 12th of January the holy confessor Ladchend ascended to the stars. In the Martyrology of Donegal, we find recorded on this day Laidhgenn, son of Baeth, of Cluain-fearta-Mulloe, or Clonfert Molua. There his burial place is said to have been. All our hagiologists and annalistic writers commemorate this saint. Besides this saint Laidgen, there were three other saints bearing the same name, and recorded in our Annals. These were, a St. Laidgen, venerated on the 20th of May; a St. Laidgen, commemorated on the 23rd of October; and a third St. Laidgen, son to Bochra, who, with his brothers, St. Cannech and St. Accobran, had been honoured at a place called Achadh-raithin, in the country of the Decias, on the 28th of November. 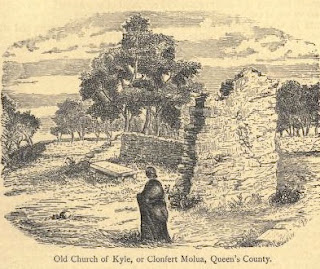 In addition to his commemoration in the various Martyrologies, our saint's death is also noted in various Irish Annals:

The "Annals of Clonmacnoise," of Roscrea, of All Saints' Island, and of Ulster, place his demise at the year 660. At this same year his death is thus recorded by the Annals of the Four Masters, "St. Laidhgeann, son of Baeth, of Cluainfearta-Molua, died on the I2th of January."—O'Donovan's edition, vol. i., pp. 270, 271.

Finally, Canon O'Hanlon also helpfully lists some of the other saints associated with the monastery of Clonfert-molua in a footnote:

'Many holy persons are venerated in that place, such as Luanus, at the 4th of August ; St. Lactan, his disciple and successor, at the 19th of March; Saints Chrittanus, Lonanus, and Mellanus, sons to Dareus, at the 7th of February; Soergalus, Moenachus Finginus, with other saints and celebrated abbots. Of none, however, with the exception of our saint, is it remarked that their tomb is there to be seen.'

So, it appears that Saint Laigden of Clonfert-Molua must indeed have been more than just a simple monastic for his memory to be so recorded and revered. I thank God that we are able to continue to remember him more than 1300 years after his death.