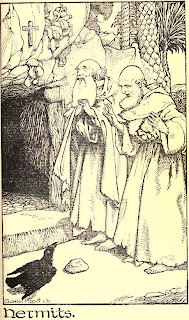 Canon O'Hanlon notes that the early Irish church celebrated the Feast of the Conversion of Saint Paul on January 25th:

The Felire of St. Oengus contains no festival for an Irish saint at the 25th of January, as may be seen in the following Irish extract, and its English translation, furnished by Professor O'Looney; but, instead, it thus alludes to the conversion of St. Paul the Apostle:—

D.uiii.kl.—Not insignificant the festival,
A festival on which solemnity is made
To Christ multitudes repaired
Paul in the judgment of baptism.

It also seems that because of this feastday, the great seventeenth-century hagiologist Father John Colgan decided to publish the Acts of Blessed Paul the Hermit at this date. It was claimed that this Irish Paul was one of the early disciples of Saint Patrick, converting, according to Colgan, around the year 442.

His story, however, continues in the Voyage of Saint Brendan, when the intrepid sailors encounter a hermit straight out of the eastern tradition of the Desert Fathers. Saint Brendan has already forewarned his brethern on the approach to a small island, that they will see a ‘holy hermit, called Paul the Spiritual, who has dwelt there for sixty years without corporeal food, and who for twenty years previously received his food from a certain animal.’ Saint Brendan respectfully goes ashore first to seek permission to disembark his crew, who are in for some further surprises:

When they came he gave each of them the kiss of peace, calling him by his proper name, at which they all marvelled much, because of the prophetic spirit thus shown. They also wondered at his dress, for he was covered all over from head to foot with the hair of his body, which was white as snow from old age, and no other garment had he save this.

Saint Brendan protests his own unworthiness in the spiritual life when faced with this extreme ascetic witness:

Woe is me, a poor sinner, who wear a monk’s habit, and who rule over many monks, when I here see a man of angelic condition, dwelling still in the flesh, yet unmolested by the vices of the flesh.’ On this, the man of God said: ‘Venerable father, what great and wonderful things has God shown to thee, which He has not revealed to our saintly predecessors! and yet, you say in your heart that you are not worthy to wear the habit of a monk; I say to you, that you are greater than any monk, for the monk is fed and clothed by the labour of his own hands, while God has fed and clothed you and all your brethren for seven years in His own mysterious ways; and I, wretch that I am, sit here upon this rock, without any covering, save the hair of my body.

The hermit goes on to tell the visitors something of his earlier life and it is here that Saint Patrick makes a reappearance:

For forty years I lived in the monastery of St Patrick, and had the care of the cemetery. One day when the prior had pointed out to me the place for the burial of a deceased brother, there appeared before me an old man, whom I knew not, who said: ‘Do not, brother, make the grave there, for that is the burial-place of another.’ I said’ ‘Who are you, father?’ ‘Do you not know me?’ said he. ‘Am I not your abbot?’ ‘St Patrick is my abbot,’ I said. 'I am he,’ he said; 'and yesterday I departed this life and this is my burial-place.’ He then pointed out to me another place, saying: ‘Here you will inter our deceased brother; but tell no one what I have said to you. Go down on to-morrow to the shore, and there you will find a boat that will bear you to that place where you shall await the day of your death.’ Next morning, in obedience to the directions of the abbot, I went to the place appointed, and found what he had promised. I entered the boat, and rowed along for three days and nights, and then I allowed the boat to drift whither the wind drove it. On the seventh day, this rock appeared, upon which I at once landed, and I pushed off the boat with my foot, that it may return whence it had come, when it cut through the waves in a rapid course to the land it had left.

On the day of my arrival here, about the hour of none, a certain animal, walking on its hind legs, brought to me in its fore paws a fish for my dinner, and a bundle of dry brushwood to make a fire, and having set these before me, went away as it came. I struck fire with a flint and steel, and cooked the fish for my meal; and thus, for thirty years, the same provider brought every third day the same quantity of food, one fish at a time, so that I felt no want of food or of drink either; for, thanks to God, every Sunday there flowed from the rock water enough to slake my thirst and to wash myself.

After those thirty years I discovered these two caves and this spring-well, on the waters of which I have lived for sixty years, without any other nourishment whatsoever. For ninety years, therefore, I have dwelt on this island, subsisting for thirty years of these on fish, and for sixty years on the water of this spring. I had already lived fifty years in my own country, so that all the years of my life are now one hundred and forty; and for what may remain, I have to await here in the flesh the day of my judgment.

(Section 26 of the Voyage of Saint Brendan)

Besides the legendary cast of this narrative, and a want of apparent connection between the Paul there named with the holy hermit who lived so long as a companion of St. Patrick; the period for extension of his life must preclude all reasonable probability, that the great apostle's disciple could have survived and have borne the rigours of his isolated position until the time of St. Brendan's supposed visit to him.

An earlier writer, Father John Lanigan, who published a three-volume ecclesiastical history of Ireland in the 1820s, was rather more blunt:

Colgan has (at 25 Jan.) what he calls the Acts of this Paul. The greater part of them is nothing else than a corrupt and ridiculous imitation of the history of St. Paul of Egypt, the first hermit; with this difference that, instead of a continental desert, the Irish Paul is made to pass his lonely days in a desert island.

The Life of Saint Paul of Thebes was written by Saint Jerome in the fourth century, and in it the eremetic ideal that Saint Paul embodies, by withdrawing to the desert and subsisting on the fruit of a palm tree and on bread supplied by a raven, is held up as superior to the 'worldliness' of other forms of monasticism.

A more recent commentator suggests that there may thus have been another agenda underlying the encounter between Saint Brendan and the hermit:

Paul the Hermit makes a surprise cameo appearance in the anonymous Navigatio Sancti Brendani; though in that work the hermit has been a disciple of Patrick and now subsists on nothing. Although shards of Jerome's Latin remain, the author seems consciously to reverse Jerome's message: Brendan complains that his life is nothing like the hermit's, but Paul contradicts him, pronouncing Brendan's particular care of his monastic familia to be the more blessed calling. It almost seems as if the author of the Navigatio were attempting to champion a native Irish community of monks over the eremetic ideal.