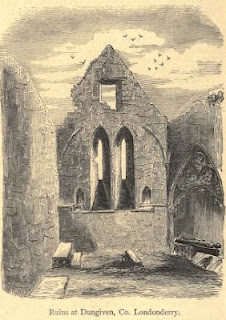 On January 8 the Irish Martyrologies commemorate a seventh-century Scottish saint associated with the monastery at Dungiven, County Derry. North-west Ulster has always had strong links with Scotland and Saint Neachtain appears to have been born in Scotland but to have founded a monastery in the territory of a tribe called the Cianachta. They occupied the lands of the Roe Valley, but their chief royal site was at Dungiven. One scholar has suggested that they were mercenary vassals of the Uí Neill, rewarded with lands for their services 'much as the gallowglass clans from Scotland and the Isles were rewarded with irish lands by the Gaelic lords of the later middle ages' (F.J.Byrne, Irish kings and high-kings (London, 1973), 68.) The Irish annals name two saints associated with the Cianachta - a convert of Saint Patrick's called Ciannan, founder of Duleek in County Meath, whose death is recorded in 489, and Nechtan Ner of Dungiven, whose death is ascribed to 679. Canon O'Hanlon will guide us through the story of Saint Neachtain:

The present holy man was probably the first founder of a church here, and he seems to have been taken as the local patron. The Martyrology of Donegal enters the festival of St. Nechtain of Dun Geimhim, in Cianachta Glinne Geimhin, at this date. He is commemorated in the Martyrology of Tallagh, on the 8th of January. Most likely he was born about the beginning of the seventh century.

It seems to be doubtful, whether the present holy man had been born in Ireland or in Scotland. In a gloss to the Feilire of St. Oengus, we read, “anair de Albain," i.e., "from the east, from Alba," applied to the name of Nechtan. It may be probable, he was born in the latter country, or at least that he came over from it into Ireland. He has been identified with the great saint of Deeside, called Nathalan, in the Breviary of Aberdeen. This holy man is called Nachlan or Naughlan, by the common people. According to the Aberdeen Breviary, he is thought to have been born in the northern parts of the Scoti, in ancient times, and at Tullicht, within the diocese of Aberdeen.

He was a man of great sanctity and devotion. Though educated as the member of a noble family, when he learned that turning the soil approached nearest to the occupation which favoured holy meditation, he abandoned all other pursuits to cultivate fields. Thus he wished the body to be industriously occupied, so that he might never allow his mind to be overborne in a struggle with dangerous temptations. While he thus waged warfare against the devil and a perishing world, a terrible famine broke out among his neighbours, relations, and friends. Most of the people were nearly lost, owing to hunger and want of food. But the singularly disinterested Nathalan, moved by the highest spirit of charity, distributed all his grain and stores, in the name of Christ, to the poor. At the spring time, no seed was left him, even to sow his lands; yet, God wrought a miracle, which produced an abundant harvest. When this time came, however, and when a great multitude of both sexes had been collected to gather in the crop, a tremendous tempest of rain and a whirlwind prevented the husbandmen and women from pursuing their labours. For a moment losing patience, and being excited to anger, along with other reapers, the saint murmured a little against God. The tempest soon ceased. But, on second thought, Nathalan, feeling he had offended the Divine Majesty, was induced to bind himself by vow to continue a rigid course of penance. This ended, it is stated, and in a miraculous way, after he had visited the thresholds of the Blessed Apostles Peter and Paul, in the city of Rome. There, too, he sought the monuments of the saints, so thickly placed on every side. Hearing a report of his extraordinary miracles and sanctity, the Supreme Pontiff summoned him into his presence. Notwithstanding the saint's reluctance, he was persuaded, at length, to assume the episcopal dignity. If we are to place implicit faith in these accounts, probably either before his going to Rome or after he had left it, the saint visited Ireland, and then he must have founded Dungiven, or at least he spent some time there. But, it must be allowed, we feel at a loss to determine the period.

In the practice of Divine contemplation, having rendered himself very acceptable to all at Rome, by permission of the Sovereign Pontiff, as we are informed, Nathalan got permission for returning to that part of Scotia, whence he sprung. In extreme old age, he visited his natal soil. He then built the churches of Tullicht, Bothelim, and Colle, at his own expense. He also dedicated them to the Almighty, and long afterwards they existed in those provinces, as monuments of his zeal.

The death of St. Nechtain occurred A.d. 677, according to the Annals of the Four Masters, but we find the rest of Neachtain Neir recorded A.D. 678, in the Annals of Ulster. We meet no less than four different saints of this name recorded in our calendars - One at 22nd of April—erroneously assigned by Colgan's printer to the 11th;— another at the 2nd of May—St. Patrick's disciple;— St. Neachtain, a virgin, at the 22nd of November, besides the present saint.

It would seem that this holy man died in Britain, on the 8th of January, after the performance of many wonderful miracles. He is said to have been buried with great reverence at Tullicht. St. Nachlan is patron of Tullicht. There in after time he often afforded health to the sick, who came to seek it piously and devoutly. At Tullicht a cross of very early type, incised on a rude granite slab, once lay in the parish church. It now forms the top lintel to one of the doors of the old kirk there. He is also the patron of Balthelney, or rather Bothelney, now Meldrum. Owing to the fervour of his prayers, Nathelan is said to have averted a raging pestilence from this place. Long after this tradition, and when the saint's name was even forgotten, the parishioners kept the 8th of January as a feast, on which they did no work. At the old kirk here, about three miles from the town of Old Meldrum, is Naughlan's Well. At Collie or Cowle, his name is rhymed among the fishermen:

and in the parish of Kildalton, in Islay, we find Kilnaughtan.