June 3 is the feastday of one of the most famous of the Irish saints, Kevin of Glendalough. Saint Kevin shares this day with a number of lesser-known Irish saints, one of whom is another County Wicklow saint, Affine of Killaffan, with whose foundation Saint Kevin is linked. What the relationship of the Wicklow Affine is to the saint who gave his name to a locality in County Galway, Killafeen, I am unsure. The website of the Galway Library quotes Joyce's classic study of Irish placenames as saying:

Killafeen in Galway; St. Aiffen's church. There was a Killafiein near Glendalough, but its name and position are forgotten. See Effin [reproduced below].

Effin in Limerick; St. Eimhín or Effin, who had his church here, was a contemporary of St. Kevin of Glendalough (sixth century), and had another church near Glendalough. The full name of this place was Cill-Eimhín or Killeffin; but the "Kill" was dropped out and the patron's name alone remained, like "Columkill", parishes in Kilkenny and Longford.

In his account of Saint Affine, Canon O'Hanlon brings us the details only of the saint's link with Glendalough. He also brings an account of a miracle of Saint Kevin involving some ungracious travelling harpers, some details of which I have transferred from the footnotes into the main text:

This day, the Martyrology of Tallagh simply enters Affine, at the 3rd of June. His locality is not even mentioned, in this record. In an Irish Life of St. Kevin, it is stated, that St. Effinus or Ifinus had a convent of monks, at Killeffin, under St. Kevin; and, in it, two legends are given connected with his church. The latter of these is thus rendered into English, by John O'Donovan: One day, minstrels came with their harps to Killeffin, where St. Kevin had a convent of monks. They asked entertainment from them, but the convent had no food. For that reason, St. Kevin and inmates of the convent became very much ashamed. It happened, however, that a small quantity of seed remained; yet, this not being sufficient to entertain the strangers, St. Kevin bethought him of an expedient, to prevent his getting the name of being inhospitable. He sent a party of the monks to dig plots,in which the small quantity of seed they had might be sown, and in order that the produce might be prepared for the strangers' dinner towards evening. In the meantime, St. Kevin himself and another party of the monks remained to entertain the minstrels, and to kill time by kind and friendly conversation; but, this was of no avail to them, for the minstrels began pressingly to demand refreshments. These not being at hand, they took their leave of St. Kevin against his will, muttering their disapprobation, because the convent had not satisfied their requirements. [Afterwards, Saint Kevin is said to have prayed, that the harps which they bore might be turned into stones; and when they were crossing a river, which lies to the south of the church, their harps were metamorphosed into stones, and they fell into the stream. There they remained in the ford, under the feet of all, from that day to the time of the written legend.]   The legend relates, furthermore, that the seed, which St. Kevin had sown at Killeffin, grew up before evening, and of its produce the monks were fed that same night. There is more tillage, and the land is more fertile around Our Lady's Church than any other in the valley; wherefore it is thought to be more than probable that it is the Kill Effin above mentioned. 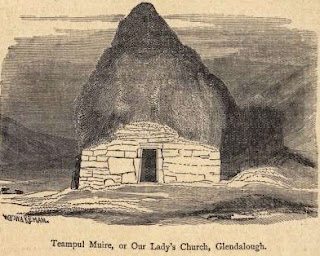 [We are told, that Solomon, the disciple of St. Kevin, states this occurrence, in the following translation of an Irish Rann:

"The seed which was sown in the morn
At Kill Effin of divine prosperity,
Of its produce flourishing at night
Sages were respectively fed."]

...A festival in honour of Aiffen of Cill Aiffein—now Killaffan—near Gleann-da-loch, is entered in the Martyrology of Donegal, as having been celebrated on this day... In the posthumous List of Colgan's Manuscripts, the Acts of a St. Alphinus had been prepared for publication, at this date. He may possibly be identical with the present St. Affine or Aiffen.