June 25 is the commemoration of a County Offaly saint, Sincheall of Killeigh. There is a saint of this name associated with the household of Saint Patrick who is commemorated on March 26, he is distinguished as Sincheall the Elder and may have been related to the present saint. The Irish calendars preserve this distinction and the two separate feastdays, as Canon O'Hanlon explains:

THE present holy man appears to have figured, at an early period, in our ecclesiastical history, although few particulars regarding him have come down to our times. At this date, in the Martyrology of Tallagh, a festival is registered, in honour of Sincheall the Younger. The holy man bearing this name, and known as the Elder St. Seancheall, was the son of Ceanannan, or Ceannfhionnan, and he was venerated, at the 26th of March. Of him we have already treated, at that date; and, so far as we can ascertain from our Genealogies of the Irish Saints, the present St. Sincheall the Younger must have flourished contemporaneously with his namesake, to whom he was related, and not in a very remote degree. A certain district of ancient Ofalia territory was denominated Droma Foda, or "the long ridge;" and this was truly descriptive of an extended elevation over a plain, which is prolonged from the Slieve Bloom Mountains to the Hill of Allen, and from Cruachan co the Hills of Killone near the Great Heath of Maryborough. There was likewise a Cill Achaidh celebrated in our ecclesiastical Annals, and it was situated in Eastern Breifney. The Elder St. Sinchaell seems to have been the first Abbot, and probably the founder of Cill or Gleannachaidh of Droma Foda ; the term Cill having been prefixed, after St. Sincheall the Elder had placed his church there. Wherefore, the denomination Cill Achaidh Droma Fota signifies "the Church of the Field of the long Ridge." Such a rising ground is treacable immediately over the village of Killeagh, and it stretches to the south-west. This place was identical with the present neat group of houses, in the barony of Geashill, King's County. At this village are several traces of old monastic buildings; some of which, however, are almost effaced. But, a considerable part of the more modern portions of an abbey which was there has been incorporated with a fine-looking old mansion and its offices, near that village. In the "Feilire" of St. Aengus, at the 25th of June, the Feast of this St. Sinchell occurs. On this, too, there is a comment, which identifies him with Cell Achid Sinchill, in Offaly. It seems probable enough, that the present holy man spent some time in the monastery of Killeigh with the Elder St. Sincheall, and that he succeeded him in the government of a community there established. This was probably sometime after the middle of the sixth century. It is stated, that soon after the arrival of the English, the family of Warren had established a nunnery here, for nuns of the Augustinian Order. According to the "Annals of the Four Masters," O'Conor Faly erected a monastery at Cill Achaidh in 1393 for Friars of the Order of St. Francis. A part of this modern religious house is said to be still standing, while tradition relates, that it was formerly very extensive, and that the friars who dwelt there were very numerous. It is the opinion of John O'Donovan, that the ruins of both these religious foundations are near the present Protestant church and the cemetery adjoining.

No less than nine holy wells were to be seen near the village; and the old inhabitants had a tradition, that these were dedicated only to the Patron. Wherefore, they should be denominated St. Sincheall's Wells; but, at present, they are locally called Killeagh Holy Wells. Formerly, they were much resorted to by great numbers of people, for the cure of various diseases. These several springs are in a rich meadow field near Killeigh. Even yet, they are resorted to by the people, who perform stations. No particular day, however, is selected for this purpose. The water is exceedingly clear and well-tasted, and for the most part, the tiny rivulet—for there is only one chief stream—is covered with green cresses. The memory of the patron saint—probably St. Sincheall the Elder—now appears to be lost. There is still extant a list of pious customs and usages, which regulated St. Sinchell's school. It also comprises very instructive axioms and proverbs, replete with the wisdom of our ancestors in the Faith. This collection appears, however, to have been the work of the Elder St. Sincheall. It seems likely, moreover, that these usages had been received and practised by the Younger St. Sincheall. We find no further account regarding the Acts of the latter holy man. It is probable, he lived and died in the monastery at Killeigh, although the year and place of his departure are not found in our Annals. At the 25th of June, however, the feast of St. Sincheall the Younger is set down, in the Martyrology of Donegal... 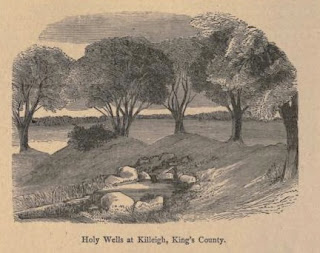