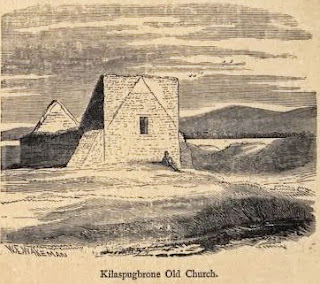 June 8 is the commemoration of a County Sligo saint, Brón of Killaspugbrone (Ceall Easpaig Bhróin 'the church of Bishop Brón'), which some sources also refer to as Cassel-Irra. There is no written Life of Saint Brón but he features in the hagiography of both Saint Patrick and Saint Brigid. Indeed, the genealogical sources portray Saint Brón as being a blood relative of the Irish patroness, as Professor Ó Riain records in his Dictionary of Irish Saints. Canon O'Hanlon mentions in his account below that Saint Brón was the son of Icnus, but Ó Riain adds his maternal genealogy, saying that he was 'one of the forty-seven children - mostly associated with churches in north Connacht - credited to Cuman daughter of Dallbhrónach, a sister of Brighid of Kildare'. At my other blog here I have recorded the account of a miracle from the vernacular Life of Saint Brigid where, fortunately for Saint Brón, his illustrious aunt is on hand when he is falsely accused of fathering a child. It just remains to say that sadly by the nineteenth century, the memory of Saint Brón had been lost in the local area, but the Sligo Heritage site has recovered some of the indigenous folklore and published it here.

ALTHOUGH having close relations, with the great Apostle of Ireland; yet, little seems to be known, regarding the personal history of this primitive and holy bishop. It was the intention of Father John Colgan, had he lived, to have published the Acts of St. Bron, at the 8th day of June. In the published edition of the Martyrology of Tallagh, we find mention of "Broin Esp. Caisil," at the vi. of the Ides (8th) of June. The Bollandists notice the Irish Bishop Bron, at this same date, and refer to Colgan's published work; while, they remark, that he had promised to give more regarding him, at the 8th of June, and the fulfilment of which promise was to be expected at the hands of succeeding Franciscans.

Although of obscure origin, it is said, that St. Bron was the son of Icnus. In the Tripartite Life of St. Patrick, Bron or Bronius is called "Alius ignis," but more correctly perhaps, "filius Icnus." Colgan says, he is at a loss to know, why this saint was called "filius ignis," unless it were that his father's name had been Aodh, or Oedh, which signifies fire. This holy man is mentioned on more than one occasion, in the Acts of the Irish Apostle. Thus, while he was in the region called Dumha-graidh, beyond the Shannon, St. Patrick had an internal revelation, that St. Bron, the monk Olcan, and his disciple Macerca,  were on their way to visit him, but that they were afraid to cross at Traigh-eothuile. Through the miraculous agency of Ireland's Apostle, however, they were freed from all danger. St. Bron was a disciple of St. Patrick,  and probably, at that time, when the Irish Apostle first journeyed to Connaught. He was elevated to the episcopal dignity, also, by the Irish Apostle.  St. Bron is said to have ordained St. Maneus, who was baptized by St. Patrick. With the holy man and one named Bitseus, St. Bron assisted at the consecration of Bishop Carellus,  who was set over the Church of Tanmach.

St. Patrick passed from Forrach-mac-n Amhalgaidh, or "the Assembly Place of the Sons of Awley,” to Ros Filiorum Caitni, where he built a church. Crossing the Muaidh or Moy, at Bertriga or Bartragh, he raised a cross there, and he proceeded thence to the mound of Riabart, near which he built a church for his disciple. Another structure is traditionally connected with St. Patrick, while in this part of the country, and with it a legend is associated. This speck of land, which rises over Cummeen Strand, is known as Doonan Patrick, a church in ruins being seen to the south-west. The peninsula here alluded to lies south-west of Sligo town. In St. Patrick's Tripartite Life, this was called the Church of Cassel Irra, the foundations of which were laid by Bron. We find, however, in one account, that the church of this holy bishop was known as Cuil-Iorre. The name Cassel Irra is no longer remembered among the people, although Cuil-irra is still retained in this part of the country, as a denomination which applies to a district of land, lying west of Sligo town.

The people say, that Cuil-irra extends from where Killaspugbrone is bounded by St. John's parish, to the east and south-east, and southwards to Ballindroichet. This old church, now in ruins, is situated in the townland of Killaspoigbrone, and it is close to the sea-shore. At the present time, the church which was founded here is known by the name of Killaspugbrone, being called after St. Bron.  This name seems to be as old as the end of the fifth, or the beginning of the sixth, century. The present name, Killaspugbrone, is very little altered from the orignal Cill-easpuig-Broin,or " the church of bishop Bronus." The former territory of Cassel-Irra comprised the present parishes of Killaspugbrone and Kilmacowen, in Carbury barony, county of Sligo. The last-named of those two denominations now forms a parish, a short distance south-west of Sligo town. In the townland of Killmacowen, there is an old church in ruins, at which there is also a well, dedicated to the great Irish Apostle. There is a stone at this well, which presents a reddish or rust-like colour, and it is indented, the people say, with an impression of St. Patrick's knee, and stained with the blood of this same saint. Nothing is now known of the saint to whom this parish  is dedicated.

In the Life of St. Brigid, Patroness of Kildare, the primitive bishop of this locality, St. Bron, is specially noticed. It is stated, that he was present at a Synod, where St. Patrick and himself attended.  A very scandalous falsehood had been concocted by an infamous woman, who preferred an unfounded charge against Bishop Broon, St. Patrick's disciple. This is said to have been disproved by a miracle, through which the innocent bishop's character had been amply vindicated.  In the presence of all assembled, the woman professed her repentance, while the sanctity of our saint was gloriously magnified. However, the whole account of this matter is false and contradictory; for, there are several irreconcilable particulars, in different versions of the narrative. The two first Lives of St. Brigid omit it altogether, although relating several of her miracles less remarkable, and worthy of being recorded. A ruined little church still remains on the very spot, where St. Bron officiated ; but, it cannot be the structure erected in the time of St. Patrick, for the style of masonry proves, that it belongs to a very much later period. In the beginning of this century, a village adjacent to the old church was gradually engulfed by the blowing sands, and its inhabitants, as a consequence, were compelled to remove.

Our saint died on the 8th day of the month of June, in the beginning of the sixth century. In the Irish Calendar, at the vi. of the Ides of June, corresponding with June 8th, this saint is commemorated. On the 8th of June, the O'Clerys  record the festival of Bron, Bishop of Caiseal Irrae, in Ui Faichrach-Muaidhe. Again, under the head of Caisiol Iorra, Duald Mac Firbis, records Bron, bishop of Caisiol-Iorra, in Hy Fiachrach of the Moy. These authorities also have his death, at A.D. 511, which agrees with the chronology, in the Annals of the Four Masters. This year is usually regarded as that, in which he died. Our saint appears to have been interred at Cassel-Irra. The people of Killaspugbrone do not at present know the Patron Saint or Patron Day of this Parish, the latter observance having been discontinued long since. St. Biteus of Caissel-ira is supposed to have become bishop there after A.D. 512, the year succeeding that in which Bronius died; and, accordingly, he must have been very young, when he was a disciple of St. Patrick. He is said to have been buried at Rathcunga. We are not able to add, any additional particulars to elucidate the episcopacy of the present St. Bron; nor do we find that special Acts remain, to make his biography more complete.