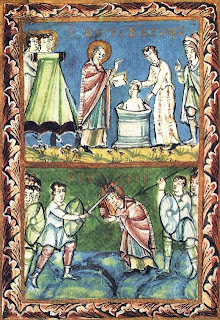 On June 5 we commemorate the memory of Saint Eoban, a disciple of Saint Boniface, who shared in the martyrdom of his master. There is a tradition that Eoban was an Irishman, indeed, Canon O'Hanlon and his contemporaries expended much ink and effort in trying to prove that Saint Boniface himself was Irish. What is certain is that Ireland can claim some share of the credit for the Saxon mission to the Germanic tribes of Europe, since Irish monasteries like Rathmelsigi played an important part in training many of the missionary saints who took part. In his account of Saint Eoban below, Canon O'Hanlon recounts the history of the saint's relics, which were translated on more than one occasion:

This holy man, who is claimed to have been an Irishman, was a companion of St. Boniface, Apostle of Germany, in preaching the Gospel, especially to the Frisons. As we have already seen, he was set over the See of Utrecht, by St. Boniface, to administer its affairs, as an assistant Bishop or Chorepiscopus. The duties of this office, he discharged with great fidelity and fruit. When St. Boniface arrived at Utrecht, in the summer of 755, he brought St. Eoban with him to the more northern parts of Frisia, the circumstances and results of which expedition are recorded in the preceding Article. St. Eoban shared in the martyrdom of St. Boniface, and therefore his festival is to be assigned to this day. He is recorded as foremost, among those persons whose names have been preserved, in the accounts given of that trial, which procured for him an eternal crown. In the first instance, the remains of the Bishop St. Eoban with those of the Priest Adalarius were conveyed to the Monastery in Utrecht. There, they were honourably enshrined, and these were regarded as most distinguished among the martyred companions of St. Boniface. It has been asserted, likewise, that the bodies of St. Eoban, the Assistant Bishop of St. Boniface, and of the Priest Adalarius, were elevated in coffins, with those of other saints, in the Church of Our Saviour, and which formerly had been called the Church of the Holy Trinity. Their names had been formerly invoked, in the Litanies of the Church of Utrecht. However, after the lapse of some years, those remains were brought to Fulda. There, they were placed in a shrine, near the body of the holy Martyr, and Pastor of Souls, St. Boniface. Again, it is stated, that the bodies of St. Eoban and of St. Adalarius were brought to Erfurt, where they were honourably enshrined, in the Monastery of St. Mary, the Blessed Virgin. Eoban's remains were placed towards the south, within the church, and those of Adelarius towards the north. This Monastery had been founded by St. Boniface; however, after the lapse of ages, it became ruinous, and fell down, but without injury to any person. In the year 1154, it became necessary to rebuild it; when, on the Twelfth of the May Kalends, the bones of St. Adalarius were translated, and on the Seventh of the August Kalends, those of St. Eoban were removed. At the time of this Translation, a wonderful fragrance seemed to issue from their remains, and to the great admiration of all who were present. Nay more, several blind, lame, mute, deaf, insane, leprous and epileptic persons, who were there, miraculously recovered. The fame of these cures attracted infirm persons, who lived even at a great distance. Wherefore, Arnoldus, Archbishop of Mayence, decreed, that the clergy and people of Erfurt should annually and devoutly observe the Festival of this Translation.

The veneration of St. Adelarius, Bishop and Martyr, is prescribed as a Double, at the 20th day of April, in the Breviary of Erfurt; while that of St. Eoban, Bishop and Martyr, is assigned to the 26th of July. In the year 1633, and on the 28th of October, a public examination of those relics took place before the Dean and Chapter of Erfurt. When the relics had been taken down and exposed, with all due reverence, in the tombs were found two wooden effigies, in the shape of human bodies. One of these contained the remains of St. Adelarius, and the other these of St. Eoban. The front of those cases only presented the carved shape, while the back was found to have been hollowed out; and, within the hollow were the various bones of each body, covered in with linens, and fastened down with pieces of wood and nails. At the 5th of June, David Camerarius has an entry of St. Eoban, Martyr, as a Scottish Saint. The Bollandist editor of the Acts of St. Boniface takes an unwarrantable liberty with his text, in making him identical with Alubertus, who is stated to have come from Britain and from the nation of the Angles.