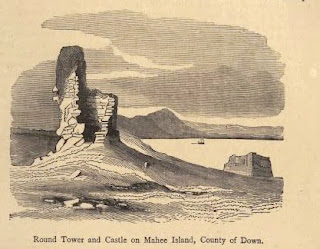 June 23 is the feast of a northern saint who features in the hagiography of Saint Patrick, Mochaoi (Mochay, Mochae) of Nendrum, County Down. The saint seems to have been first called Caolan, from the Irish word caol, meaning slender. The account below has been taken from the work of the nineteenth-century diocesan historian, Father James O'Laverty. The author is rather more definitive about the dates of the Patrician mission than modern scholars, but before the 1960s it was common to find a trust in the basic historicity of the Lives of Saint Patrick, and an acceptance of the year 432 as the starting date of his mission. Father O'Laverty's account brings together the evidence from the hagiography of Saint Patrick, as well as of other saints to whom Mochaoi acted as tutor:

Mahee Island, or Inis-Mochaoi, is so-called from its patron saint, Mochay, who was at first called Caolan. This Mochay is described in the ancient biographies of St. Patrick as a favourite disciple of that great missionary. Aengus's tract"de Matribus Sanctorum Hiberniae" says, "Bronach, daughter of Milcon, with whom Patrick was in captivity, was the mother of Mochay of Aendrum." The circumstance of his conversion is related as follows :—As the saint journeyed from Saul to Bright to convert an important personage, named Bos, who resided in the latter place, he saw a youth herding swine and preached to him. The boy at once obeyed the divine call and was baptised, and having learned all that was necessary with a rapidity which could only be attributed to a supernatural gift, was ordained a priest, or, as the Irish Tripartite Life tells it; "As Patrick was then on his way, he saw a tender youth herding swine, Mochae his name. Patrick preached to him and baptised him, and gave him a copy of the Gospels and a reliquary." The conversion of Mochay or Caolan occured before St. Patrick went to Tara, and we cannot assign to it a later date than 433. Mochay was then a "tender youth," that is, we may suppose, about fourteen or fifteen years of age; he must therefore, have been born about the year 420, and as the Annals of Ulster have recorded his death at the year 496, though the true date is 497 as given in the Annals of Tighernach, it is not unreasonable to assign the year 450 as the foundation of the church of Mahee. That little island soon became not only the seat of piety, but also of education. Colman, the founder of Dromore, and Finian, the founder of Moville, studied under Mochay. The ancient biographer of St. Colman tells the following story regarding his school-days in Mahee :—" After this he was handed over by his parents to the holy Caylan, the Abbot of Nendrum, to learn letters under him ; he diligently taught him and impressed good morals on him. And as he was progressing in age and good morals on a certain day when he had committed his task to memory, he asked the Father Abbot what he ought to do besides. The spiritual father replied—Break into little pieces that rock, over which the brothers stumble when they are going to Matins. This he preformed by making in the first place the sign of the cross upon it. A second time he inquired what more he should do. The Abbot asked him—have you done what was told to you? He, who professed true humility, answered—God indeed has done it. Caylan said—Throw the fragments of the stone into the sea close by. This he did, with angels assisting him. From this circumstance, those fragments reunited together by Divine power are called, Colman's Rock." No doubt, some rock along the coast of the island is the subject of this curious legend, but as the descendants of the ancient Irish have been long since banished from that locality all the ancient traditions have perished. St. Mochay, as a schoolmaster, seems to have followed the advice of King Solomon, "He that spareth the rod hateth his son." So at least it would seem St. Colman, his pupil, thought, as the following incident related of St. Finian in the old life published by Capgrave in the Legenda Angliae, sufficiently indicates. "After this, on the arrival of Colman, the docile boy is given to him to be taught. He instructed him for years in all obedience and humility. It happened once whilst the blessed bishop raised his hand to strike on some account with the rod the holy boy, who was engaged reading, an angel of the Lord caught the hand and held it raised up in the air. At this event, Finian prostrating himself on the ground said—My father why do you not strike me'? and he answered— Child I wish to do that but I am prevented by a Divine influence, if you then desire to be beaten (flagellari) you must go to another master, for from this hour I never will correct you. And he sent him to Caelan, the abbot of Noendrum, and he carefully commended him, that he should have a care for his body and his soul. But he, looking on the countenance of the youth said—This boy never shall be my disciple, for truly in heaven and on earth he far surpasses me in honour and in merit, for he will be a bishop renowned for wisdom and conspicuous for religion and holiness. On hearing this, Finian, moved with a prophetic spirit said—without delay you shall see one come hither, whom I will follow, and under whom I will learn, who will assist me in all my difficulties. And lo! the ships in which was the very holy bishop, by name Nennio, with his people coming out of Britain, entered the harbour in front of the monastery. After these were received with joy and honour, the above mentioned fathers (Colman and Mochay) with all diligence commend the youth to the venerable bishop. He sailed with him, on his return to his own country, and in his place, which is called the Great Monastery, the good monk learned, during some years, the rules and institutions of the monastic life, and he applied himself, with no little success, to the pages of the sacred Scriptures, and through the invocation of the name of Christ, he performed many miracles." See Book of Hymns. The holy bishop who took charge of the young Finian was one of the successors of St. Ninian in the celebrated monastery of Candida Casa or Whiterne in Galloway, and the harbour at Mahee, where he landed and whence they sailed, is probably in the state in which it was fourteen hundred years ago.

St. Mochay was both an abbot and a bishop; the old Lives of St. Patrick relate that the national apostle raised him to the episcopal dignity and bestowed on him a crozier, which was in after times called "the flying crozier,"—Eteac Mochai—which was long preserved in Mahee and believed to have been sent from Heaven to him on a certain day, as he was receiving instructions from St. Patrick. The circiunstance is thus related in the Irish Tripartite, "And he gave him also another time a bachall, which had been given them from God—viz., its head into Patrick's bosom, and its end into Mochay's bosom, and this is the Detach-Mochae (the flying crozier of Mochay) of Noendrum." Jocelin relates that, "he profited much the Church of God by his conversation and by his example; and being renowned in virtues and in miracles, was called to Heaven and he was buried in that church wherein he had worthly served the Lord." The Annals of Tighernach record his death at the year 493, though under the year 496, the Annals of the Four Masters enter "Mochay Abbot of Nendrum, died on the twenty-third day of the month of June." His name is thus commemorated in the Martyrology of Aengus on the 23rd of June, the day of his festival. " The renowned and prosperous champion of Noendrum, I celebrate" on which there is the following gloss :—" i.e.— Mochoe of Oendruim in Delvin, or nine hills that are in the place wherein is his church. Or Oendruim, i.e. one hill, is the entire island, and in Loch Cuan (Strangford Lough) it is." Ussher states on the authority of the writer of his Acts that St. Mochay was promoted from the Abbey of Nendrum to the See of Down, and hence Ware makes him the first bishop of that See. The Acts, or Life, to which Ussher refers, are unfortunately no longer accessible, and it is therefore impossible to say whether this was stated by that author as a fact, and not rather as a probable conjecture. However, be this as it may, St. Mochay was succeeded by a long line of successors, who, combining the sabbatical with the episcopal dignity, ruled for many centuries the see of Nendrum, until it finally merged into that of Down. But it would seem that the See of Down at all times exercised some superiority over that of Nendrum, or at least exacted a tribute from it. Jocelin states, "And as Patrick had advanced this man (St. Mochay) from the care of swine, into the episcopate, a swine is yearly taken from that territory, and paid into the Church of Down." The same circumstance is related in the ancient Irish Tripartite " And Mochay promised Patrick a shorn pig every year. And this, indeed, is still given."