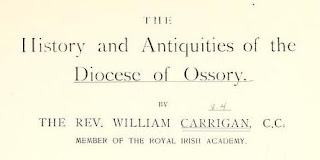 November 5 is the commemoration of another Irish Saint Colmán, this one associated with a parish now called Dysart, but originally known as Glen Delmaic, as the Martyrology of Oengus records:

very full of God's grace was Colman of Glenn Delmaicc.

In his diocesan history of Ossory, Father William Carrigan locates our saint at the parish of Dysart:

The church of Dysart, otherwise Dysartbeg, is situated on the grassy, low, sharp angle formed by the River Nore where it washes the rocky base of the Dysart ridge of hills. The Irish word Diseart pronounced (Deesharth) signifies a secluded place; and the site of Dysart church, hemmed in on three sides between the hill and the river, and approached by a gradual slope on the remaining side, is preeminently such...

In Fitzrobert's charter it is called Dysartmocholmoc, i.e., "Diseart Mocholmog", the Dysart of St. Mo-Colm-óg or Colman. From this it is evident that St. Colman was the patron of the place. The saint is thus commemorated in the Feilire of Aengus, at Nov. 5th.: