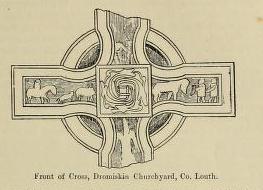 November 18 is the feast of a seventh-century County Louth abbot, Ronan of Dromiskin, a victim of the dreaded Buidhe Chonaill plague of the 660s. When I first began to look into the details of the saint's life I was confused by references to a Ronan of Drumshallon, who may have been the same person. In the extract below however, from a 19th-century antiquarian paper on the monastic history of County Louth, this confusion is put down to the great 17th-century hagiologist, Father John Colgan, having been somewhat imprecise in his terminology regarding the location of Dromiskin:

THE earliest mention of Dromiskin, or, as it would be more correctly spelt now, Drumiskin, is the establishment there of a church, or monastery, by St. Patrick

to which Colgan appends this note:

a remark which, evidently, misled Archdall, Lanigan, and others, as to its position, which they assigned to Drumshallon, within four miles of the municipal bounds of Drogheda.

The neighbouring abbey of Louth maintained its ecclesiastical position much longer than did that of Dromiskin. It may appear improbable that two churches, each intended to be a centre of missionary work in a country only dimly illuminated by a glimmer of Christianity, should have been established and built about the same time, at Dromiskin and at Louth, within six miles of each other, but it is really not so. The fertile plain of Muirtheimhne was a granary for the marsh and forest country on its west, which grew comparatively little corn, and for the mountainous districts to the north, which mostly reared cattle. The beauty of its gently undulating surface attracted the notice of the apostle as he travelled northwards from Munster, after his seven years' sojourn there.

Dromiskin lay close to the high road leading to Ulster, along the shore of Dundalk bay. It seems evident that the founding of a church at Dromiskin must be assigned to this time, for the first presiding bishop or abbot of the establishment was Lugaidh, son of Aenghus, King of Munster, who had been baptized by St. Patrick, at Cashel, while he was in the South of Ireland. Colgan mentions another disciple of the saint as being at Dromiskin at the same time, Dala, or Molua of Creevah, but of him we know nothing further here. Lugaidh is numbered among the saints of Ireland. He died A.D. 515 or 516, and his festival is November 2nd…

The next abbot at Dromiskin, of whom we have any account, though he was not the next in succession, was Ronan, son of Berach. Berach was a disciple of St. Dagoeus, bishop of Inis Chaoin (Iniskeen), about the middle of the sixth century. A miracle, performed by him, similar to Elisha's, in 2 Kings iv. 42-44, as we are told, caused his master to say he was unworthy of such a pupil; and on his leaving, Dagoeus gave him a short staff (Bacull gearr), and a bell, which, under the name of Clogberaigh, was preserved, as a relic, at Cluan da lochia. However this may be, after leaving Iniskeen, he entered into the monastic state at Glendalough, and died Abbot of Cluain-Cairpthe, in Roscommon.

St. Ronan was a more remarkable character than his predecessor, St. Lugaidh, of whom we have but little more than his name and royal pedigree. His name occurs in history; he was venerated for a long time after his death, and is still remembered by a holy well at Dromiskin bearing his name. He is said to have suffered an indignity at the hands of Suibhne, son of Colman Guar, prince of Dalaradia, whom he denounced; in consequence of which Suibhne went mad after the battle of Magh Rath (Moira). If, according to Tighernach, this battle was fought in A.D. 637, St. Ronan must have been abbot before that year, and the period of his rule must have been a long one.

In the year 664 a pestilence, which broke out first in England, made its appearance in Ireland. Irish writers call it Buidhe Chonail, or the Yellow Jaundice. Among its numerous victims, St. Ronan's name is recorded. He died, November 18th. His relics, which we may presume had been carefully preserved at Dromiskin, were, one hundred and thirty-two years afterwards, placed in a shrine of gold and silver. But the Danes were even then coming into Ireland; forty-three years after that they had begun plundering in Louth, and it must have fallen into their hands soon after......