Star of the world, Catherine, helper of the Greeks 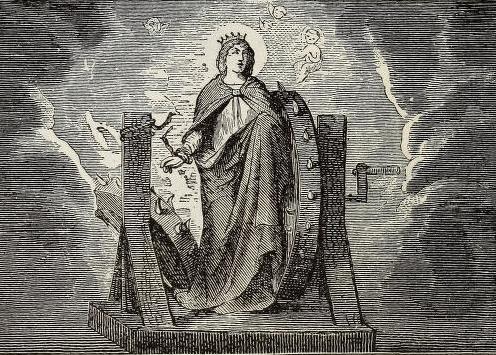 November 25 is the feastday of a saint much-loved in the East - Catherine of Alexandria. In common with other eastern martyrs, like Saints George and Margaret of Antioch, her cult flourished in the medieval West and accounts of her martyrdom appear in a number of European versions, including a fifteenth-century Irish one. I was particularly pleased whilst visiting the National Museum in Dublin to see on one of the reliquaries a figure of Saint Catherine, complete with her wheel, in the company of our native saints. They also join her in the medieval Irish poem, Réalta an chruinne Caitir Fhíona. Below is a  translation by Father Lambert McKenna, published as part of a series on bardic poetry in the Irish Jesuit periodical, Studies. I think it is a beautiful tribute to the great martyr and I love its presentation of our native saints as exemplars of the same holy virginity that Saint Catherine embodied.

1. Star of the world, Catherine, helper of the Greeks; she succours most of the races of every province there against death.

3. Bright brow has she, daughter of the King of the Greeks, who never accepted suitor; in the hue of her cheeks is the sheen and colour of the berry.

4. The berry's colour and summer sunshine is in her ruddy cheek; many the curl bending from its stem in her coifed hair.

5. In the shape of Catherine's round eyes no Grecian woman surpassed her; round eye that gazed on no young warrior; lips deep-red and white.

6. Face as apple-blossom; bosom as swan; maid inviolate; down is not whiter than her gleaming white hand; grey eye in fair cheek.

7. No maiden do I see like her in charm but I entreat her; may Mary's Son hide away my folly.

8. Brighid of Éire and Alba, Virgin of the Isles, she is the soft white bloom of virgins, ....

11. The Trinity, great Mary and Michael, the host of the sun, (and) eleven thousand virgins of the Búill, flower of fair maids.

9. Athracta of Cell Sáile in Críoch Conaill; but she is here connected with Luighne, Co. Sligo.

Interesting article. There is a carving of the saint at the ruined abbey at Mothel, Co. Waterford. I've many photos of the ruined building, but a good photograph of the carving has not been possible in my many visits, as the sun needs to be at a certain angle to show up the weathered figure, possibly part of an ancient table tomb. Am certain I've seen further carvings depicting the saint at other ruined churches around the country also!

Yes, Seán, there is a distinctive Irish dimension to the western cult of Saint Catherine. I finally managed to track down a copy of Arthur Spears' book on the subject which includes a gazetteer of all the Irish sites associated with her. She can be found everywhere from Donegal to Kerry. I'll hope to post again about this in the future.

One hymn for Saint Catherine in Greek: https://www.youtube.com/watch?v=UBdSFCozlcc