At April 9 we have a Saint Brogan or Brocan commemorated on the earliest surviving Irish calendar, the Martyrology of Tallaght. As this is a comparatively common name however, trying to identify this saint specifically presents a challenge. Earlier commentators wondered if he might be the same as a saint commemorated on June 27 or if he was a County Cork saint of this name mentioned in the Irish Life of Cork's patron, Saint Bairré (Finn Barr). It is probably impossible to say definitively,  Canon O'Hanlon brings the evidence together below:

Brocan is the simple entry to be met with, in the Martyrology of Tallaght, at the 9th of April. In the “Acta Sanctorum” of the Bollandists, following the same authority, the name of Brocanus is found, on this day. The Life of Bairre states that a Brogan, son of Senan, was a pupil of Bairre, that Brogan used to read three lessons every day with Bairre, until orders were conferred on him, and that he offered himself with his church, i.e. Cluain carna, to Bairre. The Calendarist then adds: I think that either this, or the Brogan, venerated at the 27th of June, is he who is mentioned here; for, every other person of the name is surnamed from a church, or from his father, except these only. There is a parish called Kilbrogan, in the County of Cork, and in it are the ruins of an old church, called Kilbeg, near Bandon. It would not be easy to decide, however, that it had any connexion with the present saint, and the remains there have much more a civic than an ecclesiastical look. Again the Martyrology of Donegal records on this day simply the name, Brogán. Some Acts of this holy man seem to have been collected, by Colgan, who intended to publish them, at this day. 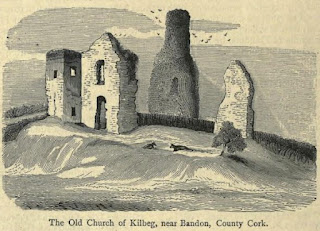