On April 8 we commemorate one of the abbots of Bangor, Saint Cennfaoladh. It seems from Canon O'Hanlon's account below that the site of Saint Comgall's famous monastery was one of those visited in person by him as part of his research:

ST. CENNFAOLADH, ABBOT OF BANGOR, COUNTY OF DOWN.

A MAN, who rendered essential service to the cause of religion, humanity, and civilization, deserves to be a beloved and respected historic celebrity. The present holy Abbot had a sensitive and chivalrous feeling, which urged him to labour for the correction of a great social evil, and for the emancipation of women, from a state of degradation, by no means creditable to the customs or policy of past times. In the "Feilire" of St. Aengus, his festival was commemorated, at the 8th of April. We find Cendfaoladh, Abbot of Bennchair, at the record, concerning him, in the Martyrology of Tallagh, on this date. From the same source, and at the same day, the Bollandists set down, Kinfseladius, Abbas Benchorensis. St. Cennfaoladh was the grandson to Aedh Breac, according to the Annals of Ulster, and those of the Four Masters. He became Abbot of Bangor, in the county of Down, most probably soon after the death of Cronan Slacu Caulne, whose departure is variedly placed, at A.D. 686, 688, and 690. However, it has been stated, on the authority of Fleming, that St. Kennfaelus was Abbot here, so early as A.D. 678. The place was called Great Bangor, by which the early Irish Annalists distinguished it from Bangor of the Britons, in Wales. It has been stated, that on the present site of the English church, stood the ancient one of Beanchuir, or Bangor. This, however, seems to me an inexact location, nor does it accord with the tradition of the inhabitants. The situation of the old monastery was undoubtedly within a vale, on either side of which two gentle eminences or ridges of land are to be seen.

And its locality well deserved the title of the Vale of Angels — which according to the old narrative it formerly bore — as well on account of its beautiful site, as also for the reason, that a numerous band of holy men sung the praises of the Almighty, on the spot, and for a long lapse of ages. In the beginning of the last century, Bishop De Burgo saw some ruins of Bangor monastery. Immediately adjoining the church, the ruined walls of an old building are even yet shown; and they lie, partly within the garden of the Rectory, or Glebe House, and partly facing the ornamental grounds of Bangor Castle, within the demesne enclosure, and not far from its entrance gate. Those ruins are situated, about one-half statute mile, from the waters of Bangor Bay. They are partly covered with trees and creeping plants. Although of some extent and height, they appear quite featureless, on the exterior, whence only the writer had been enabled to obtain a view of them. He was informed, by an intelligent inhabitant of Bangor who accompanied him, that the ancient cemetery extended a considerable distance, from these old walls, into the demense, as could be proved, from the quantity of human bones, removed from time to time, by labourers engaged in effecting improvements. He gave me to understand, that local traditions confirmed these disentombed indications of a former burial place; while the same traditions assigned the ancient monastic site to that place, where the present old walls are to be seen. 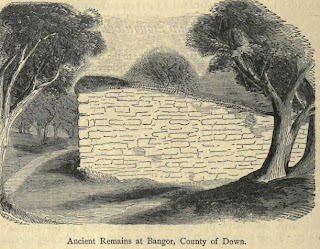 As we learn, from the Life of St. Comgall, Bangor was founded, about the year 558; and, before half a century had passed, it was in such celebrity, that a great number of monks flocked to it. From the earliest period, Bangor had been regarded, as belonging to the civil territory of the Ards. Among the Acts, which reflect such great credit on the memory of our Abbot, the Cain Adamnain states, that this Cennfaeladh was among the saints, who went security for liberating women from military service, from bondage, and from every other kind of slavery. He died, in the early part of the eighth century, on the 8th of April, A.D. 704, according to the Annals of Ulster, and of the Four Masters. According to the Martyrology of Donegal, St. Cennfaelad, Abbot of Bennchair, was venerated on this day. In an Irish Calendar, preserved at the Royal Irish Academy, the same statement is made, but the year given, A.D. 674, seems to be assigned for the date of his death.

This feast is in the Calendar, compiled by Rev. William Reeves. We find him recorded, in the Scottish Kalendar of Drummond, as a holy confessor, at this date, assigned for his departure to Christ. The life of a true saint should not only be aglow with promise, like the bright mornings of Summer; but, it ought to become still more mellowed and beautiful, like the evening's setting sun. As the Autumn proves its richness, with the golden sheaves and luscious fruits, so must good works and words ripen into merit, towards the harvest time of a well-spent existence.