April 22 is the commemoration of a saint of Glendalough, the famous monastic foundation of Saint Kevin. As Canon O'Hanlon explains, Saint Rufin (Rufus, Ruiffine, Ruffinus) may also have a connection with the northern monastery of Bangor:

ST. RUFIN, BISHOP OF GLENDALOUGH, COUNTY OF WICKLOW, AND OF BANGOR, COUNTY OF DOWN.

ACCORDING to accounts, furnished in our Calendars, this holy man appears to have enjoyed the episcopal dignity—or, at least, he led a religious life, in two different and very distant localities of Ireland. Thus, St. Rufin, or Rufiinus, is said to have been Bishop of Glendalough, in the county of Wicklow, and, likewise, to have been of Bangor, in the county of Down, according to a statement, furnished by Archdall, and, on the authority of Ward. This is to be found, in the Historic Dissertation concerning the country of St. Rumold, as postfixed to his Acts. In the Tallagh Martyrology, the festival "Rufini Glinn da locha" is entered, at the x. of the Kalends of May, corresponding with the 22nd of April. In this instance, therefore, nothing is to be found, which warrants an assumption, that he was bishop. Nor, do we find any reference to him, in the Annals of the Four Masters. He seems to have had a religious connexion, both with Bangor and with Glendalough; and, probably, he exercised the monastic profession, in both places. We are inclined to believe, however, that Rufin possibly received his education, only at Bangor; for, his name does not appear in the list of its abbots, or bishops, which has come down to our times. It may be, that this holy man, attracted by the reputation of the great St. Kevin, left Bangor, to place himself under direction of such a master of the spiritual life, and, in his quiet retreat, at Glendalough; for, both appear to have lived as contemporaries, some time after that monastic establishment had been built by the founder... 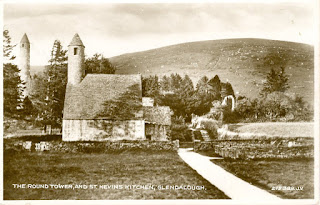 ...St. Kevin is said to have died,in the year 617, or 618; while St. Rufus is made to precede St. Colman, Abbot of Glendalough, who departed on the 2nd of December, 659. Therefore, we may suppose him to have lived, about the middle of the seventh century. From notices regarding St. Rufin, and the position he is made to occupy, we should be inclined to infer, that he must have immediately succeeded St. Kevin. Our holy bishop's name, Rufin, sometimes rendered Rufus, usually occurs after that of Molibba; but, the date for his death has not transpired. It is likely, St Rufin had been interred at Glendalough. According to Ward and Archdall, St. Rufin's commemoration was observed, on the 22nd of April. His name appears, in the Martyrology of Tallagh, at the same date, and it is entered, as Rufin Glinn da locha, while to this should probably be added, Bennchair. It is registered, in the Martyrology of Donegal, that veneration was paid, on this day, to Ruiffine, Bishop of Gleann-da-loch, and of Bennchar. The name of this saint has received the Latin form, Ruffinus. At the x. of the May Kalends—corresponding with April 22nd—the Irish Calendar, which is in the Royal Irish Academy, has an entry of this saint, in connexion with Glendalough and Bangor. Under the head of Glenn-da-locha, Duald Mac Firbis enters, Ruifin, Bishop of Glenn-da-locha, and of Bangor, at April 22nd.

Email ThisBlogThis!Share to TwitterShare to FacebookShare to Pinterest
Labels: Irish saints, Saints of Down, Saints of Wicklow