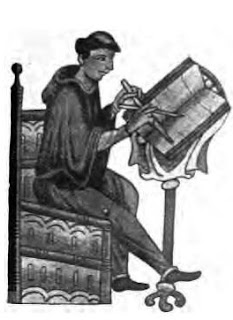 April 10 is the commemoration of an eleventh-century hermit saint, Paternus of Paderborn. The story of this heroic holy man, who lost his life in a fire which he himself had foretold,  is bound up with that of the Irish chronicler hermit Marianus Scotus who visited the cell which the blessed Paternus had occupied and saw the famous relic of the sleeping mat which had miraculously survived the flames. In his account below Canon O'Hanlon is keen to claim Paternus as an Irishman, as was the 17th-century hagiologist, Father John Colgan, who records him as a Scot. In the early Middle Ages Ireland was known as Scotia and its natives described as Scotti in the writings of continental commentators. Later the term was applied exclusively to Scotland and much to the chagrin of the Irish the monasteries in Germany founded by Irishmen, the Schottenklöster, were appropriated by the Scots. In relating the story of Paternus, Canon O'Hanlon also depicts his death as a testimony to holy obedience, for having prophesied the fire, the prophet refuses to break his hermit's rule and perishes:

In the remarkable self-imolation of this faithful servant of Christ, we must admire his observance of what he deemed to be a duty, and adore the inscrutable ways, whereby Divine Providence regulates the life of man. At the 10th of April, Colgan's list discloses the present saint's name.  It would seem, our national hagiologist had his Acts ready for publication, because being an Irish Scot, and celebrated by his countryman, the Blessed Marianus Scotus, the Chronographer, his glorious death caused him to be greatly reverenced in Germany. This St. Paternus is called a Scot,  and he is noticed in the Bollandists' colIection, where the circumstances related of him are set forth, in seven paragraphs.  From all we may reasonably infer, this celebrated recluse was born in Ireland, and probably, about the commencement of the eleventh century. Whether he became a recluse in his own country, or not, is hardly known; however, he seems to have left it, for the Continent, in order to adopt a course of life, attended with perfect self-denial, and practices of the greatest austerity. He travelled to Paderborn, in Germany, where a bishopric had been established, by the Emperor Charlemagne, about the close of the eighth century while its cathedral was consecrated by Pope Leo III  in person, during the year 796. Here, too, Charlemagne and other Emperors sometimes resided, and held diets of the Empire. Its Bishop became suffragan to the Archbishop of Mentz, a sovereign of the country, and a Prince of the Empire, while he ruled with extensive privileges. The name of this city is said to have been derived, from pader, "a rivulet," which rises just under the high altar of the cathedral, and from born, "a spring." In the beginning of the eleventh century, walls were built about this city. At the time of our saint’s arrival, there were two distinct monasteries in it; one belonging to the bishop of the place, and, probably, it was occupied, by a community of Cathedral Canons, while the other was in possession of a congregation of monks, to which Paternus belonged. In this very solitary place of abode, the Blessed Paternus lived for many years, quite retired from any commerce with the world. A year before his death, in a spirit of prophecy, he foretold a great fire, which should consume the city, where he dwelt, because of the sins of its people. This occurred in the year 1058. In it, he also perished; for, with the spirit of a martyr, Paternus refused safety, by a strict observance of his rule of life. As a demonstration of his sanctity, the mat on which he slept escaped the flames; and, it was afterwards held in great veneration, by the citizens of Paderborn. After his death, his sepulchre was illustrated by miracles, as Marianus Scotus relates.  The latter pious Irishman had set out from Cologne, on Monday after the Octave of Easter, A.D. 1059, with a view of becoming an inclusus, at Fulda. He resolved to visit Paderborn, on the way;  and, he tells us, that then, in the very cell, where Blessed Patern lived, he prayed on that same mat, which had escaped the flames. By the constant tradition and piety of the people of Paderborn, St. Paternus had been regarded from times remote, as one of the tutelary patrons of their city.  His name is recorded, by many writers and calendarists; such as, by Trithemius, Wion, Dorgan, Menard, Bucelin, Ferarius, Wilson, Camerarius, Dempster, and Simon Martin. Yet, the knowledge of Patern's place of sepulcher had passed away from the memory of the people, nor were his miracles distinctly remembered, in the latter times.  Citing Arnold Wion, Dempster notices the present saint, in his Calendar, at this date, and as belonging to Scotland. In terms of high commendation, St. Peter Damien, a contemporary, mentions this saint, in that apologetical Epistle he wrote, and (which referred to resigning the Episcopal office. His reflections are chiefly on the subject of Patern's devotion to duty, and on his leaving to the disposition of Divine Providence his own life, while a great public calamity was impending. The result of his trust, as the holy Cardinal observes, should cause us to fear, rather than question, the judgments of God. While it can scarcely be doubtful, that a prophet, who had a knowledge of the approaching destruction of a burning city, should have no revelation regarding his own death; the human mind may well cease to wonder, at the depths and mystery of the Almighty's terrible punishments inflicted on men, and in which so holy a servant paid the forfeit of his life, while so many were guilty of crimes, not expiated by a true change of heart.