April 4 is the commemoration of yet another of our obscure female saints, Coine of Kilkine, County Wicklow. The saint is referred to as Coine in the earliest of the Irish martyrologies and as Caoimhe in the latest. Caoimhe (pronounced 'Keeva') is the feminine version of the male name Caoimhin or Kevin, and thus tradition seeks to associate this holy woman with the great saint of Glendalough, also in County Wicklow. Saint Kevin's hagiography seeks to provide him with various family members, all of whose names embody the same element as his own, caomh 'fair' - thus his father is called Caomhlugh, his mother Caoimheall, his brother Caomhán, so it is no surprise to find that today's saint is said to be his sister. Canon O'Hanlon, having a dearth of information on this saint, concludes with some remarks on the veiling of women:

The great ones of earth pass away from life obtaining human applause, often undeservedly bestowed;but, the good should be held, in each Christians grateful and affectionate remembrance, as the present holy woman deserved to be known in her day. On the 4th of April, in the Martyrology of Tallagh, we find her name and place inserted, as Coini i-Cillé Coine. The Bollandists have it, Coina de Kill-Coine. There is a Kilkine old church, in the parish of Ballykine, in the County of Wicklow. The present saint may have been the sister of St. Kevin, founder of Glendalough, and, it seems not improbable, that she lived in the place previously mentioned; or, at least, we do not find any nearer corresponding denomination, on the Irish Ordnance Maps.

The old graveyard of the place is still much used, but only a few fragments of the old church walls are to be seen there; and the situation—a peculiarly retired one—lies within a well-wooded demesne, known as Whaley Abbey, near Avondale House and Demesne, as also, near the celebrated Meeting of the Waters. 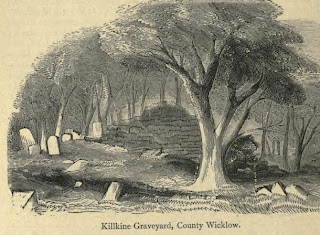 The festival, in honour of Caemh, Virgin, of Cill Caoimhe, was celebrated on this day, as we read, in the Martyrology of Donegal. The first successor of St. Peter, in his chair at Rome, had decreed, that all women should enter the churches, with their heads veiled, as a mark of respect for the holiness of God's House. In after time, this veiling of pious females was peculiarly a distinctive usage of religious Virgins.