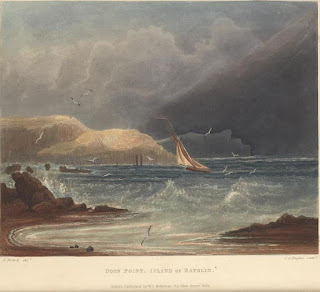 On April 7 we commemorate the memory of Saint Aedh, an eighth-century monastic of Rathlin Island. This island off the coast of north Antrim was part of the Kingdom of Dalriada from the 5th to the 8th centuries. It has an even more famous later Scottish association because, as every schoolchild here learns, it was whilst Robert the Bruce was hiding in a cave on the island from the English conquerors that he watched a spider continually attempt to bridge a gap using her web. Inspired by her patience and perseverance he too decided to give his own cause another try and returned to regain his throne. Canon O'Hanlon's account is also tinged by romantic imagination and his concluding comments are typical of the imagery of windswept desolation of former glories, which many 19th-century writers used to describe places associated with early Irish saints.

That Islands should be the places of residence, chosen by many early Irish missionaries, may be inferred, from the many instances of old ecclesiastical structures thereon, and from their religious discipline, which was essentially recluse. Other propagandists of the faith founded churches. With the Irish, the church was frequently a hermitage, and not a place for large congregations of the faithful. Many of our primitive churches were known as Cills, Kills, or "Cells." It improves the evidence in favour of Islands, within and around our shores, having been lone spots, such as anchorites would love, at the introduction of Christianity, rather than marts of trade or nests of pirates, for which they might be fairly taken, if we looked solely to their position. St. Aedh was son of Cairbre, and he became abbot of Rechrann monastery. We read, in the Martyrology of Donegal, that Aedh Oilein —or of the Island—was venerated, on this day. The place is now known as Rathlin Island, off the northern coast of Antrim.

It does not appear, that a church had been built there, before A.D. 630. This saint appears to have immediately succeeded St. Murghal, Abbot, who died A.D. 764. St. Aedh did not long survive him; for, he departed, in the year 768, according to the Annals of the Four Masters, or in 672, according to those of Ulster. The true year appears to have been A.D. 773. In the year 790, the shrines of Rathlin were destroyed, by the gentile pirates. It is probable, one belonging to this saint, as also, some shrines of his holy predecessors, perished. Thus, like the stranded ship, once filled with life and motion, many a house of prayer, in former times, lies lowly and desolate; while, in contemplating its melancholy wreck, with its peculiar and artistic beauty, the visitor's thoughts are subdued to reverence and prayer, when rejoicing in the living Faith, that survives the ruin of material temples.

Email ThisBlogThis!Share to TwitterShare to FacebookShare to Pinterest
Labels: Irish saints in Britain, Saints of Antrim