April 11 is the commemoration of an important monastic founder and saint of Leinster, Maodhóg of Clonmore, County Carlow. In his lengthy account of the saint in Volume IV of the Lives of the Irish Saints, Canon O'Hanlon illustrates many of the difficulties involved in researching the lives of our native holy men. First, there is the problem of our saint's name; nineteenth century commentators rendered Irish names in a variety of ways, so the saint may be called, for example,  Maidoc or Moedoc. I have used the form Maodhóg given in Professor Ó Riain's new Dictionary of Irish Saints. The name is a diminutive or pet form of the name Aedhan, itself rendered in a variety of ways, so our saint's name would literally translate as 'my young Aedhan'. Irish Names are also frequently given Latin forms in the medieval sources, so our saint is also called Aedanus. To confuse matters still further, Anglicized versions can reflect how the names are pronounced in Irish and thus our saint is also known as Mogue.  Secondly, Maodhóg of Clonmore is not the only saint to bear this name, he is probably less well-known than Saint Maidoc or Aidan of Ferns, commemorated on the last day of January.  Canon O'Hanlon is convinced that the lives of both Saints Maodhóg have been confused and that some of the incidents involving the holy man of Ferns really belong to the life of his namesake at Clonmore. Professor Ó Riain notes that although Maodhóg of Clonmore was obviously an important saint, he is not the subject of a written Life. His monastic foundation however, developed quite a reputation as a centre for the collection of relics. In one rather amusing anecdote, preserved in the Martyrology of Oengus, the somewhat over-zealous Saint Onchu, who was on a relic-hunting tour of the country, asked Maodhóg of Clonmore for a relic of his own person. Saint Maodhóg replied that that might be a little difficult seeing as he was still alive but finally agreed to cut off one of his fingers. The catch for Onchu,  however, was that Maodhóg prophesied that his relic-hunting journeys would cease and that both he and his collection were destined to remain at Clonmore.   I found Canon O'Hanlon's entry for this saint very heavy-going and so have omitted a lot of the details of battles, kings and so on, but the full text is available at the Internet Archive. I have also transferred the text of a poem which illustrates Clonmore's reputation in regard to relics from the footnotes into the main text:

THAT the present holy Abbot's memory had been revered and celebrated, at an early period, in the Irish Church, is evident from various circumstances. His recorded name of Maidoc, or Moedoc, was originally Aedhan; in Latin, it was Aedanus, and it has been Anglicised into Aedan. The Irish diminutive was Aedh-og; and, by prefixing Mo, or my, we have Mo-Aedh-og, or my young Aedh, hence comes Moedhog, or Mogue. Again, Momoedoc, Mionn Gaoidhel, or "my Maidoc, sacred pledge of the Irish," were words of endearment, applied to saints bearing this name. ..However, as there were three saints, bearing the name of Aedhan, or Maedoc, and who were very nearly contemporaries, in the absence of more ancient records, there can be no more embarrassing task for a student of Irish hagiology, than to fix their respective actions. Colgan apparently had a Life of Abbot St. Maidoc, of Clonmore, ready for publication, at this day; and, he promised, that at the 11th of April, much should be discussed concerning him. The Bollandists merely notice his festival, as occurring at this date, in the Martyrology of Tallagh but, they have evidently misprinted his name, which was to be met with in the original.

The received opinion is, that St. Aedhan, or Moedoc, of Clonmore, was descended from Dunlang, who was King of Leinster, at the close of the third century. In the old Book of the Borumha Laighean, the present holy man is called Aidus, son to Eugenius: in the Life of St. Comgall, he is named Aedinus, i.e. Aidanus, or Aedanus: by the Martyrologies of Tallagh, Marianus O'Gorman and Maguire, he is called Maidoc. The Menologic Genealogy of the Irish Saints enters his pedigree, in the foregoing sense; and, his family descent is to be found, likewise, in Dudley MacFirbis' Genealogies…

…The birth of our saint took place, probably before the middle of the sixth century, but the year is not known. This holy Abbot's chief house was situated, it is thought, at the present Clonmore, in the Barony of Rathvilly, and County of Carlow. The exact year when it was founded has not been ascertained; and now, there are no vestiges left of the ancient building… According to tradition, the whole valley, extending from Clonmore to Aghold, in former times, was called "Mogue's great glen," or "Mogue's big lawn," or "Meadow;" while a portion of Clonmore townland, to the westward of the high road, and south of the old castle and cemetery-ground, is called, at the present day, the Big Meadow. On the Ordnance Survey Maps, it is even thus designated.

The holy Abbot Moedoc died, at Clonmore, probably after the beginning of the seventh century; but the year of his demise has not been recorded. At Clonmore he was interred, likewise, and it would seem this place was remarkable, for the great number of holy persons, who reposed in its sacred soil. In St. Broccan's Poem, Lay of the Graves, as found in the "Book of Leinster," the poet says, he had not heard mentioned in any place a cluain like the holy cemetery of Aedh Find. It is thus translated, by William M. Hennessy: —

“And a cluain like the holy cemetery of Aedh-find, as I relate,
A delightful place of resurrection, in which are the relics of Erin's saints.
Nine score presbyters, five thousand manly nobles,
With Moedoc, descendant of Dunlang, are their graves." 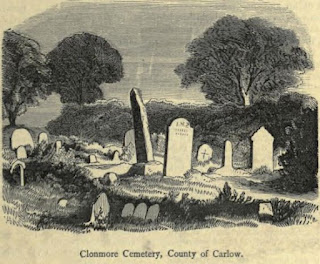 In the Feilire of St. Aengus, at the 11th of April, St. Moedoc is recorded, with a special commendation. Again, Moedoc h Dunlaing, in Cluain Moir, is set down, in the Martyrology of Tallagh, at this date. On this day is registered, in the Martyrology of Donegal, Maedhog, of Cluain-mor-Maedhoc, in Leinster. Aedh was his name, likewise, as we are informed.