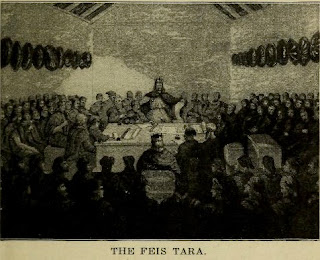 April 15 is the feast of Saint Ruadhán of Lothra, one of the Twelve Apostles of Ireland. Ruadhán is a saint about whom many stories are recorded, hagiography credits him with the cursing of the pagan stronghold of Tara and with many miracles. There is a scholarly paper on 'The Life of Saint Ruadán and the Cursing of Tara' which examines these traditions here.  Canon O'Hanlon has a long and densely-packed account of the saint and his miracles, but for the moment I will introduce him through a more concise entry, taken from a scholar of Irish folklore:

Ruadhán Saint who died c584 AD, founder of the monastery of Lothra (Lorrha, in north Co Tipperary). His name means ‘red-haired man’ and in modern form is rendered Ruán.

The several accounts given of him in Latin and Irish all derived from a lost biography, which was compiled in the 10th or 11th century. We read that he was son of one Fearghus Bearn on the royal Eoghanacht sept of Munster, and that he was educated by St Finnian of Cluain Ard (Clonard, Co Meath). When he went to Lorrha to found his monastery there, a fierce wild boar which had its lair in the hollow of a tree quitted the place so that he could have possession of it. He performed many miracles in different parts of Ireland, including finding their treasure for the people of Ros Éinne (in the Oriors area of south Armagh) who had forgotten where they had hidden it during a pestilence; healing the queen of Cualu (north Wicklow) who was afflicted by a dangerous blood-clot; and rescuing a ship caught in a whirlpool near Limerick. He had a wondrous tree at Lorrha, the sap of which provided full sustenance for all who tasted of it. The other saints of Ireland grew jealous of Ruadhán on account of this tree and of his holiness generally, but he reconciled them to him by entertaining them with a fine feast in Lorrha.

The most celebrated story of him concerned his conflict with the high-king Diarmaid mac Cearrbheoil, who seized a hostage from out of Ruadhán’s sanctuary and was elaborately cursed by the saint as a result. The two were eventually reconciled, and Diarmaid returned the hostage to Ruadhán in return for thirty beautiful dark-grey horses. These had come to the saint from a river, and they defeated the king’s own horses at racing. Soon after the king had acquired them, however, they raced away into the sea. Another legend has Ruadhán giving his own two chariot-horses as alms to lepers, and two stags coming from a wood to draw his chariot in their place. Several of the other miracles attributed to him involve healing the sick and raising from the dead people who were recently deceased.

The feastday of Ruadhán is April 15.