Feast of the Birth of Saint Colum Cille, December 7 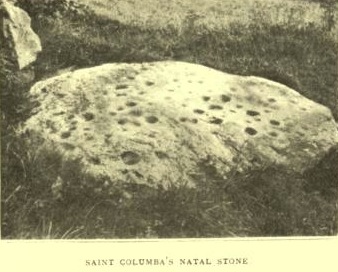 December 7 marks the feast of the birth of Saint Colum Cille (Columba), an event still remembered in the oral tradition and locality of Gartan, County Donegal. Another account of this feast can be read at my other site here, but below is an account of Gartan and its famous son from a 19th-century antiquarian guidebook.

St. Columbkille was born at Gartan, in the territory of Tirconnell, near the base of the Glendowan mountains.

Manus O'Donnell chief of Tir-Connell, who died in 1532, has furnished the fullest collection of the acts of St. Columba, the patron saint of Tir-Connell... Manus O'Donnell records how it was he who had ordered the part of this life which was in Latin, to be put into Gaelic, and who ordered the part that was difficult (i.e. very ancient Irish,) to be modified, and who gathered and put together the parts scattered through the old books of Erin, and who dictated it out of his own mouth with great labour and a great expenditure of time in studying and arranging all its parts, as they are left here in writing by us, in love and friendship for his illustrious Saint, Relative and Patron, to whom he was devoutly attached".

In this work Manus O'Donnell describes the territory of Gartan. "That land, Gartan, which lies in the County of Tir-Connell is desolate, even to the appearance of a wilderness, on account of the very lofty mountains which take up its whole extent to the north, but a declivity which is adjacent to the more cultivated plains and exposed to the rays of the sun, and lakes situate at the foot thereof, render it most delightful in the Summer season".

St. Columbcille was born on the 7th December, A.D. 519 (as Colgan, has the date), O'Donnell gives 520, and Reeves gives 521, as that most likely to be the true period; he was forty-two years of age when he removed to lona; his death occurring there thirty-four years later.

Around Gartan as the birth-place of St. Columbcille, shall always be centered a portion of the interest and veneration that is attached to his name.

The parish of Gartan extends north to Calabbar Bridge, where the road to Dunlewy branches off. Its western boundary skirts west of the Dooish mountain, as it rises 1994 feet over the waters of Lough Glen-Veagh. Through a chasm formed by some mighty convulsion, the Lough extends for a distance of about three and a-half miles in length, by an average of about four hundred and fifty yards in breadth. Here is ' Lone Glenveagh". The weird beauty of the place must be seen, it cannot be painted or sufficiently described...

...As we proceed south, its eastern confine passes through the centre of Lough Kibbon, (a corruption of its Irish name Loch-mhic-Ciabain) we reach Gartan Loch, or Lough Beagh, sheltering amidst the more "cultivated plains", mentioned in 1532 by Manus O'Donnell. This Lough extends in a south-westerly direction about two and a-half miles, with a more sinuous foreground, and is from a quarter to half a mile in width. Here on its banks St. Columbcille was born.

The lines of St. Mura of Fahan cited by O'Donnell and the O'Clery's are: "He was born at Gartan by his consent; And he was nursed at Cill-mic Neoin [Kilmacrennan] and the son of goodness was baptized at Tulach Dubhglaise [Temple-Douglas] of God".

Dr. Reeves observes that the local traditions decidedly confirm this Irish account. The writer, several years ago traversed every spot of this district, and stood on the flagstone pointed out by the people as St. Columbkille's Stone, that marks the place where it is traditionally stated he was born. This stone is to be seen to the S.W., in the townland of Lacoo.

The stone is about eighteen feet in circumference, and is indented with about sixty holes of average depth of two and a half inches. The flagstone itself is about six inches thick.

W.J. Doherty, Inis-Owen and Tirconnell - being some account of Antiquities and Writers of the County of Donegal (Dublin, 1895), 13-16.

Email ThisBlogThis!Share to TwitterShare to FacebookShare to Pinterest
Labels: Feasts, Saints of Donegal