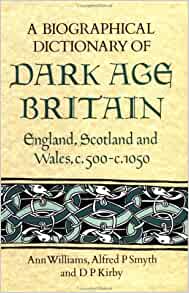 On 4 December the Martyrology of Oengus first commemorates two martyrs of the universal church and then records:


one of our noble elders was the
modest Fer da lethe (' man of two parts ').


Fer da lethe, 'man of two parts,' i.e. Berchán of Clúain Sosta in Offaly. Or Fer da lethe in Laid Treoit in Scotland. A priest was he.
Man of two parts, i.e. half of his life in the world and the other half in pilgrimage, ut ferunt periti.

The later Martyrology of Donegal elevates the priest to the status of Bishop but retains the title 'man of two parts':

BEARCHAN, Bishop and Apostle of God, of Cluain-sosta, in Ui-Failghe. He was of the race of Cairbre Righfoda, son of Conaire, who is of the seed of Heremon. Ferdaleithe was another name for him, i.e., he spent half his life in Alba, and the other half in Erin, as he himself said :

" At first we were in Alba,
The next first in Meath;
Truly it was not foolish sleep that I went bent on,
I did not find the face of a hero by sleeping."

and a later hand has added this note:


[" The four prophets of the fine Gaels,
Better of it the country whence they came,
Colum Cille, Moling the perfect,
Brenainn of Biorr, and Berchan."]

The man of two parts, perhaps appropriately, also has two feastdays. The Martyrology of Tallaght commemorates Berchán of Clúain Sosta on August 4. The existence of two separate feastdays has not been explained, it is interesting though that in Clonsast the people gathered at the holy well of Saint Berchán on 3rd December, which would be the eve of his feast on the 4th. Below is a summary of his life which accepts the August date as his feastday:


According to the Book of Leinster, Berchán, son of Muiredach was the great-grandson of Ainbcellach, a Scots king of Cenél Loairn who seized the Dál Riata kingship in 697-8 and who died in 719. Berchán became a cleric and settled in Ireland at Clonsast (Cluain Sosta) Co. Offaly, where he founded a monastery. He was remembered in Gaelic tradition as a prophetic writer and he is best known as the apocryphal author of the Prophecy of Berchán – a 12th-century Middle Irish poem of some 204 stanzas alleging to predict the quality and length of reigns of Scottish and Irish kings, beginning with the time of Columba and Áedán mac Gabhráin, and ending with Donald Bán (1093-7) son of Duncan I. Although the prophecies in the Scottish section are attributed to a fifth-century author, it seems clear that Berchán of Clúain Sosta was the person to whom the poem was originally attributed. Berchán is supposed to have uttered the first half of the work in c.718 and to have died c.778 which is not impossible if he were the great-grandson of Ainbcellach of Dál Riata. Although the earliest manuscript of the Prophecy dates to the 18th century, fragments of the work are preserved in the Book of Leinster, c. 1170, and the poem is seen as an 11th-century compilation. Berchán's festival was kept on 4 August. His name may be commemorated in the Scottish placename of Kilbarchan in Renfrew, while St. Braghan's Well survived at Clonsast into modern times. Berchán's nickname of fer-dá-leithe (Man of Two Portions) was explained in medieval tradition as referring to his two careers – one in Ireland and the other in his Scottish homeland.