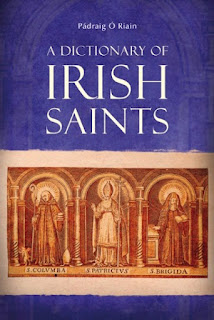 On December 9 we commemorated two of the daughters of Oilill, Feidhealm and Mughain. I mentioned then that Mughain has a second commemoration on December 15, at least in the locality of Cluain-Boirenn, which Pádraig Ó Riain identifies as possibly being modern Cloonburren, County Roscommon. It is only one of a number of localities associated with this holy lady, Ó Riain's Dictionary of Irish Saints lists various others, including Kilmoon in County Clare where traditional devotion continued at the holy well up until the early nineteenth century, even though a feast day was no longer remembered for the saint. The Martyrology of Donegal records:

whilst the earlier Martyrology of Gorman notes:

Mogain [1] against every great battle.

[1] a virgin, from Cluain Bairenn.

Reading Professor Ó Riain's research leaves the impression that this holy woman was once an important saintly figure, even if today her reputation is much more obscure.