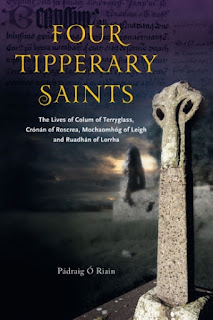 December 13 is the feast of a saint known for his ascetic life - Saint Columb of Terryglass, County Tipperary. Saint Columb (also known as Columba or Colman) was a disciple of Saint Finnian of Clonard, whose feast we celebrated yesterday, and features among that elite group known as the Twelve Apostles of Ireland. He was chosen by the 'Tutor of the Saints of Ireland' as the man to give his master the Holy Communion on his deathbed, as the Irish Life of Saint Finnian explains:


2646. Once he sent his pupil, even bishop Senach, to find out what the folk of his school were doing. Different, in sooth, was that at which each of them was found, yet all were good. Colomb, son of Crimthann, was found with his hands stretched forth, and his mind contemplative in God, and birds resting on his hands and on his head. When that was told to Findian he said : ' The hands of that man,' saith he, 'shall give me communion and sacrifice at the ending days.'

And this prophecy was fulfilled in a miraculous fashion:


2769. Now, when it came to the ending days of this holy Findian, his guardian angel sent him to Inis Mac n-Eirc on Luimnech, and brought Colomb, son of Crimhthan [with his gillie], with his book-satchel, on two clouds to Clonard. And Findian received communion and sacrifice from his hand, and sent his spirit to heaven at the end of a hundred and forty years.

Whitley Stokes ed.and trans. Lives of Saints from the Book of Lismore, (Oxford, 1890).

The Irish Calendars agree in recording Saint Columb's feast on December 13. The entry for today in the early Martyrology of Oengus reads:


13. For the dear multitudinous day,
may they come with many thousands,
Baethan the pious of Cluain,
Colomb the abstinent of Tir (dá glais).

while the later Martyrology of Donegal gives some information on the translation of the saint's relics:


COLUM, of Tir-dá-glas, son of Ninnidh, of the race of Cathaoir Mór, king of Erin, who is of the race of Labhraidh Lorc, son of Ugaine Mór, etc. ; and Mincloth, sister of Caemell, daughter of Ceannfionnan, son of Ceis, son of Lughar, was his mother.
Him Aenghus calls Colum Mac Crimhthainn, and other authors call him Mac Ui Cremhthannain. It was he that gave the sacrifice to Finnen, of Cluain-Eraird ; and he was a disciple of Finnen.
Macaoimhe, of Tir-dá-ghlas, and Odhran brought his relics to Inis Cealtra, as Ciaran of Saighir had foretold in his own Life, chap. 6, and as Mochaemhog had foretold when he was baptizing Odhran.